With iOS and iPadOS 15 now available to the general public, an assortment of questions and even rumors have started to circulate about jailbreaking.

Jailbreaking is a huge part of what we do here at iDownloadBlog, so today’s frequently asked questions (F.A.Q.) piece will attempt to answer some of the most common questions we’ve received about the state of jailbreaking iOS & iPadOS 15.

Since you’re probably itching for answers, we’ll jump right into things without wasting even another moment of your time. 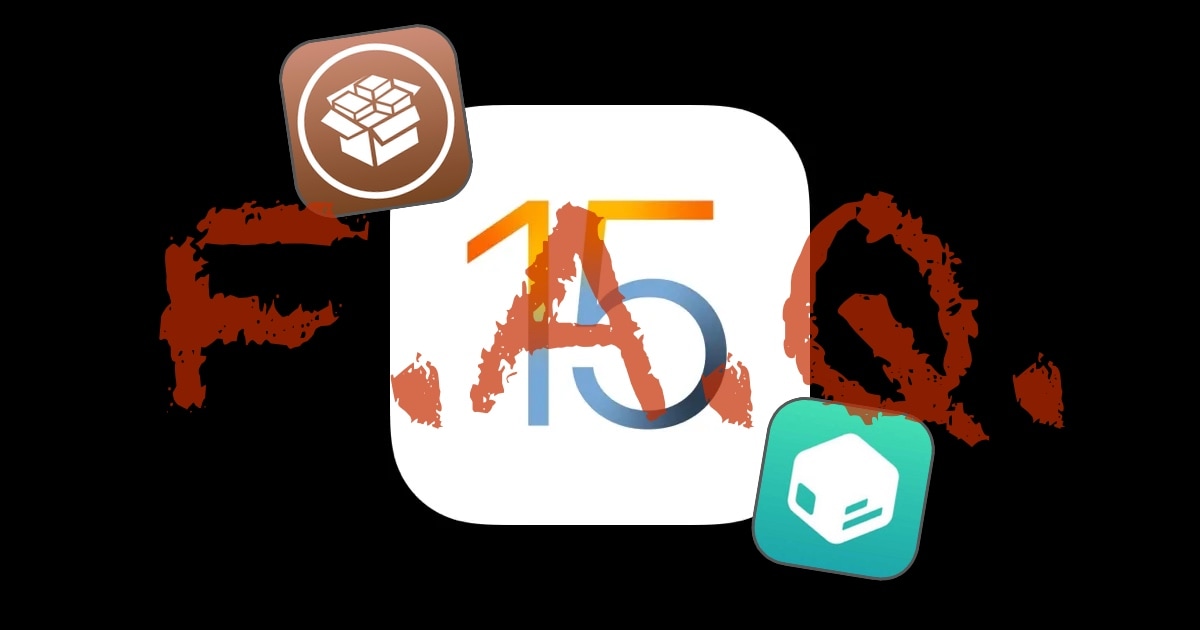 Can I jailbreak iOS or iPadOS 15?

At the time of this writing, there isn’t a public jailbreak available for iOS or iPadOS 15.

Even the venerable checkra1n jailbreak, which depends on an unpatchable hardware-based bootrom exploit dubbed checkm8, doesn’t work on iOS or iPadOS 15 (yet). This doesn’t mean that Apple has somehow managed to patch checkm8; instead, it simply means that the software side of checkra1n needs to be updated to support Apple’s new mobile operating systems.

As for other jailbreak solutions, we know that the Odyssey Team has started investing in test device(s) for iOS & iPadOS 15, but no other details are known at this time.

Will checkra1n be updated for iOS & iPadOS 15?

It’s very likely, however we don’t yet know when that will happen.

At the time of this writing, checkra1n will not work with iOS or iPadOS 15 out of the box. It’s not because checkm8 has been patched (that’s not possible on the devices that are already out there), but rather because Apple has introduced new software-based roadblocks that require circumventing.

The checkra1n team is currently investigating iOS & iPadOS 15 and attempting ways around Apple’s roadblocks, so we’ll just have to wait and see what becomes of it.

Is anyone working on a dedicated iOS & iPadOS 15 jailbreak?

Most hackers, security researchers, and jailbreak developers are hesitant to publicly share details about exploits or jailbreak progress until they’re ready to release them. You can thank the excessive amount of the beggars and ETA demanders for that. Frankly, people don’t want to be hounded by the general public when they get nothing in return for releasing free things, and we don’t blame them.

While we’re sure at least something is being worked on, we don’t yet have any confirmation on that at the time of this writing. Patience is advised, and iDownloadBlog will always keep our readers apprised of novel developments.

When will I be able to jailbreak iOS or iPadOS 15?

While the Pangu Team demonstrated at TianfuCup 2021 that it’s possible to jailbreak iOS 15, no one has actually released a jailbreak for this particular firmware yet.

We recommend staying patient as we wait for new developments to surface.

Can I restore back to iOS or iPadOS 14.8 and jailbreak?

No, you cannot downgrade to iOS or iPadOS 14.8 anymore unless you saved your .shsh2 blobs while the firmware was being signed. Apple stopped signing iOS & iPadOS 14.8 on October 4th.

But jailbreaking iOS or iPadOS 14.8.x is possible, so long as you have a supported handset.

Why are people saying that iOS & iPadOS 15 won’t be jailbreakable?

This is a misconception. Although Apple has made jailbreaking more difficult with the introduction of its signed system volume (SSV) security mechanism, there is no evidence to suggest that this will kill jailbreaking. It will instead affect jailbreak methodology, which simply requires finding new methods.

The fact is Apple makes it increasingly more challenging to jailbreak with each yearly iteration of iOS & iPadOS. People were saying the same about iOS & iPadOS 14 when it launched last year, and yet here we are with one of the highest assortments of jailbreak tool choices ever in the history of jailbreaking – checkra1n, Taurine, unc0ver, and perhaps soon, Manticore.

iOS & iPadOS 15 will most certainly be jailbreakable, but it will necessitate additional effort from our jailbreak teams to circumvent the new security measures.

Will future jailbreaks need to be rootless?

Because of Apple’s SSV security mechanism, some iOS & iPadOS 15 jailbreaks may go rootless. But that’s not a bad thing.

While previously released rootless jailbreaks seemed like they didn’t have as much to offer as current full-fledged jailbreaks do, developers from both sides of the aisle, including Hayden Seay from the Odyssey Team and Sam Bingner from the unc0ver team, have alluded to the idea that they know of ways around this.

Supposedly, it will be possible to make a rootless jailbreak feel just as capable as a full-fledged jailbreak – tweak injection and all. While precise details have yet to be fully publicized and the methods are likely to be different from one team to another, we are excited to witness the unfolding of innovation in this department.

Please note that the checkra1n team is attempting to make a non-rootless jailbreak by creating a separate volume for jailbreak-related assets, and it’s possible that other jailbreaks could follow suit.

Time and time again, we read comments from people say that jailbreaking is dead because iOS and iPadOS have already achieved greatness. This is patently false. If this was actually true, then jailbreak developers wouldn’t be producing jailbreak tools anymore. Where there’s demand, supply will be produced.

Jailbreaking will still make your iPhone or iPad do incredible things, even on iOS or iPadOS 15. For example, Apple let us down when they didn’t introduce an always-on display with the iPhone 13 lineup, and there are jailbreak tweaks that make this possible.

Other jailbreak tweaks of interest include those that enable Personal Hotspot when your carrier doesn’t allow you to, being able to truly theme your Home Screen’s app icons without bothering with Shortcuts, and having the choice to customize even the smallest facets of iOS and iPadOS that Apple doesn’t let you change out of the box.

We have tons of examples of jailbreak tweaks that make iOS and iPadOS great, you just need to dig through our plethora of roundups to find them. We’ll help you:

Will iDownloadBlog let me know when an iOS & iPadOS 15 jailbreak launches?

Yes, we absolutely will. Stay tuned!

Since there haven’t been any official announcements about an iOS or iPadOS 15 jailbreak yet, it’s difficult to estimate when one will be released. Still, history is on the jailbreak community’s side and our gut tells us that like every year, someone, somewhere is working on one.

If you have any other questions about jailbreaks or iOS & iPadOS 15 or anything in between, then feel free to drop a comment below so that others may chime in.