Excitement is swirling around in the jailbreak community Monday evening after hacker and iOS developer @__spv took to Twitter to share thought-provoking Tweets related to untethered jailbreaks.

Untethered jailbreaks, which have been a hot topic of conversation since security researcher Linus Henze demonstrated one on an iPhone 12 Pro Max running iOS 14.5.1 last week, are a type of jailbreak that continues to work even after rebooting the hacked device without having to re-run the jailbreak tool.

Among some of @__spv’s latest Tweets are the following, which suggests that the hacker is in possession of a working jailbreak untether that has been patched by Apple’s signed system volume (SSV) security mechanism: 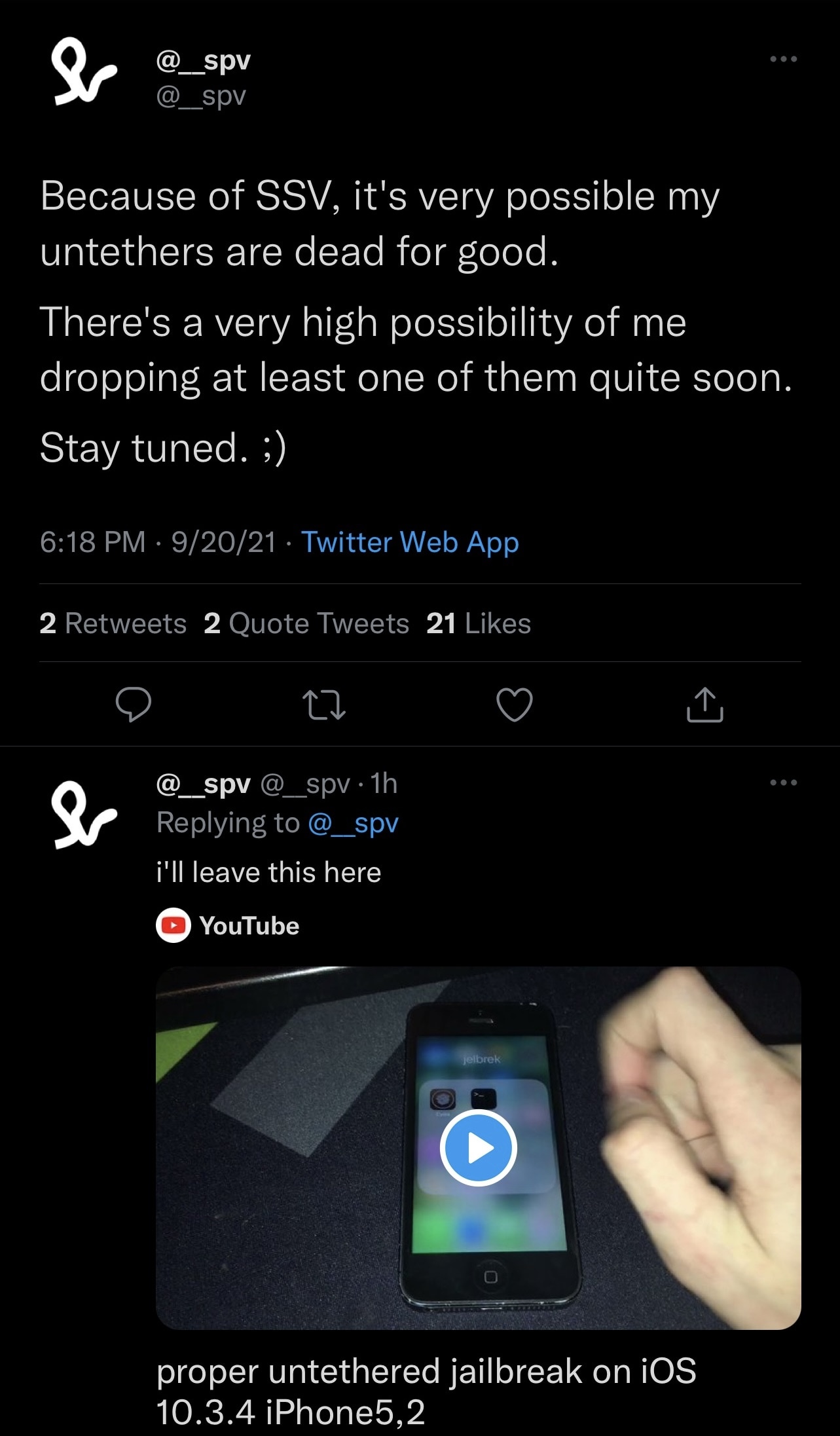 According to Apple, SSV verifies the integrity of system content at runtime and then rejects any data that lacks a valid cryptographic signature from Apple. The security mechanism is a step by the Cupertino-based company to thwart software tampering, which encompasses many forms of jailbreaking such as untethers.

iOS & iPadOS 15 appear to incorporate this new SSV security mechanism, and because of that, the untethers that @__spv has been sitting on are likely toast on versions post-iOS & iPadOS 14. Consequently, the hacker alludes to the idea of releasing at least one of those untethers to the general public.

None of the Tweets shared by @__spv this evening appear to clearly communicate which version(s) of iOS and iPadOS that the untether(s) would support, but another Tweet attached to the first contains a video demonstration of an untether working on an iPhone 5 running iOS 10.3.4. Albeit unconfirmed, other and likely even newer versions of Apple’s mobile operating systems up to and including iOS & iPadOS 14 may be supported by it. The video can be found below:

While none of the untethers discussed above have been officially released at the time of this writing, it’s worth noting that Odyssey Team lead developer CoolStar has already achieved arbitrary code execution post-reboot on a test device and that it would soon be released for iOS & iPadOS 13.0-14.3 users – likely those jailbreaking via Odyssey or Taurine.

In any case, it’s exciting to see so many untether announcements in a time when untethered jailbreaks were once thought to have gone extinct. An untether would eliminate the need to re-sign side-loaded jailbreak apps every seven days (Taurine and unc0ver) and would prevent users from having to connect to a computer to boot back into a jailbroken state (checkra1n).

It would be an understatement so say that, if released, an untether would be a supreme convenience and a morale boost for the jailbreak community. So it will indeed be interesting to see what happens after all of this is said and done.

Furthermore, it will also be interesting to see how the brilliant hackers of our community sidestep Apple’s new SSV protections, as they appear to be a significant pain point.

Are you excited about all the untethered jailbreak news circulating in the community these days? Share your thoughts in the comments section down below.