Untethered jailbreaks are something of a rarity these days, with most modern jailbreaks being either semi-tethered or semi-untethered variants instead. But a teaser by security researcher Linus Henze just one week ago manifested at least some hope that the community could witness one again soon, at least for the likes of iOS & iPadOS 14.5.1 and below.

And speaking of untethered jailbreaks, Odyssey Team lead developer CoolStar announced via the Sileo / Taurine / Odyssey Discord channel Monday evening that they had successfully achieved arbitrary code execution in a native iOS/iPadOS application after conducting a full reboot of the device. This is, of course, the hallmark feature of an untethered jailbreak.

CoolStar’s full announcement can be found below: 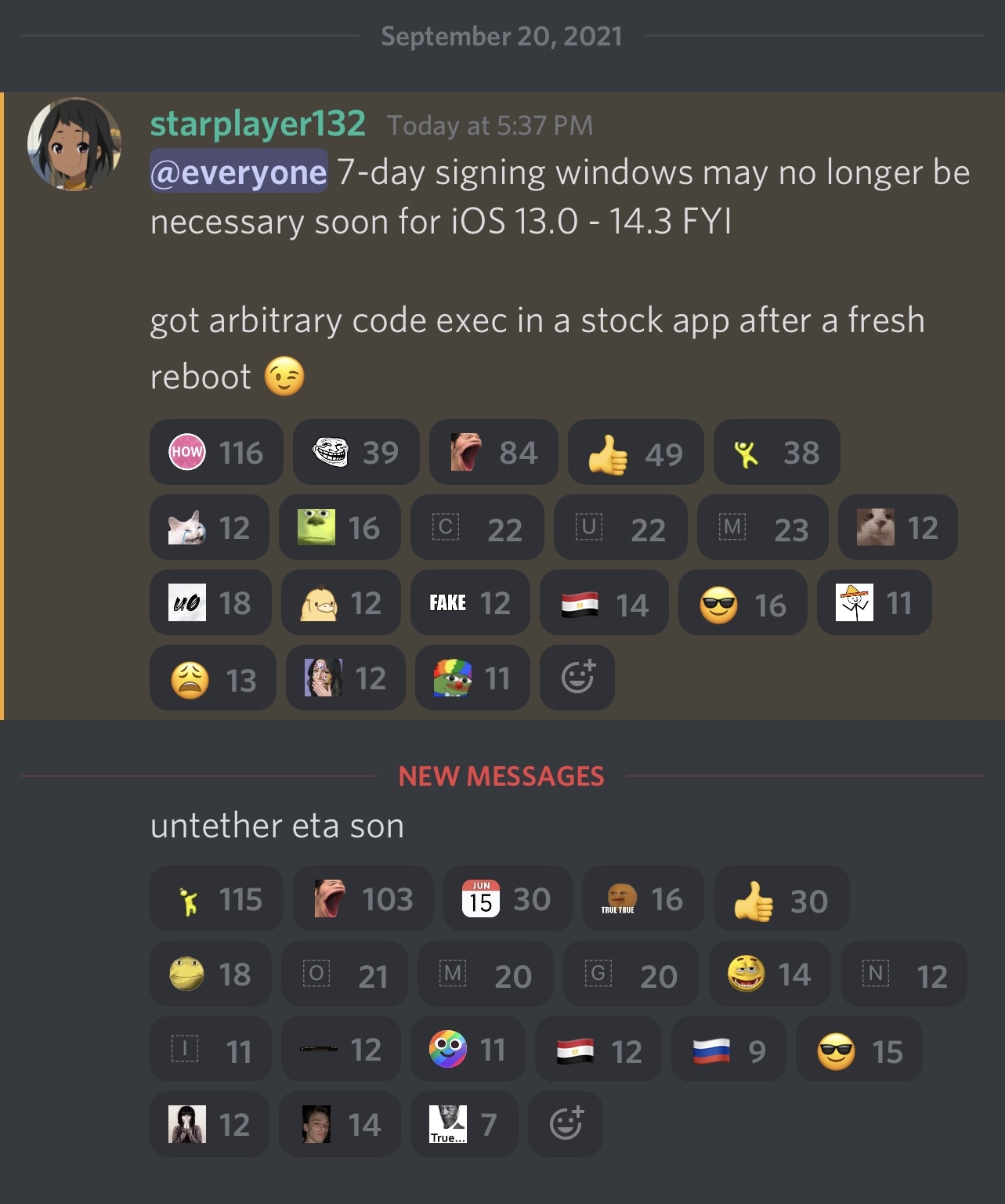 As a part of the flex, CoolStar added that “seven-day signing windows may no longer be necessary” for compatible devices running iOS & iPadOS 13.0-14.3. Notably, this encompasses all devices that are currently jailbreakable via the Odyssey Team’s Odyssey and Taurine jailbreak tools for iOS & iPadOS 13 and 14 respectively.

The seven-day signing window is a reference to using AltStore to re-sign the Odyssey or Taurine jailbreak app once per week in order to continue using it after rebooting your device. An untether would make this process unnecessary since users would retain their jailbreaks after rebooting their handsets.

In a follow-up comment, CoolStar concluded with “untether eta son.”

For what it’s worth, the untether that CoolStar appears to be working on won’t add support for any new firmware versions that the Odyssey and Taurine jailbreak tools can’t already jailbreak. Instead, it would only augment existing jailbreaks on iOS & iPadOS 13.0-14.3 with the freedom to reboot on a whim.

It remains to be seen if support for newer firmware could be added in the future, but it should be noted that CoolStar said only a week ago that the untether could work on iOS 14.5.1 and lower, which means there’s potential for further development:

Apple today released iOS & iPadOS 15 to the general public. Those interested in jailbreaking are advised to avoid this update, as it could be a while before we see any iOS or iPadOS 15-related developments.

If an untether drops for iOS & iPadOS 13.0-14.3, will you be taking advantage of it? Let us know in the comments section down below.