A fuzzy image circulating on jailbreak-oriented subreddits these past couple of weeks has received a lot of attention in the jailbreak community as of late, as it appears to depict iOS hacker and checkra1n team member @siguza commenting in a Discord channel about iOS & iPadOS 15 and the state of the checkra1n jailbreak. 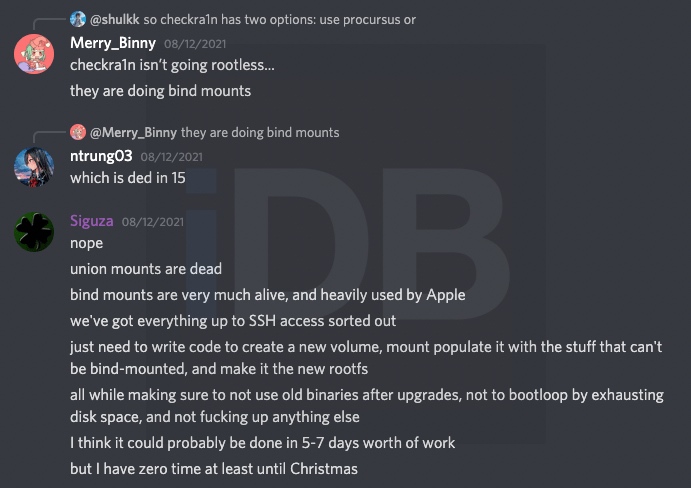 Those posts have since been removed from Reddit for unknown reasons; however, fascinated by the enlightening details, we reached out to @siguza directly via email to obtain a higher quality screenshot of those comments for our readers, which is depicted above.

From these comments, we can gather that the checkra1n team certainly plans to try and ship iOS & iPadOS 15 support. However, contrary to what some other jailbreak teams have alluded to, it doesn’t seem like checkra1n will be going rootless for iOS & iPadOS 15 despite the presence of Apple’s signed system volume (SSV) security mechanism.

@siguza’s comments mention how checkra1n could attempt to utilize bind mounts instead of union mounts on iOS & iPadOS 15 since the latter are essentially history, and that Secure Shell (SSH) access has already been sorted out for Apple’s newest mobile operating systems.

Instead of going rootless, the checkra1n team would try also to circumvent Apple’s SSV security mechanism by generating a new volume specifically for all the things that can’t be bind mounted. This volume would then effectively become the new rootFS since the root folder wouldn’t be accessible on such a jailbreak.

The checkra1n team hasn’t signaled when they plan to ship support for iOS & iPadOS 15, nor would we expect them to since there’s obviously a lot of work required to get around all the new security mitigations and a lot of people would nag the team for a completed product. The only thing we know right now is that @siguza is currently inundated by a busy schedule and won’t have time to work on checkra1n until at least after Christmas.

That’s not to be construed as an ETA, however.

@siguza reaffirmed in separate comments that a checkra1n update with preliminary iOS & iPadOS 15 support wouldn’t come before Christmas, and we assume it wouldn’t come immediately after either especially given the magnitude and uncertainty of the work involved:

Obviously, the checkra1n team doesn’t have a magic crystal ball that can tell the future, and therefore no member of the team can’t predict what types of roadblocks might hinder potential progress. While the checkra1n team would absolutely love to ship a project to users sooner rather than later, that simply isn’t realistic when the developers themselves have lives. In other words, it will be done when it’s done, so nagging the jailbreak developers is inadvisable.

The power plant behind the checkra1n jailbreak tool is an unpatchable hardware-based bootrom exploit dubbed checkm8 that works on all A7-A11-equipped devices up to and including the iPhone X. Supported firmware versions currently span iOS & iPadOS 12.0-14.8.1.