“Hey Siri” is an invaluable feature on iPhone, iPad, and other Apple devices that lets you invoke Siri without having to press any buttons.

Using nothing more than the device’s microphone, you can mutter the words “Hey Siri” from a distance and Siri will launch and wait for your command.

But what should you do if it’s not working as you’d expect it to? In this troubleshooting guide, we’ll go over a few things that could help you figure that out. 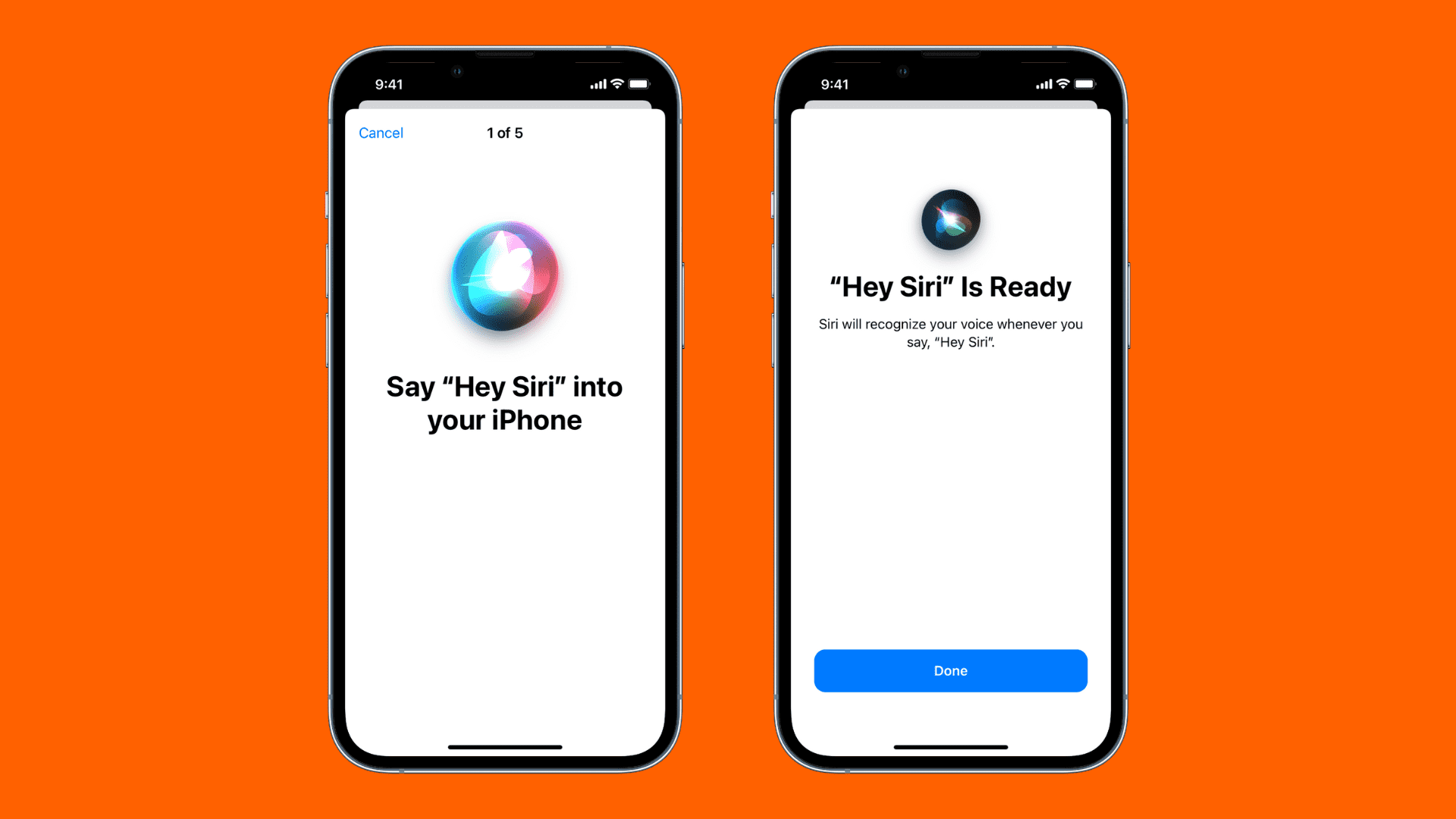 Fix “Hey Siri” not working on your iPhone or iPad

So you’ve been saying the words “Hey Siri” repeatedly, but Siri isn’t opening on your iPhone to take your command. What gives?

Here are a few things to look into:

Troubleshoot "Hey Siri" hide
1) Does your device have “Hey Siri” turned on?
2) Does your device support untethered “Hey Siri”?
3) Do you have an internet connection?
4) Keep your iPhone facing up, or do this
5) Reboot your device
6) Are there multiple “Hey Siri” devices nearby?
7) Is Low Power Mode turned on?
8) Update your iPhone
9) Try recalibrating “Hey Siri”
10) Set the appropriate Siri language
11) Check Siri’s availability in your country
12) Is your iPhone microphone working?
13) Are AirPods connected but not in/on your ears?
14) Ensure iPhone isn’t stuck in headphone mode
15) Reset all iPhone settings
16) Restore your iOS device
17) Contact Apple

Does your device have “Hey Siri” turned on?

The first thing you should do is check to make sure you have “Hey Siri” enabled on your device. It’s possible to have Siri turned on but “Hey Siri” turned off.

To see if you have “Hey Siri” enabled, open the Settings app and navigate to Siri & Search > Listen for “Hey Siri” and ensure that the switch is turned to the on position. 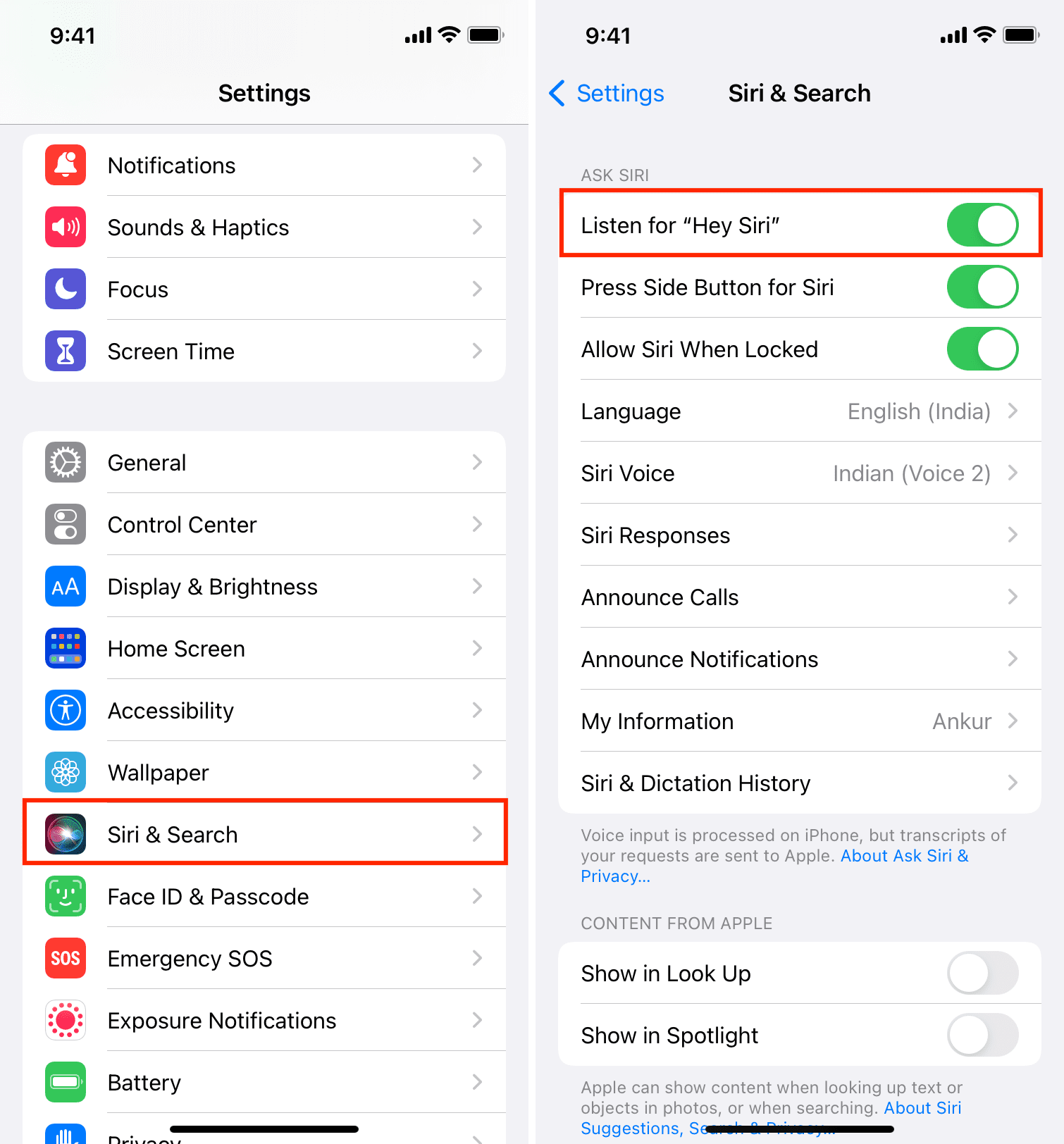 Not all devices support untethered “Hey Siri” functionality. With many old Apple devices, you have to be plugged into a power source, such as the AC adapter or your computer’s USB port, in order for “Hey Siri” to become active.

The iPhone 6s and newer and the 12.9-inch iPad Pro and newer support “Hey Siri” without the need to be connected to a power source.

If you are using any other device, such as an iPhone 6, iPhone 6 Plus, iPhone 5s, iPhone 5, or iPhone 4S, then you need to be connected to a power source. This is because “Hey Siri” can have high battery demands, and only Apple’s newer iOS devices are efficient enough to run the feature in the background without significant battery drain.

Do you have an internet connection?

Except for some basic commands, Siri requires an active internet connection to work, and so does “Hey Siri”. It can utilize either Wi-Fi or cellular internet, so long as it can establish a connection to Apple’s Siri request servers. If it can’t, you’ll get an error message.

It’s possible that you’re connected to a wireless router; still, you could be experiencing network problems. Therefore, verify that your internet connection works by opening Safari and trying to load a web page. If it works, then you know your connection is good. If not, try rebooting the router or using another Wi-Fi or cellular connection.

Keep your iPhone facing up, or do this

Your iPhone kept with its screen facing down won’t pick up and respond to your “Hey Siri” request. To address this, keep the iPhone with its screen up or enable Always Listen for “Hey Siri”, which will override iOS Facedown Detection and let you use handsfree Siri even when iPhone is face down or covered. 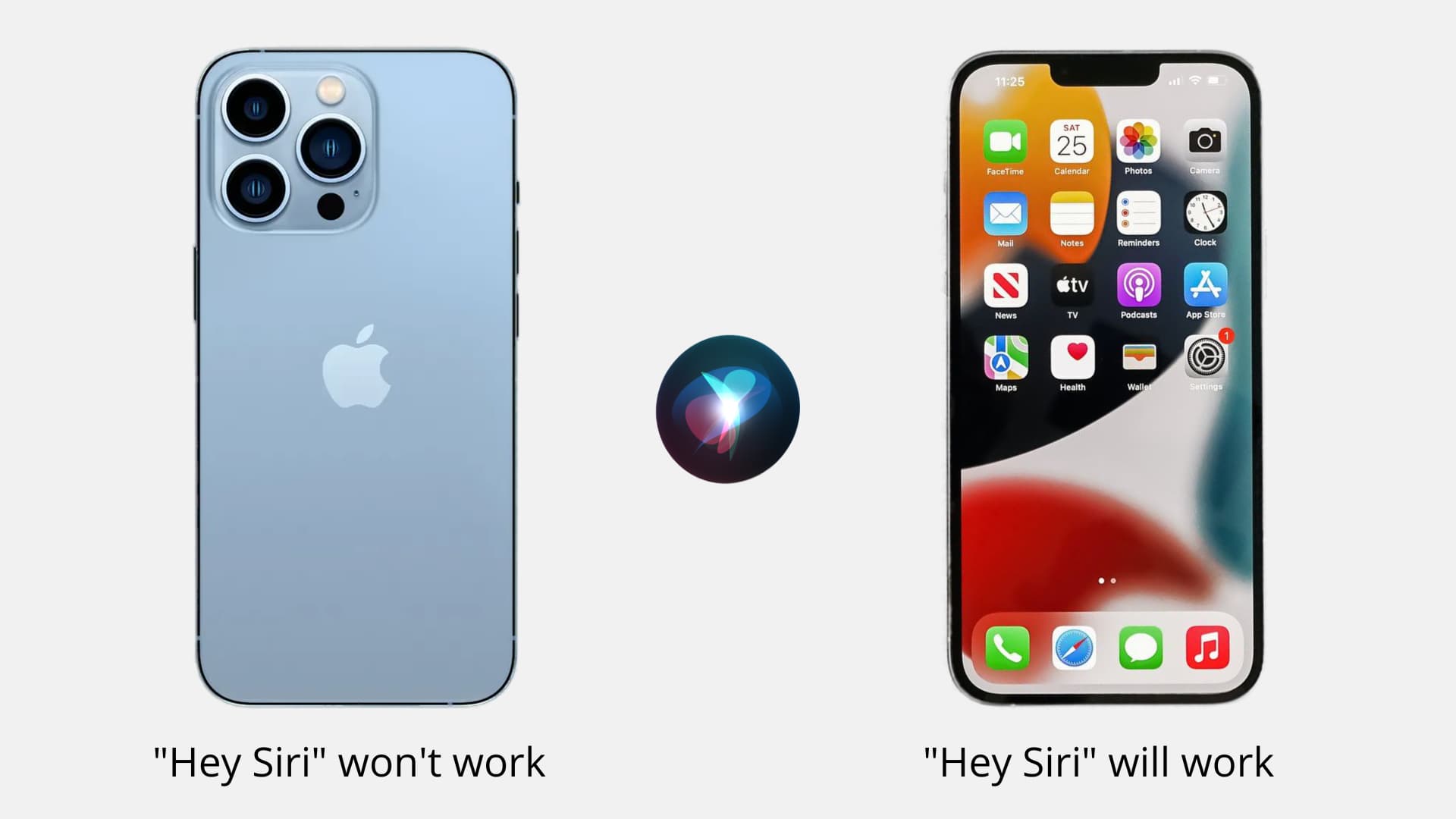 Sometimes software glitches can occur, and a restart can often fix problems with services that get stuck and fail to work. Once you have turned off your iPhone and turned it back on, “Hey Siri” should work again.

Are there multiple “Hey Siri” devices nearby?

Let us say you’re in your room with several “Hey Siri” devices. Now, when you speak “Hey Siri”, all these Siri devices instantly communicate with one another via Bluetooth to decide among themselves as to who should respond to your “Hey Siri” request. HomePod (if there) gets the preferential treatment and will respond in most cases. If HomePod isn’t there or it’s too far, any other “Hey Siri” device closest to you or one you interacted with recently will respond.

If your “Hey Siri” requests fail repeatedly, make sure Bluetooth is enabled on all your devices like iPhone, iPad, Mac, etc. Taking this small step will ensure all your “Hey Siri” devices can communicate, decide, and respond correctly to you.

Is Low Power Mode turned on?

You can’t rule out the possibility of “Hey Siri” failing to catch your commands due to software bugs. To fix this, download and install the latest version of iOS on your iPhone by going to Settings > General > Software Update.

When you set up “Hey Siri” for the first time, you’re asked to say “Hey Siri” and a few sentences a few times before the service initializes. This is because the feature requires some form of calibration before it can be used.

If “Hey Siri” never seems to be able to understand you, then it might be worth going through this calibration process once again. This is done by going to the Settings app and navigating to Siri & Search > Listen for “Hey Siri” and then disabling the already-enabled feature. After that, restart your iPhone and then turn Listen for “Hey Siri” back on. You’ll be taken through the calibration steps where you’ll have to say something. Your device will then re-learn your voice. 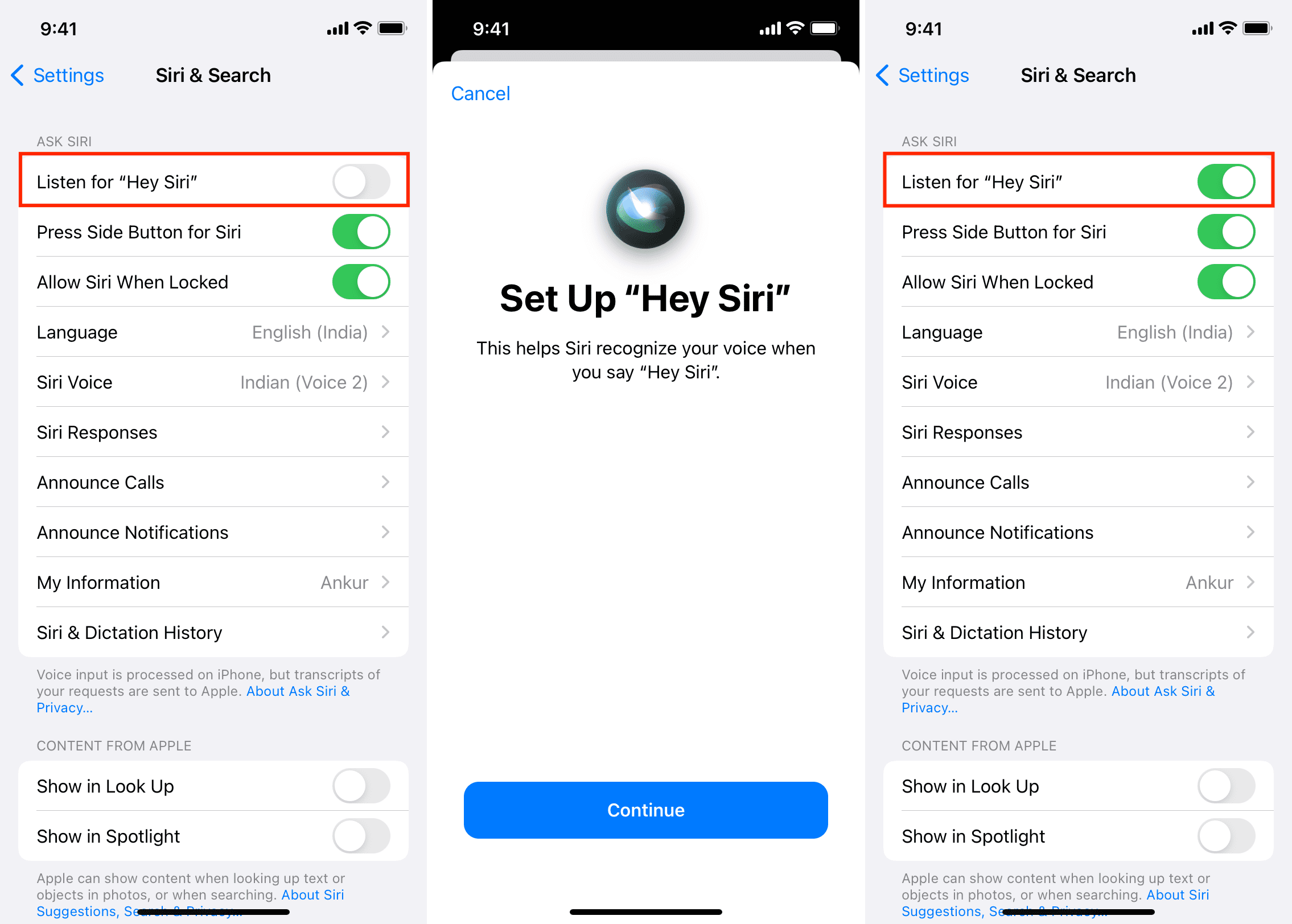 This tip may come in handy for those with heavy accents or for those that normally mumble when they use Siri but need to talk louder to get the feature to work.

Siri might not work properly if you or someone with access to your iPhone changed its language or accent to something you don’t speak. To fix this, go to Settings > Siri & Search > Language and select the appropriate one.

Some languages like Chinese, Dutch, English, French, German, Italian, and Spanish have more than one version/accent. Make sure you choose the correct one. 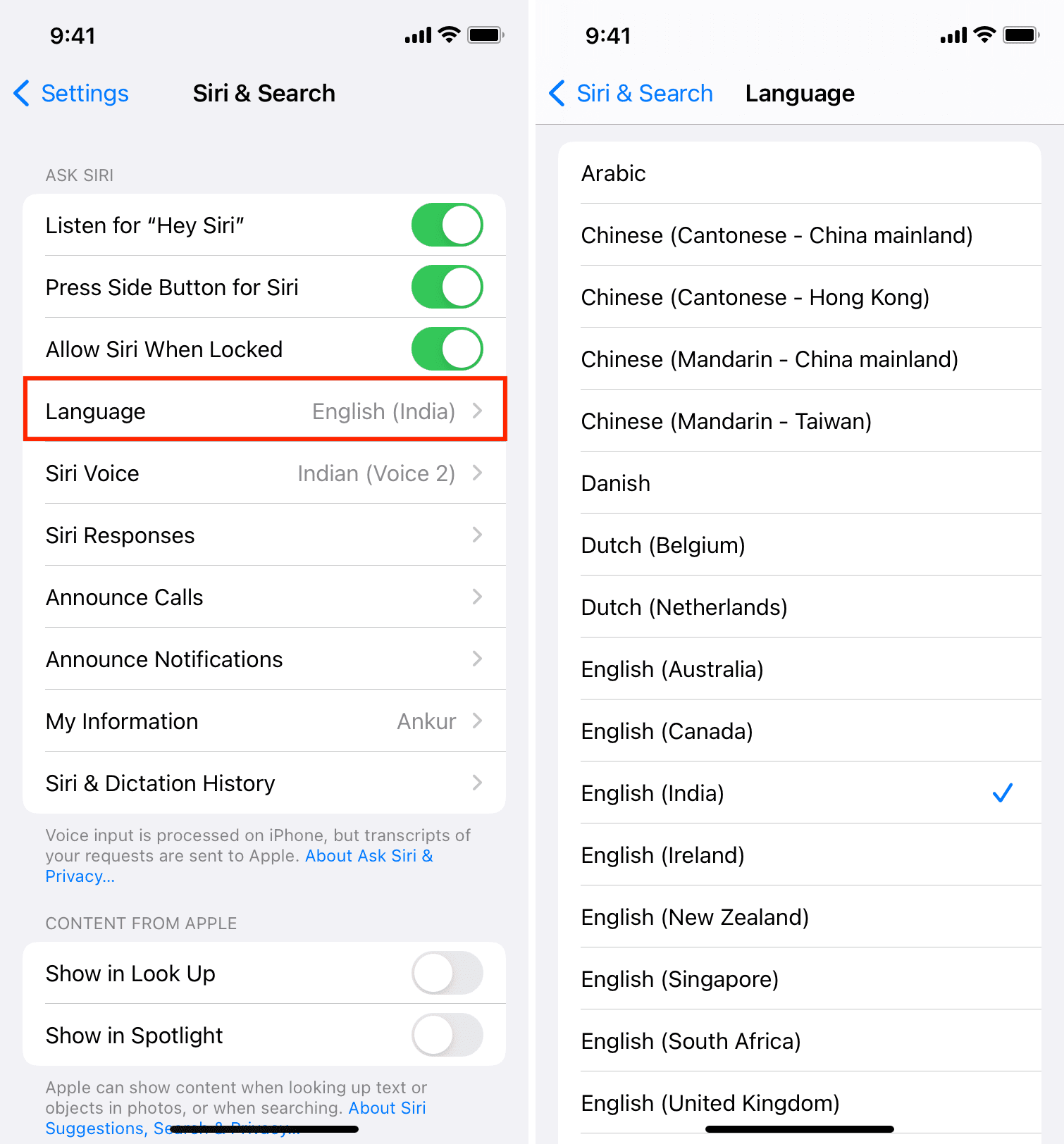 Check Siri’s availability in your country

As of now, Siri is available in about 38 countries & regions in specific languages. For example, Hindi, Bengali, and Marathi are the three most popular languages spoken in India, but Siri is only available here in English. Therefore if “Hey Siri” or Siri isn’t working in your country, visit this official link to see the Siri availability and the languages it supports.

Is your iPhone microphone working?

Another thing to look into if you’re having problems with “Hey Siri” is to check that your microphone is working. Water damage or debris inside the microphone can wreak havoc on microphone performance or keep it from working altogether.

I recently had my microphone go out on me on my iPhone, and it is hindering my ability to use any Siri and Siri Dictation features on my device.

To check if your microphone is working, enter an app where you can pull up the keyboard and attempt to use the Siri Dictation feature. If you don’t see any movement in the voice waveform, then you probably have a bad or muffled microphone.

Try removing any cases that may be covering the microphone, such as thicker and bulkier Otterbox or Lifeproof cases. You can also try to blow at the microphone to remove dust particles that might be obstructing the sound.

Are AirPods connected but not in/on your ears?

AirPods 2nd generation and later and some newer Beats earphones (owned by Apple) can respond to your “Hey Siri” requests. In case “Hey Siri” is not working on your iPhone, look around and make sure your AirPods aren’t out of their case and connected to the iPhone. If they are, put them back in the charging case or wear them. Now, “Hey Siri” should work perfectly.

Related: How to turn Siri off on AirPods 1st, 2nd, 3rd gen, and Pro

If you use wired earphones with your iPhone, sometimes the device can get stuck in headphone mode. During this, your iPhone thinks a pair of earphones are connected to it, while in reality, none are. And since it thinks earphones are connected, it will ignore using the on-device microphone and speakers, due to which your “Hey Siri” request might fail. Here are the quick ways to fix iPhone stuck in headphone mode.

Still unable to use “Hey Siri”? Go ahead and reset all iPhone settings, and this should most likely fix the problem.

If the settings reset didn’t fix it, you might still be experiencing a software problem, such as file corruption. Try restoring the device and see if this fixes the problem.

In rare cases, a reboot and reset can’t fix the issue because it’s so severe. This is especially the case with jailbroken devices, where software extensions like jailbreak tweaks can modify the Siri functionality.

If everything listed above fails, you may want to chat with Apple. A malfunctioning device may be covered under your limited or extended warranty, and Apple may resolve problems for any covered device free of cost. On the other hand, if you’re out of warranty, you may be looking at more expensive alternatives to a free replacement.

Despite how useful “Hey Siri” can be, it can be quite finicky at times. Hopefully, after following the steps above, especially after recalibration, you’ve been able to get your “Hey Siri” working as you’ve been expecting it to.