When enabled, Low Power Mode extends your iPhone’s battery life even further with up to three additional hours of run time before you need to charge your iPhone again.

Apple says Low-Power Mode “pulls switches you didn’t even know existed” and these switches basically optimize your iPhone for power efficiency by throttling down its processor and shutting down a few non-essential features like automatic downloads, fancy visual effects and more.

This tutorial covers enabling and using Low Power Mode on iOS while briefly touching upon other battery-saving tactics that iOS employs.

With Low Power Mode enabled, your iPhone temporarily reduces power consumption until you can fully charge it. This mode automatically kicks in when the battery falls below 20 percent, but you can enable it manually at any time.

As mentioned, Lower Power mode provides up to an additional three hours of battery life for the average user. This is in addition to other power-saving techniques described further below that result in another hour of run time before charging.

Keep in mind that Low Power Mode is limited to iPhones for the time being.

1) Open the Settings application on your iPhone.

2) Scroll down to and select Battery. 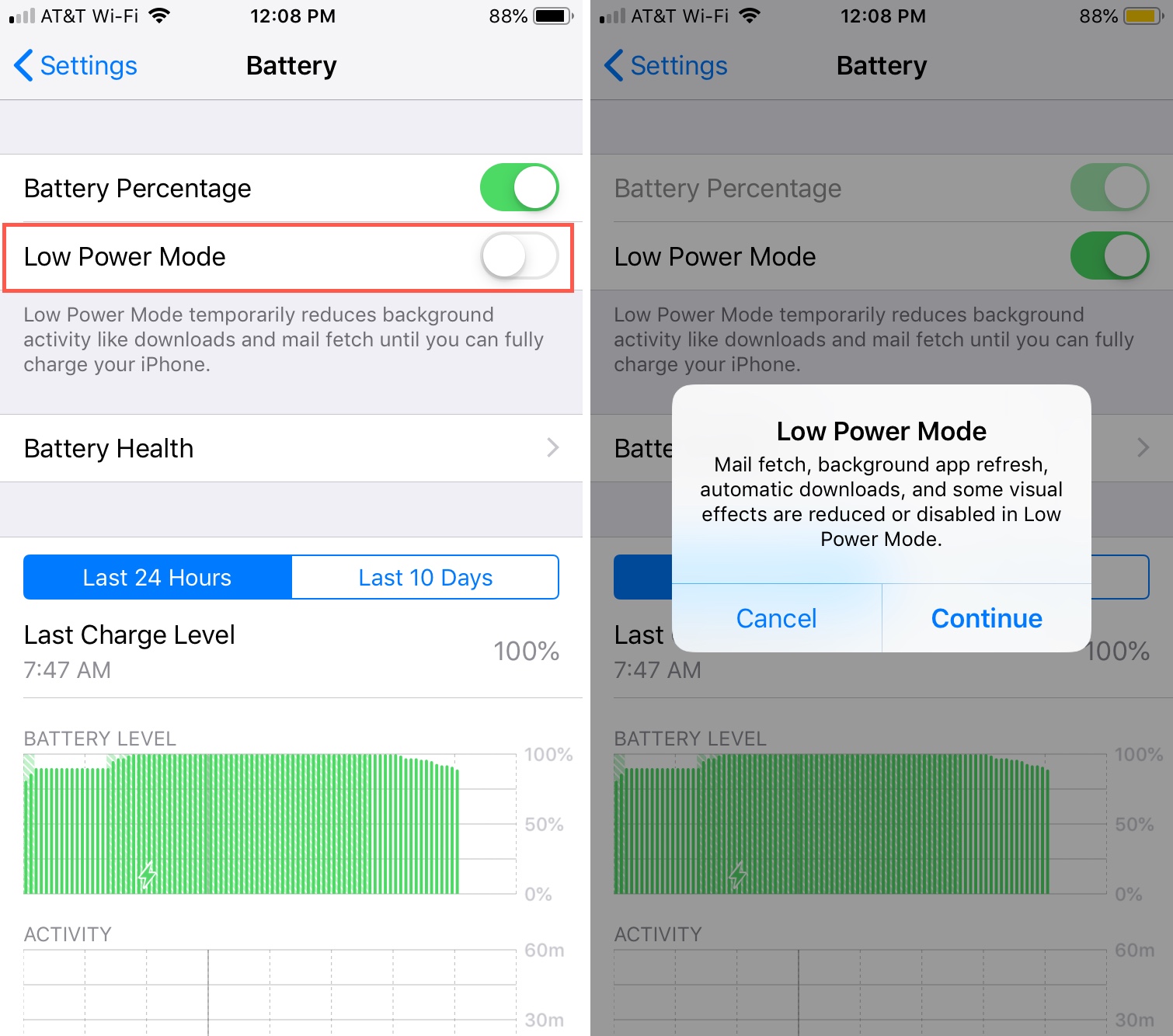 First, the battery icon in the iOS status bar turns yellow instead of the standard green and second, the battery percentage is shown at the top of the screen regardless of your preference. As mentioned before, Low Power Mode activates automatically when the battery falls below 20 percent.

The Battery section, introduced in iOS 9, also lets you sort battery-hogging apps on your phone by those using the most and the least amount of power.

Lastly, there’s a new Battery widget in the Notification Center to keep tabs of battery information for connected devices like Bluetooth headphones, other iOS devices and the Apple Watch.

In addition to Low Power Mode, iOS adopts other optimization techniques to trim battery usage wherever possible, most of which just work right out of the box.

For starters, apps and key technologies have been made more efficient across the entire operating system in order to conserve power.

My favorite is the new facedown detection feature: if your iPhone is facedown on the table, iOS will prevent the screen from turning on when a notification comes in.

Should I use Low Power Mode?

Should your iPhone run low on power and there isn’t an outlet nearby, or you don’t have the charger on you, Low Power Mode is a viable option for conserving juice.

People who are unhappy with their iPhone’s battery are definitely advised to try out Low Power Mode for a day or two to see if it works for them. But as mentioned above, the extra juice comes at a price.

If you don’t mind manually checking your email and app updates in the App Store, waiting a little longer for your favorite apps to load and not seeing fancy visual effects, than I’d say these tradeoffs are worth taking Low Power Mode for a spin.

Just don’t use it whilst playing games as Low Power Mode was discovered to throttle down the A8 processor inside the iPhone 6 by as much as forty percent, making the device comparable to the iPhone 5s in terms of sheer CPU performance.

Even if you don’t turned on Low Power Mode manually, your iPhone will still put up a prompt when you’re nearly out of juice, asking if you’d like to turn it on.

It’s worth reiterating that Low Power Mode is a completely optional feature, meaning Apple doesn’t force you into using it unless you’re OK with not having the full CPU speed available when running low on juice.

If you find this tutorial useful, please bookmark the article, share it with your friends on social media and send it to support folks. We like feedback so feel free to submit your ideas for future tutorials to tips@iDownloadBlog.com.