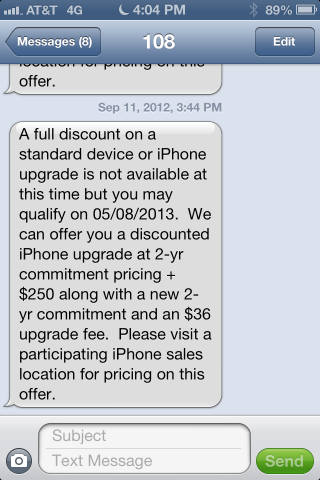 So, you want to upgrade your current phone to the iPhone 5? The first step you need to take, is to see whether or not you qualify for a fully subsidized upgrade with no penalty.

AT&T makes this process particularly easy, all you have to do is dial *NEW# (*639#), and you will receive a text message laying out your eligibility. For Verizon users, Big Red has provided a website that you can go to to verify your upgradability, or you can dial #874.

In the past, AT&T has let users who are only partially through an existing contract to upgrade without any penalties. Whether or not they plan on doing this with the iPhone 5 remains to be seen, but from what I’ve seen thus far, it’s not looking entirely promising.

The sad fact is, that if AT&T doesn’t allow folks in the middle of their contracts to upgrade for free, it might make more sense to buy the device off contract, assuming Apple will have those available on launch day.

Let’s do the math:

An off-contract base iPhone 5 will probably be about the same price as base off-contract iPhone 4S at $649. So for just $150 more, you’ll save yourself from having to lock into another two-year commitment, where the same issue could come around and bite you again. Hopefully AT&T realizes this, and allows mid-term contract users to early upgrade without penalty.

The only place where this would be an issue is if Apple doesn’t have unlocked phones on launch, which is, judging from previous launches, totally within the realm of possibilities.

For those of you who are in a similar situation, what will you do? Will you bite the bullet, and pay upwards of $500 for a new iPhone 5, will you switch providers, or will you wait it out until unlocked devices are available?