Following up on a series of product introductions from this morning, Apple is now emailing its registered developers to download the GM seed of the Xcode 4.5 developer tools and test their warez against the final iOS 6 code, which have both been released as part of today’s announcement bonanza.

The company is putting emphasis on its own mapping solution and is asking programmers to enhance their iOS apps with the new vector based engine in MapKit. Other areas of interest to developers: new camera APIs, tickets, loyalty cards, and other passes with Passbook, integrated Facebook sharing capabilities and more…

iOS 6 will soon be in the hands of hundreds of millions of customers. Take advantage of beautifully designed and smooth panning maps using the new vector based engine in MapKit.

Provide tickets, loyalty cards, and other passes with Passbook.

By “soon”, Apple is thinking September 19 (next Wednesday) when iOS 6 is due for public consumption.

In order to prep apps for submission, Apple advises developers to download the GM seeds for iOS 6 and Xcode 4.5 and test their existing apps for compatibility. 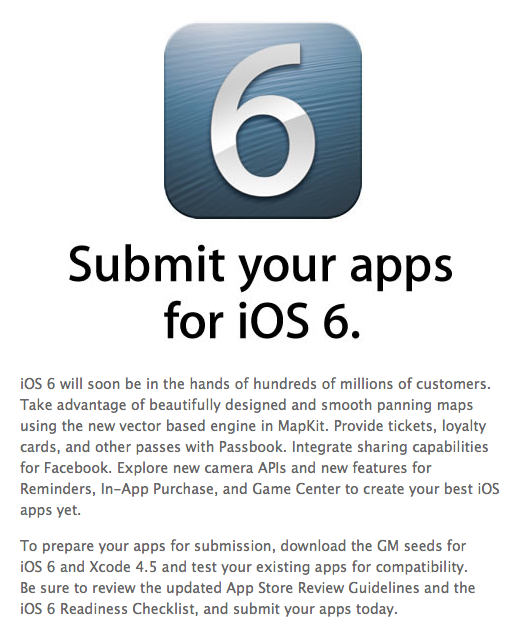 As the iPhone 5 goes on store shelves next Friday, September 21, your best bet is to download and deploy iOS 6 across all your devices immediately following its September 19 release.

Don’t wait until next Friday’s iPhone 5 launch because iTunes activation servers will probably be unresponsive.

By the way, I hope Google is reading this because its new YouTube iOS app isn’t fully ready for iOS 6 yet.

Normal behavior would be to put up a system-wide sharing sheet and let the operating system take care of posting your content to Facebook.

Are you looking forward to the new iOS 6-specific features in your apps?