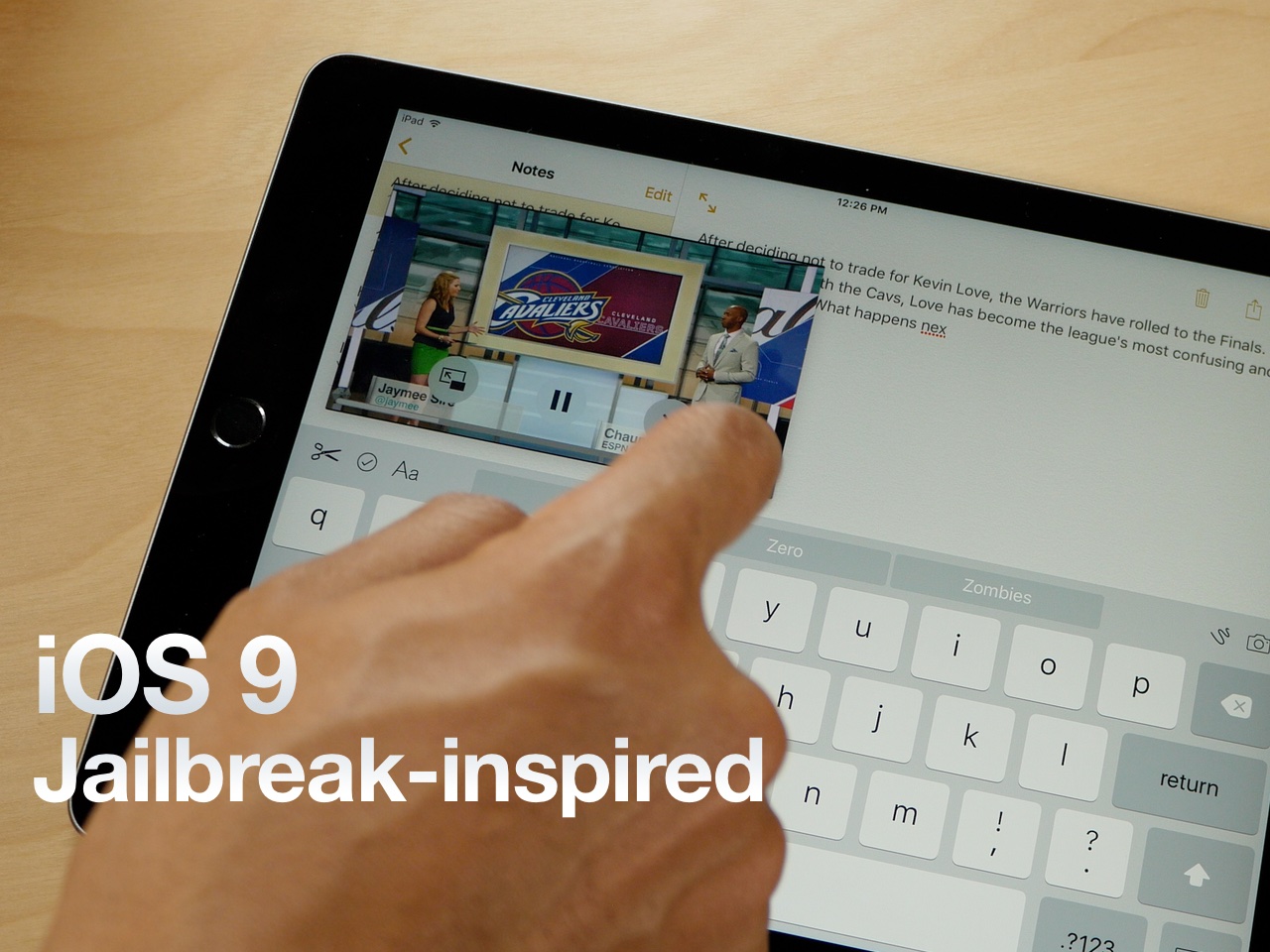 iOS 9 has brought a lot of new features to the table, and many of those features have been borrowed, whether by coincidence or not, from already existing jailbreak tweaks. In this post, I summarize some of the tweaks that have been natively added to iOS 9 beta 1. Did your favorite tweak make the cut?

In my review of SwipeSelection Pro, I called it one of the best jailbreak tweaks of all time. So it’s not totally surprising that Apple decided to adopt a similar feature in iOS 9. Here’s what I said in my SwipeSelection Pro review:

I apologize in advance to Kyle Howells, developer of SwipeSelection, but this is one of those tweaks that I wish Apple would straight-up steal; it’s just that good.

Yes, Apple’s implementation differs from that of SwipeSelection, but the basic premise remains the same, and it’s arguably better since two fingers should result in a lot less accidental swipes than SwipeSelection’s single finger gesture. We’ll have much more on this awesome new feature soon.

It’s a tweak that’s so obvious, it’s kind of weird that we’re nine iOS iterations in before it finally appeared. ShowCase was a tweak that accurately portrayed the current letter case on the keyboard key caps. Now, this feature is native in iOS 9, and it will help eliminate confusion when typing.

Ryan Petrich’s legendary VideoPane tweak allowed us to detach videos and watch them while multitasking on our jailbroken iOS devices. It was rightly listed in many top jailbreak tweak lists, and brought genuine usefulness to iPhone and iPad users everywhere.

Along with Apple’s other multitasking efforts, it now allows for similar functionality to VideoPane. Ryan’s legendary tweak was of the greatest jailbreak releases, and the ability to have true Picture in Picture mode on iPad is one of iOS 9’s greatest features as well.

Search Settings, like the aforementioned VideoPane, was created by Ryan Petrich. Now the same basic functionality is available in iOS 9. I think we’re seeing a trend here. Apple should probably hire Ryan, don’t you think?

There are several jailbreak tweaks that aim to help save battery life, but BattSaver was one of the more popular releases to do so. It did so by tempering your iPhone’s radios, which, as I understand, is what iOS 9 does with some of its new battery saving techniques, albeit to a lesser degree.

iOS 9’s new Split View multitasking feels a lot more polished, but tweaks like ReachApp showed jailbreakers what was possible with a little innovation. And since iOS 9’s Split View is currently limited to just the iPad Air 2, Reach App will still be used by many jailbreakers for lesser iPads and iPhones.

This one is a little more obscure, but I thought it should be included in the list. iOS 9’s App Switcher has been completely redesigned, and with the redesign comes rounded App Switcher cards.

It’s a continuing trend that’s been going on since the very beginning of the iPhone’s existence, and as long as jailbreaking is around, I don’t see this trend changing. What do you think about all of the jailbreak tweaks that Apple has been inspired by or possibly borrowed from? Sound off down below with your thoughts, and opinions.