This week was a bit dry for new apps and games. The iTunes Connect app store freeze will have definitely had an affect on launches. Instead of spotlighting new titles for you to check out while avoiding the in-laws, this weekend, we are bringing families together.

Today, we’ve got a list of pass-and-play iPad games that you can participate in with your family. If you are looking for a way to bond with cousin Dan, see if a bit of friendly competition (or cooperation) from the list below will turn you into gaming buddies for life. 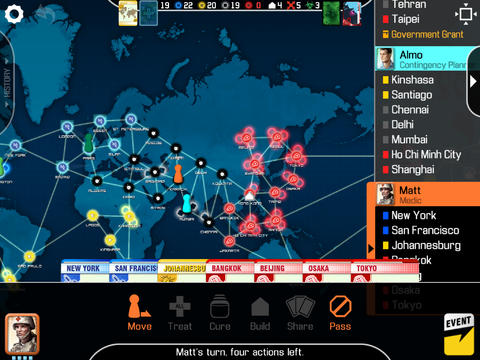 In this co-op style pass-and-play game, players must save the world from four deadly diseases that could potentially wipe out humanity. As a dispatcher, medic, researcher, scientist, or operations expert, you are on the hunt to find a cure. Each player can move from one city to the next, in order to research a disease, share information with other players that might have an advantage, treat the infection at a location, build a new research lab, and ultimately find the cure. When all four diseases have been cured, the players win. If you run out of player cards or more than seven outbreaks happen, you’ve failed humanity. This game is available on the iPad for $6.99. 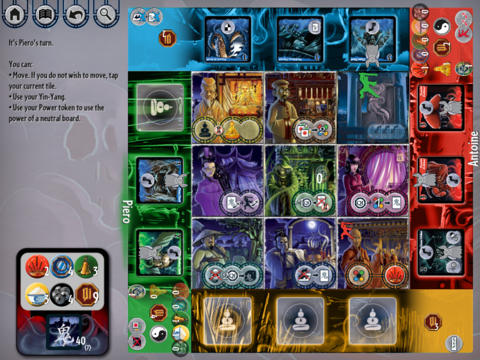 In this team-up game, up to four players must join forces to expel evil spirits called up by the Lord of Darkness. As Taoist monks, players defeat the ghosts by sheer force, or by conjuring magic. With help from villagers, you can become even more powerful against the supernatural beings. Different villagers have different abilities. Bring in the Witch to help exercise ghosts. Have the Priest pray for additional strength. Ask the Herbalist to cook up better spells. If you manage to save all of the townsfolk, you’ll still end up face to face with the Dark Lord himself. This game is available on the iPad for $5.99. 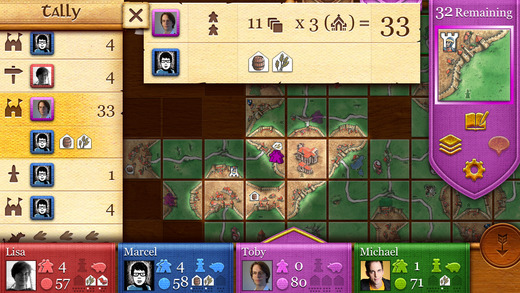 If you prefer competition over cooperation, this game gives you the chance to become the largest land owner at the expense of your opponents. As terrain tiles are placed, players attempt to gain ownership of land by placing followers. When you place followers on different features of terrain tiles, you will build cities, roads, and cloisters. Each of those features is worth a certain number of points. Each feature requires specific builds, like no unfinished edges or being surrounded by a number of terrain tiles. The game ends when all tiles have been placed. The player with the most points at the end of the game is the winner. This game is available for $9.99. 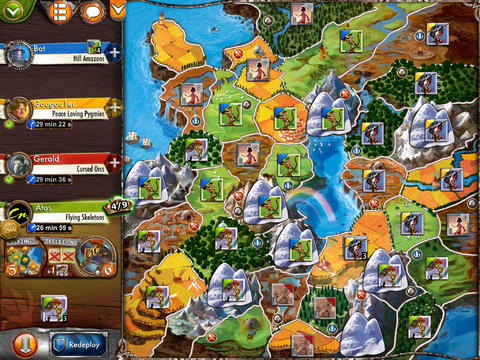 This is another me-against-the-world game of land ownership. However, instead of turning free land into cities that you control, you are already protecting a section. Players try to capture territories by using race tokens, which are generated by the particular race they control. If you have enough tokens to take the land, you’ll spread your race throughout the world. However, if the territory is fortified and you just can’t spare any more race tokens, you may lose if you don’t call in extra help with the reinforcement die. The game ends after a certain number of rounds (determined by the number of players). The player with the most territories at the end of the game wins. This game is on sale on the iPad for $2.99. 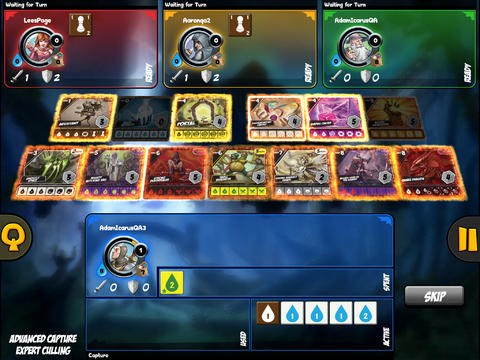 In this dice-building game, players fight opponents just like they would with a card deck, but with six-sided dice instead. Being the owner of the physical board game, as well as the iPad version, I can say that the digital game is much better at keeping your dice from getting lost. In this game, players summon creatures by rolling dice. Your dice roll determines what you can summon. Then, you’ll attack your opponent with those creatures. Your opponent has a chance to defend from your attack using the dice in his “hand.” The player with the highest roll, which includes the stats of the summoned creatures and any additional spells, wins the round and a Glory Point. Dice are also used to purchase new creatures and spells that can be used in future battle rounds. The player that earns enough Glory wins. This game is available on the iPad for $3.99. 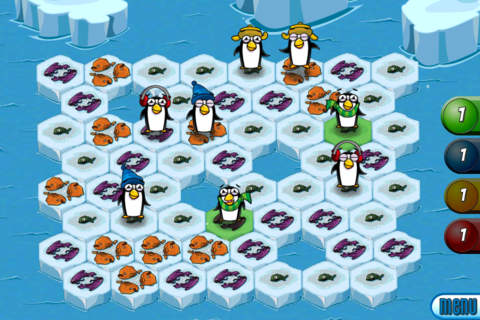 This game is perfect for families with little ones. Although its rules are simple, it is still fun enough to be enjoyed by grown-ups, too. The playfield is made up of a bunch of hexagon tiles, each with at least one fish on it. Players control a group of penguins that are trying to grab all the fish. Every time you move, the tile you just left becomes a hole in the ice. Your penguin gets the fish that were on the tile that dropped, so it is smart to land on a tile with as many fish on it as possible. As the game progresses, it becomes more and more difficult to move around, since there are so many holes in the ice. Eventually, you’ll run out of tiles to move to and your penguin will be eaten by a whale. The player with the most penguins at the end of the game wins. This game is on sale for $0.99. 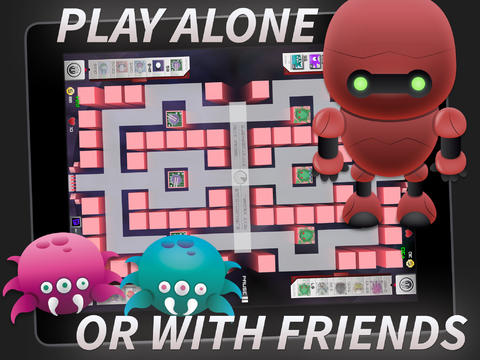 If you aren’t particularly interested in board game ports, this multiplayer tower defense title might be more up your alley. Players compete, head-to-head against each other by placing as many bug like turrets along their own pathway. At the same time, you’ll be sending your soldiers out to try to make it through your enemy’s path. Players automatically generate income, called “Stratocoins” every 10 seconds. The more units you send out, the higher your Stratocoin income becomes. This money is used to buy or upgrade towers. The first player to successfully get 10 units through to the opponent’s gate wins. This game is available on the iPad for $1.99.