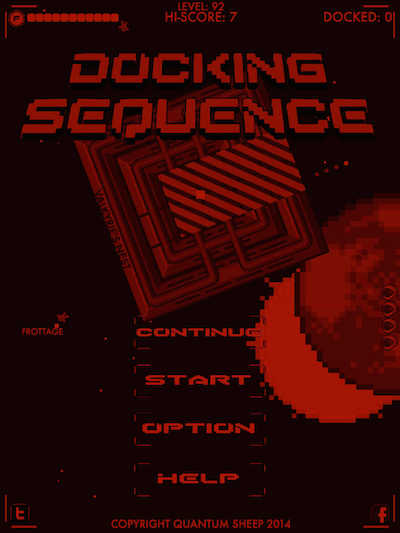 There are loads of simulation games out there. You can take flight in complex military plane cockpits, ride the rails as a train conductor, and even build an entire city as mayor. How about a docking simulation game that takes place in outer space?

Docking Sequence is such a game. Players navigate a shuttlecraft through treacherous environments in an attempt to safely land on a space station. Think Gravity mixed with Interstellar, only in 8-bit.

Players are in control of a space shuttle with one goal; land it. In the center of the screen sits a square space station with a landing strip. By swiping in the direction of the landing platform, players move the shuttle into position. As easy as that may sound, things get a lot trickier when the station is surrounded by an asteroid field or is being attacked by alien ships. 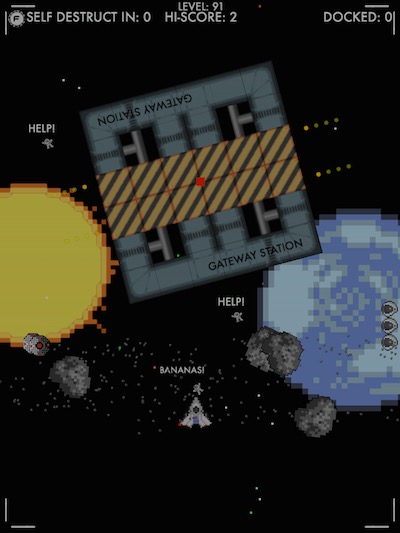 Once your shuttle appears on screen, swipe up, down, left, right, or diagonally to approach the landing platform. Your shuttle will zoom in that direction. Tap the screen to stop the ship from moving. This will help you avoid going too far. The speed of your movement is dependent on how hard you swipe.

You can try to rescue floating astronauts before landing. On some levels, the tiny star-like astronauts will zoom by yelling for help. If you time your approach right, you’ll cross their path on your way to the space station.

Don’t go chasing after astronauts, though. Your ship has a limited supply of fuel, which you use up every time you swipe to move or tap to stop. When you run out, you’ll only have five seconds to get to the station and dock. 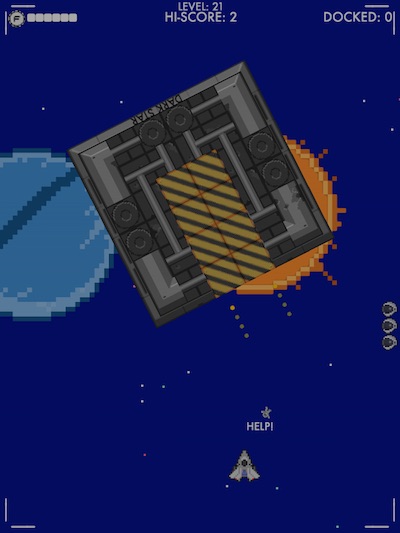 As the game progresses, obstacles are added to the atmosphere to make docking harder. For example, the space station will start to spin, making it harder for you to reach the landing platform. You’ll be dropped into environments where asteroids surround the station so you can’t just zoom right onto the landing pad. You may even find yourself under attack as you try to get safely to the dock.

There are 100 different space station configurations and 10 different systems to dock with. You can unlock 10 different shuttle styles and reveal secret color schemes by landing with excess fuel.

Docking Sequence is available on the iPhone, iPad, and iPod touch for $0.99. Download it in the App Store today.

What do you think of this retro-inspired space simulation? Let us know in the comments below.