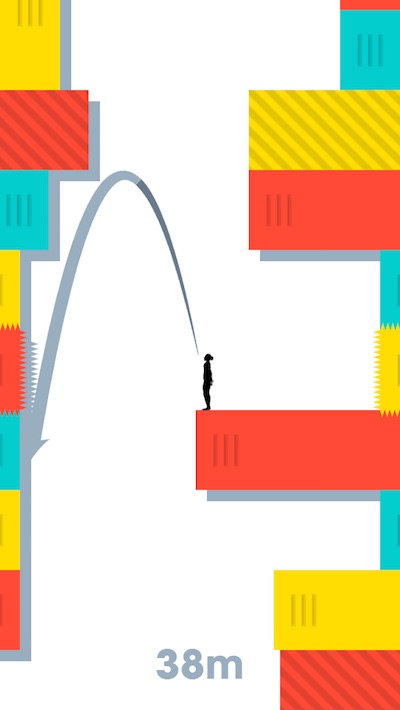 I love it when a completely new type of game comes out. It’s not that often that we, as game reviewers, get to play around with something that has not yet been done to death in one form or another, even in our most favorite genres.

Stair: Slide the Blocks to Ascend is different than most types of games I’ve played, yet its simplicity makes it so easy to get engrossed in that it seems like I’d been playing it for years. It is technically an endless jumper, but not like Knightmare Tower or Ninja Up. We’ve got a hands-on game review of Stair for your reading enjoyment today.

There is only one screen that moves vertically. The background is white and the sides are populated with orange, blue, and yellow bars, or “sliders” as they are called in the game. Each slider has three lines on one side, signifying that it is the side you are supposed to slide from. Touch and drag that end to pull the slider out.

There is also one female jumper, shadowed in black. The jumper will hop from one side of the screen to the other and it is your job to pull out a slider so she doesn’t fall into the abyss.

When the jumper is ready, an arched arrow will appear. This gives you an idea of how high she will jump and where she will land so you know which slider is the best to pull out and progress the highest.

The goal is to get as high as possible. As easy as you may think that is, there are plenty of obstacles along the way to make it difficult. 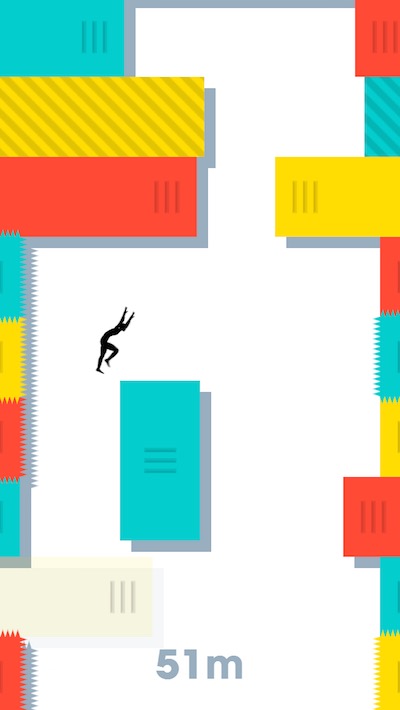 Players start by moving one of the sliders. This will activate the jumper who will hop to the first slider she can reach. Then, she will prepare for the second jump on the opposite side of the screen. Pull out the next slider that she can reach. You must do this quickly as you only have about one second before she jumps.

The higher you go, the more things start to get in the way. Some sliders will already be pulled out and if the jumper hits one she will fall. So, you’ll have to be pushing sliders in so the jumper doesn’t hit her head, while pulling others out for her to land on.

That’s not all. There are some sliders that move up and down instead of in and out. These are much wider and more difficult to reach. Since they can’t be pulled out, you may not be able to use them if your jumper can’t get far enough across the screen.

You’ll also come across spiked sliders. These are dangerous on all sides. Slide them completely out of the way whenever you can so that your jumper doesn’t accidentally land on one.

It just keeps going. I’ve actually only made it 65mm, so I have no clue what other obstacles are waiting for me up higher, but I can’t wait to find out. 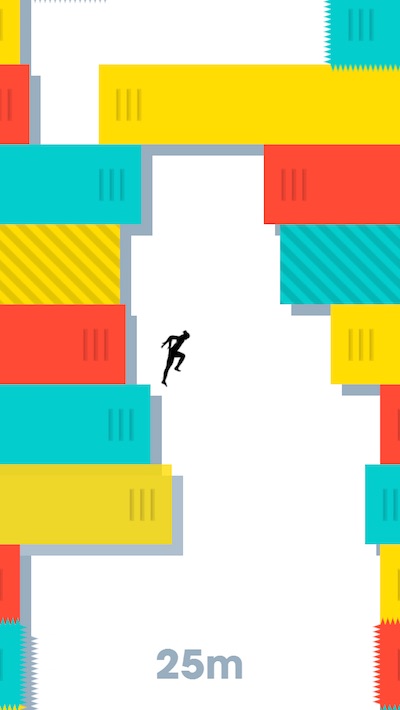 This game is very unique. You’re not just flinging or bouncing your character to greater heights. Instead, she jumps on her own and your job is to keep her from falling by pulling out platforms for her to land on.

I love the smooth animation of the jumper. She looks like a gymnast. When she smashes against a slider, it almost seems like she really got hurt. She will also scale up the side of a slider if she lands right on the edge, which gives it a nice realistic touch.

A series of tips appear between each try. If you make it higher than 25mm, no tip will appear. Unfortunately, that isn’t permanent. If you reach 25mm in one try, but not in the very next one, the tips reappear again. I would love to be able to turn these off.

Stair costs $1.99. I think that is a good price for this game. It has that addictive quality that makes you want to play one more time to get a little bit higher, but isn’t so frustrating that you give up. The replay value is extremely high since the goal is to get as high as you can. The obstacles randomly position each new try, so you’ll never see the same set up twice.

I love this game. It is definitely going to be in my games folder for a long while. If you find endless jumpers to be worth your time, you will really dig this. You don’t have to be a fan of the genre, though. Fans of fast-paced reaction timing games will find enjoyment here, as well. This game is available on the iPhone, iPad and iPod touch. Download it in the App Store today.

As noted above, this is different than other endless jumper games, but it has similar game mechanics to Avoid It.

What do you think of Stairs? Let us know in the comments below.