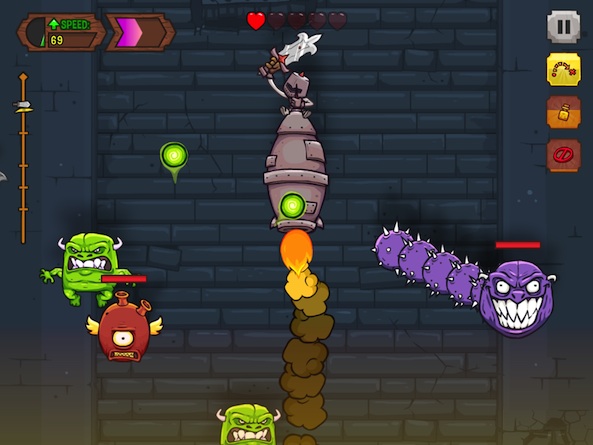 Temple Run defined a genre with its 3-D view endless runner gameplay. What made it stand out from others was the high quality of design and development that went into every detail of the app.

Knightmare Tower is setting the standard for the vertical version of the endless runner genre with a game that is clever, exciting, and impossible to put down…

The game is full of bright colors and entertaining music. The graphics are cartoony, but not cutesy (although those spiky bats are pretty adorable). The background is colorful and changes with each new height you reach. The soundtrack is perfectly matched for the intensity of the game. It almost sounds like you are watching the action scenes in ET: The Extra Terrestrial.

The controls are based on tilt and tap. Players move the fighting knight around by tilting their device to the left and right. To attack an enemy underfoot, tap the screen and you’ll drop down onto their heads with the slash of your sword.

As you travel up to the tallest reaches of the tower, you will complete achievements, like “Split apart 25 monsters,” or “Survive for 25 seconds without dashing.” 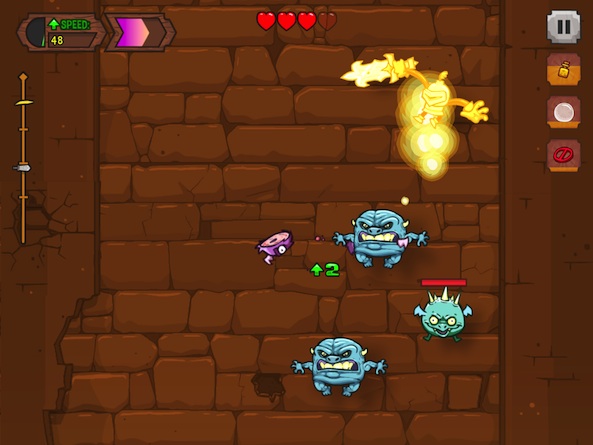 When you take off from your rocket for the first time, pay attention to the launch meter on the right. When it reaches the brightest red section at the very top, tap the screen to take off. If you hit a perfect launch, you’ll go higher.

You’ll want to go as high as possible because, eventually, the lava will catch up to you. The faster you go, the less likely it is that the lava will invade your territory.

The knight only sits atop the rocket for a very short period of time. Then, it is your job to keep him in the air by splitting monsters in two. The monsters float by horizontally and you can aim below by tilting your device. When you are directly above your enemy, tap the screen to attack.

If you miss your attack, you will fall, but you won’t die. Your trusty rocket is just out of view below and will help you travel back up. You will never suffer consequences of falling. However, falling does slow you down and the lava gets closer.

When you attack multiple monsters without missing, you will generate combo points that will end up triggering your dash. Dashing gets you a few extra meters above the lava that is quickly rising to your location.

As you travel upward, the enemies get stronger and weirder. Giant, prickly worms smile menacingly at you. Green monsters that look like they are passing gas float by. Angry, adorable bats start pushing spikes out of the tops of their heads.

When you break through a wooden floor, you are in the room of a kidnapped princess. Rescuing princesses yield great rewards. There are 10 princesses, each with a different bonus that is unlocked when you save them.

Between each game, you can buy upgrades to your weapons, armor, speed and rocket launch with the coins you’ve collected during your vertical runs. You can also upgrade bonuses, like increased luck, improved attack speed, better speed boost, and less loss of speed when falling. The potion section is expensive, but it unlocks new potions that will help you in the game. For example, the Haste potion boosts your attack speed and Harden makes you invulnerable.

The more equipped you are in battle, the better your chances are to reach the next princess and unlock new bonuses. There is also a boss to fight at the very end of the game. However, I have not made it far enough to battle the ultimate foe. I’m about halfway there right now. 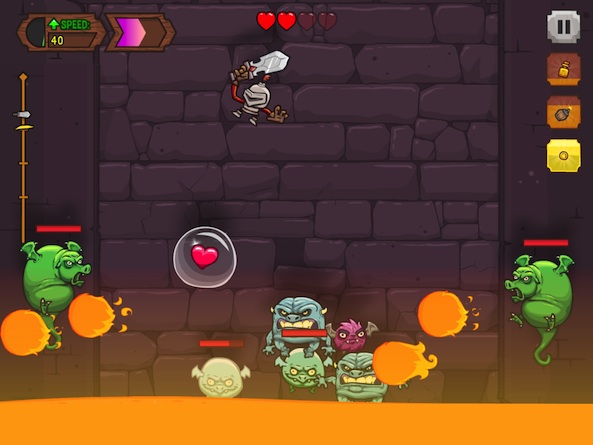 This game is loads of fun. It has an ultra high replay value because each time you launch into the air, the enemy attack is different. As you upgrade your knight, it makes more things possible. Reaching the next princess is like finding an uneaten candy bar in the refrigerator.

The game currently is not supported on the third and fourth-generation iPod touch, or the iPhone 3GS. This game is not advanced enough to need the higher power of the more current devices.

Knightmare Tower costs $2.99. In my opinion, that is too expensive. The game is comparable to endless runners like Temple Run and Agent Dash, which are $0.99 and free respectively. That being said, there are no in-app purchases in this game, so you won’t ever end up spending more money than you planned.

This game would be better suited at $1.99. But think of it this way, the development company, Juicy Beast, is a team of only four people. So, that extra dollar is going toward an independent development company who is just trying to put food on the table.

If you like endless runner games, this is a great new addition to the genre. While it follows many of the traditional gameplay themes, like unlocking items and upgrading your runner, it is unique in some ways because most endless runners don’t focus on attacking enemies in order to keep moving. Even though it is a pricey game for the genre, it is worth the price for its exciting and fun gameplay. This app is available for the iPhone and iPad. Download it in the App Store today.

Verticus is one of my favorites vertical endless runner games. Sonic Jump sends you upward, but focuses on the bounce more than anything else.

Do you have a favorite endless runner or vertical runner game? Let us know in the comments below.