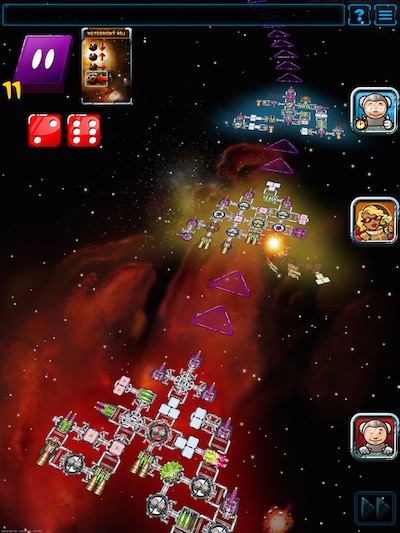 A few months ago, Galaxy Trucker launched in the App Store exclusively on the iPad. Fans of the original board game were subject to tablet playing, or not playing at all. Luckily, the game’s developer realized that iPhone owners are board game players too and reacted accordingly.

Galaxy Trucker Pocket is the iPhone version of the popular space ship building card game. Players connect different cards to their ship’s engine in order to build the most epic space racer in the galaxy. If you don’t place cards in ideal locations, you may see your ship crumble to pieces. 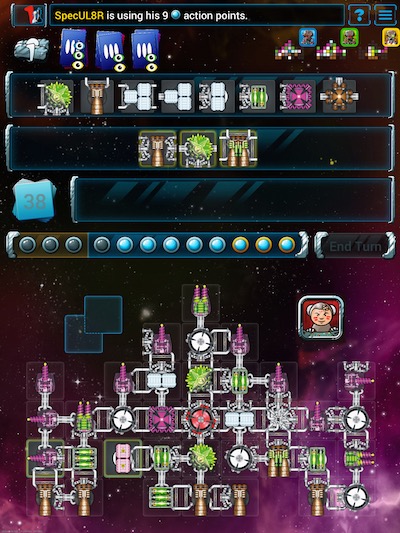 Players start by building a ship. Instead of selecting parts from a supply store, you pull parts from a giant pile of cards. Grab a card and drag it to your ship’s engine. It will “flip over” to reveal the type of part it is. Attach it to your engine or toss it back into the pile. You aren’t forced to build a ship out of random parts. You can grab a new card if you don’t like the one you’ve got.

However, if you place a card and then grab a new one, the first card will be “welded” to the ship and you can’t remove it. So, make sure you’ve placed all parts in the correct location.

There are connectors, weapons, crew cabins, additional engines, and more. Each component must be placed in an ideal location. For example, a weapon can’t have any part welded in front of it. So, placing it at the very front of the ship is perfect. If you pick up an additional engine, you don’t want to lock it to one side or your entire ship will take off in a circle. 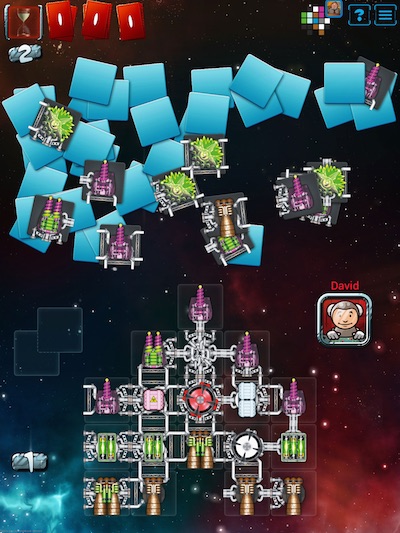 When you’ve completed your ship, it’s time to head out on the road (or the intergalactic highway). Players must get their ship to the final destination to deliver cargo and earn cash. The player with the most money at the end of the game wins. However, there are additional ways to earn money. In each route, you can collect different types of adventure cards that will earn extra cash.

Unfortunately, taking on an adventure will also put you behind in the pack. The first ship on any haul gets the first chance to accept an adventure. If your ship is too slow and never makes it to the front of the pack, you’ll never get to pick up an adventure.

Adventures also have perils. So being in the front of the pack isn’t necessarily the best place to be all of the time. For example, if the adventure card reveals a meteor swarm, you’ll have to shoot them into oblivion in order to avoid a collision.

After completing all of the adventure cards, players tally their total income based on cargo, prizes, and loot from abandoned ships. You’ll lose money for any parts that were lost during dangerous adventures. The player with the most money at the end of the route wins.

Galaxy Trucker Pocket is available for the iPhone for $2.99. Download it in the App Store today.

What do you think of this pocket-sized board game? Are you happy it is finally available on the iPhone?