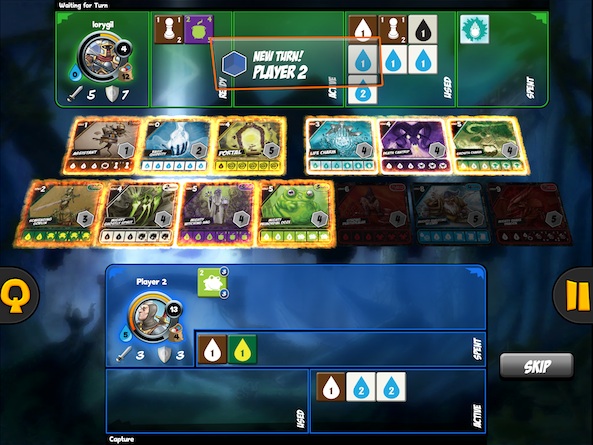 Fans of board games will likely already know the term “deck building.” However, the “dice building” genre is not as familiar to gamers. There are only a handful of titles available that feature every board game player’s secret love: dice.

Quarriors! is a dice building game (possibly the first ever) that has just launched in the App Store for the iPad. You don’t get to shake a nice, fat sack of dice while playing, but you do get to satisfy your love of the game of chance…

In the original game, series of cards are placed onto the center of the table. Each player has his or her own card and dice layout. A player mat helps determine where everything goes.

The app is very similar, except you don’t have to set anything up. The cards are laid out automatically, and your dice pool and all usable sections are displayed for you. Whenever you perform an action, the dice and cards are relocated to their new spot automatically.

The center of the screen shows the three sections of cards. The first section includes the basic cards. The second shows the spell cards. The third includes the creatures. Tap a card to see it close up, view its stats, and read its special ability. You can also double tap any dice to see the card associated with it on the board.

In your player area, you will see a profile icon that shows your attack total, defense, total “Quiddity,” number of dice in the bag, and Glory total. As you virtually roll, activate, and spend dice, they will move to different sections of your player area. For example, after you roll six dice, the results will be displayed in the “Active” section. When you cast a spell or use an immediate action, the dice used will be moved to the “Spent” section. After your turn is over, your dice move to the “Used” section.

The game also includes a Glory tracker. This is a means to keep track of how much Glory each player has. The first person to get to the designated max number of Glory wins the game. 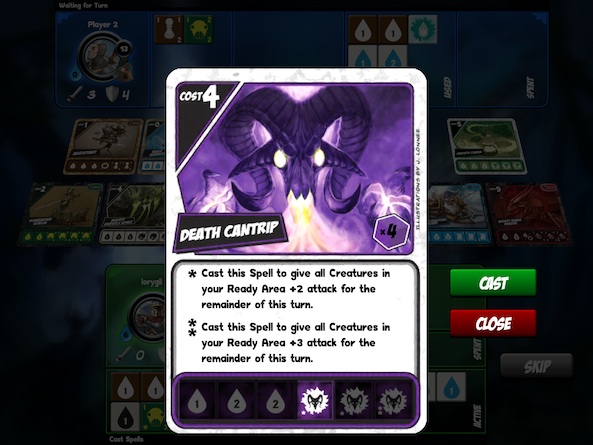 I have never played a dice building game before, so I entered this with no preconceived notion of what it plays like in real life. There is a quick tutorial at the beginning of the game that shows you where all of your controls are and how to perform certain actions, like culling the dice, defending an attack, capturing a creature from the Wilds, or casting a spell.

After the basic tutorial, you are on your own. There is no in-depth instruction manual of how to play the game or what the rules are. I had to download a PDF of the rulebook for the physical game from WizKid Game’s website.

I’m still figuring it all out, but from what I can tell, players use dice to purchase cards with creatures and spells on them. When it is your turn, the game automatically draws and rolls six dice for you. Then, if there are any immediate abilities to use, those dice will glow. Tap on a glowing dice to perform the immediate ability. For example, one ability lets you reroll the active dice, plus one more.

Then, players summon any available creatures based on the dice roll results. Creatures are used to attack opponents and defend from attack. During your turn, your creatures will attack. The opponent tries to defend by placing their own dice in the battle area. The player with the highest attack total (combining all summoned creatures and spells) wins the round and the defending creature is destroyed.

In the next round, players capture Quarry or dice. When you roll dice, you will either produce creatures, spells, or Quiddity. Quiddity is used to purchase more creatures and spells. For example, if you have five Quiddity from your original roll of six dice, those are used to let you capture a creature or spell that costs five or less.

At this point, it is the end of your turn. However, your Quarry points are not yet scored. After your opponents turns, the game automatically figures out how many Quarry you have earned for the round. Quarry is earned for summoning and defending creatures. The amount of Glory each creature earns is displayed in the upper right corner of the card. So, if during your turn, you summon a Scavenging Goblin worth two Glory and you manage to successfully defend it from being destroyed by your opponents until your next turn, you will receive two Glory points. The Glory Tracker will automatically move your player marker that number of points on the board.

Depending on how many people are playing, the game ends when the first person reaches the goal number of Glory. For example, a game of two people needs 20 Glory, while a game with four only needs 12. 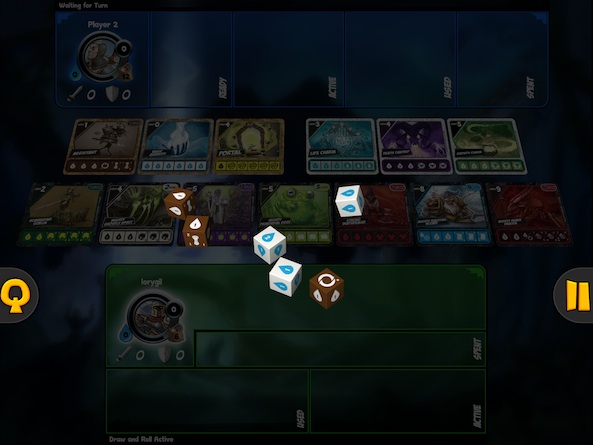 The points are all tallied for you, making it very easy to keep track of who has earned points. Plus, all of your dice are placed in their appropriate positions and any available actions will be highlighted with a glow for you. This makes it very easy for beginners to know what action to take next.

Because the app does not include detailed instructions on how to play the game, I was completely lost during my first attempt. I even won the game, but didn’t know how. The in-game tutorial includes basic rules, but doesn’t explain the details. For example, I didn’t understand what a Quidditty was, or why culling dice would help or hurt my chances. This game desperately needs the full seven-page rulebook for people who have never played a dice building game before.

Quarriors! is available for $3.99. Considering the average price of a board game app is about $5.99, this is a great bargain. It is a virtual version of the entire game, complete with 130 Quarry Dice, 53 Power Cards, a Glory Tracker, dice bags, markers, and even player area mats. Not a bad price considering the physical game costs $29.99.

If you are a fan of dice building games, you probably already own Warriors! You will be able to play this digital version with a computer-generated opponent, or with others in the room as a pass-and-play-game. Plus, you can connect with friends or strangers through Game Center for anytime/anywhere action. If you have never played a dice building game before, this is an inexpensive way to get into the genre. Just be sure to download the rulebook to help you understand how to play. This game is available for the iPad. Download it in the App Store today.

Since this is the first dice building game in the App Store, there is nothing like it. However, the game developer also has a deck building game based on Pacific Rim. If you want a game with dice, try Ravensburger’s Las Vegas.