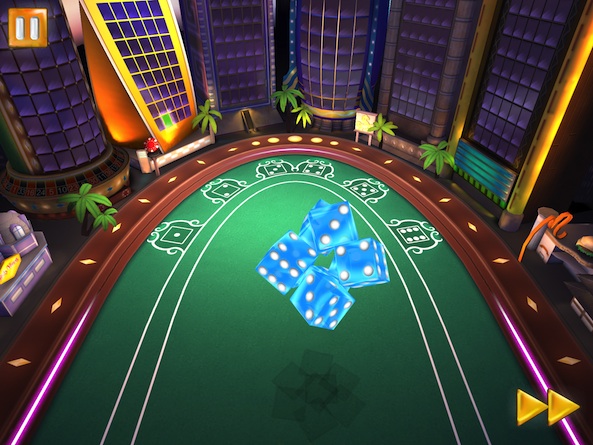 If you’ve been paying attention to my longwinded reviews, you’ll know that I am a board game fan. Put some squares on a thick piece of cardboard and throw down some dice and you’ll have me on your porch with a 2-liter of Mountain Dew and some red vines in a matter of minutes.

Ravensburger has been around for more than 100 years and makes some top quality games. Las Vegas! first launched in 2012 and just recently found its way into the App Store. Interestingly, the iOS version of this game is actually better than the physical board game…

Just like Las Vegas, this game is all glamour and glitz. The colors are bright and there are lots of blinking, glowing, and sparkling things. However, unlike Las Vegas, you won’t lose your vacation fund in one evening if you gamble all night. There are also no white tigers or “ladies of the night.”

Players compete either online against real opponents, locally in pass-and-play style, or solo against computer-generated opponents. CG opponents can be selected for their difficulty level from easy to hard.

The board consists of a game table, complete with green felt and designated areas for the numbers, six towering casinos that players compete for winnings from, and multi-colored dice so that each player is represented by a different hue.

The graphics are amazing. Almost everything in the game is stationary, but the dice can be shook and released by touching them and then dragging your finger across the screen until you want to let go. If you just tap the dice, they will roll subtly. If you toss them in the air, they will bounce around for a few seconds before settling down.

In online multiplayer mode, you must wait for your opponent to take his turn before you can move on, which can be frustrating if the other player isn’t paying attention. In solo mode, you can actually fast-forward through the CG player’s turns so that you don’t have to sit around waiting for them to move.

The audio features jazzy tunes that play quietly in the background so that you can play dice and drink your White Russian without too many distractions. When dice are placed in one of the casinos, the building “activates” and features a small animation. 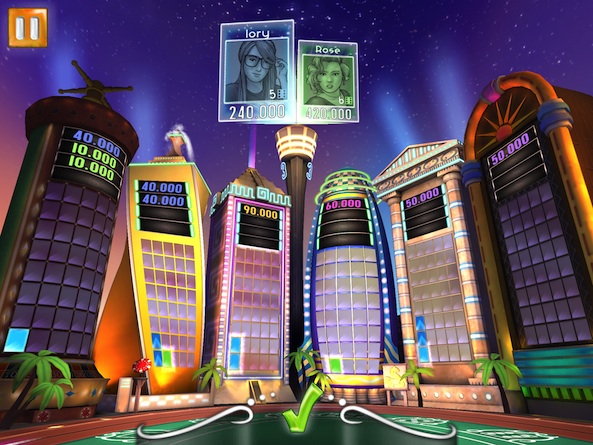 Start by choosing your avatar. You can be a punky young woman, a cigar-smoking mobster, a blue-collar worker, or one of about a dozen other characters. If you are playing with friends in a pass-and-play game, have each person choose their character. If you are playing solo, pick your computer-generated opponents by selecting from their skill level of easy, medium, or hard.

When you are ready to start the game, each casino will be stacked with a randomly generated amount of money. Some casinos will only have one winning sum, while others may have two or three different winning sums. If there is only one, the player with the most dice in that casino wins. If there are two sums, then the winnings are divided out by each player’s standings in the casino.

When you roll the dice, the resulting numbers will be placed in the casino that represents that number. There are six casinos and you start with eight dice. So, if you roll a 2, 3, two 6s, two 4s, and two 1s, those dice will go to the corresponding casinos. You will then choose which casino you want the dice to stay in. All others will go back to your hand.

The goal is to have the most winnings across the most casinos. Don’t put too many dice into any single spot because your opponent might win more money by spreading their dice across all six casinos.

In this game of chance, strategy is surprisingly important. You can’t just put your dice anywhere. To win, you must outwit your opponent by filling as many casinos with dice as possible. You’ll also have to play more dice in each casino than your opponent, so keep that in mind.

My strategy was to try to tie the dice count in each casino. If there is a tie on a casino, then no one wins the money. That leaves only a couple of casinos for all players to compete for. Which makes it easier to come out on top. 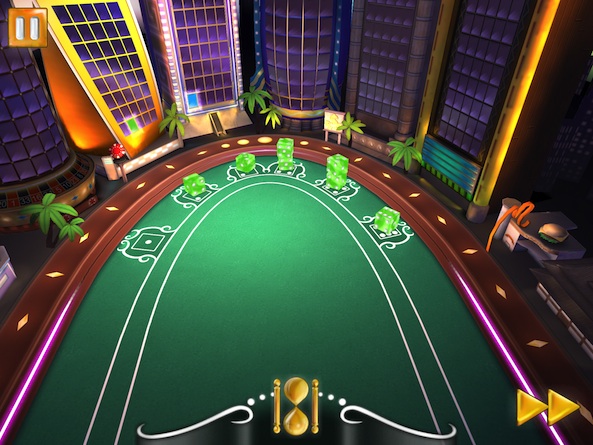 The game looks great and plays smooth. You can choose from two to four players for each tournament. If you play solo, you can speed up the CG opponents’ turns so you don’t have to wait so long to play again. If you play online, you can be paired up with as many as three additional players for a true multiplayer experience.

Online multiplayer mode is a bit dodgy. It took about five minutes to connect me with a player. Once I was connected, my game froze up and I had to close the app and restart it. The app froze two more times while I was trying to access the online multiplayer game. However, after that, there were no issues and I received an alert when my opponent had taken a turn.

For an unbelievably low price of only $2.99, you will enjoy hours of gambling either alone, or with real opponents. Board game apps usually cost about five bucks, so this is a great price. Plus, the physical board game is $35, so you are getting a game that comes with its own players for a fraction of the price.

This app is actually easier to play than the physical board game. It is part strategy and part luck. Gamers who like gambling will appreciate the dice rolling aspect. You don’t have to be a board game fan to enjoy this game. Las Vegas! is available for the iPhone, iPad, and iPod touch. Download it in the App Store today.