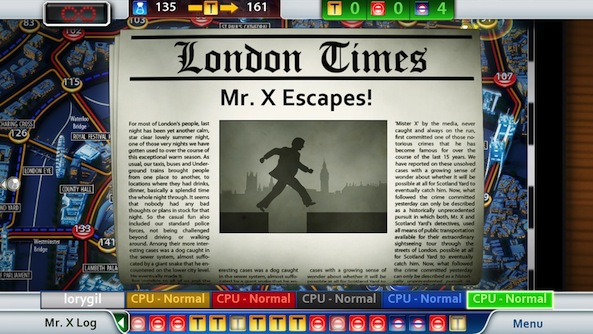 Scotland Yard is a cops-and-robbers style evasion game that is a digital replica of the 1980s board game of the same name. Players take turns trying to figure out where the elusive “Mister X” is hiding out by tracking his possible whereabouts based on his movement abilities. If you can’t find him after 22 moves, then he has successfully outwitted his opponents. If you choose to play as Mister X, your only goal is to stay hidden until the cops give up.

The Scotland Yard app has been a popular board game app for iOS since its launch in May of 2012. The original European distributor of Scotland Yard, Ravensburger, has recreated the complex board game for iPad and iPhone and we wanted to know how it compares on both devices.

As a die-hard fan of the board game genre, I’ve spent some time with Scotland Yard on the iPhone, as well as the iPad and have an in-depth look at how the game plays on both devices… 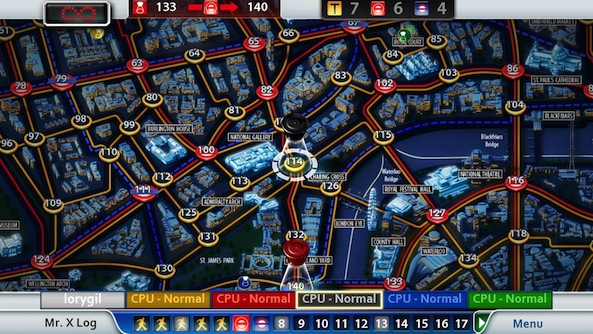 The first thing I noticed when I opened the app on my iPhone was that it does support the iPhone 5 screen. The splash page seems a bit constricted as compared to the iPad. The words are smaller and closer together. However, the graphics still look as good as they do on the iPad. Even on the 4-inch screen, the images are crisp and clear. My only complaint is that words are fairly small. However, I don’t think anything can be done for that.

The music is pleasantly unassuming. It reminds me of a British espionage movie. The sound effects add to the player’s involvement. Whenever a pawn moves, the game plays a sound effect that represents what type of transportation was used.

The game’s movement is a bit on the slow side. Oftentimes, when I tapped a new spot on the board to move to, nothing would happen and I’d have to tap it a second time. When I swiped across the screen in order to look around on the board, the view would change very slowly. This does not happen on the iPad, so I assume that the smaller screen has a harder time registering my gestures.

Just like with the iPad version, the computer-generated turns take forever and there is no way to speed things up. You just have to wait until all other characters have had their turn. It would be nice if the developers would update this so that CPU opponents’ turns could be fast-forwarded. 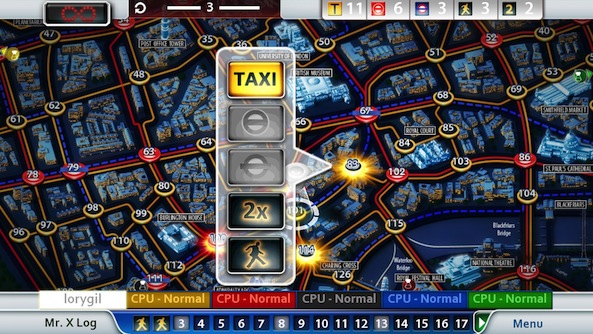 This game can be played alone, or with up to six players in total. You can play with friends through pass-and-play style gaming, by linking your devices over local Wi-Fi or Bluetooth, or online through Game Center. If you play alone, you can select between one and five computer-generated opponents.

You can choose to play as either Mister X or one of the detectives. If you play as a detective, your goal is to apprehend the criminal by consorting with your fellow detectives. The game is best played with a minimum of four pawns so that three detectives can work together to find Mister X.

To catch the villain, the detectives must land on the spot he is currently on. You see, detectives can’t see Mister X thanks to his roguish abilities. They can however, determine his whereabouts with a bit of sleuthing and deducing based on how he is getting around, which detectives do know.

There are three different forms of transportation in the game, taxis, buses, and the underground train. The routes available are represented by yellow, red, and blue lines on the board. The mode of transportation that Mister X uses to get from place to place is always made available to the detectives.

Mister X’s position is revealed every five rounds, except the first time, which happens after the third round. When he is revealed, players can start trying to predict his future whereabouts based on his location plus his movement.

For example, if you know that Mister X’s current location is at station 94. You will also be able to deduce that he can move to one of five different neighboring stations. If he uses a taxi, you’ll know that he could have only moved to one of two different stations, narrowing down the area he might possibly be.

This is why teaming up with a group of detectives makes the game much more fun to play. You don’t have to play with four people, though. You can choose to play multiple detectives yourself or give some of the work to a computer-generated player. For example, if you are playing with one other person, the player who is taking on the role of a detective can decide to play with all five pawns, giving them five times as many chances to catch up to Mister X.

If you decide to play Mister X, the only thing you will need to do is stay away from the detectives. If they start to catch up to you, which they will probably do because your location is revealed every five rounds, you can make a fast getaway using special tickets that allow you to either double move, or move without revealing your mode of transportation. These special tickets are just what you need in a pinch, but they are limited, so use them wisely.

The rules are based on traditional pursuit-evasion equations. If you like playing games that deal with percentages and statistics, you will be engrossed in this game before you can even say, “Jack the Ripper.”

If you are not used to paying such a premium price for games, you may be shocked at the $5.99 price tag. However, this is not unusually high for a ported board game. A lot of work goes into recreating these classic games for iOS. Ravensburger is particularly good at presenting a quality item that does not disappoint gamers.

Since this game is universal, you can play it on your iPhone and your iPad without having to pay for the game twice. If you like board games, $5.99 is a reasonable price to pay for this app.

Scotland Yard is an excellent app for fans of deductive pursuit evasion games. If you played the original board game from the early 1980s, you will love this iOS recreation. If you have an iPad, I recommend playing the game on the larger-screen device over the iPhone. While the game is fun and plays the same on either, it is just easier to see everything on the iPad.