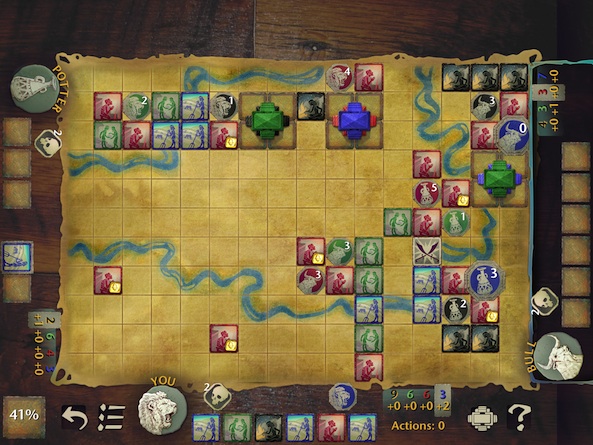 As a self-proclaimed board game fanatic, I feel compelled to seek out every digital version of my favorite games, as well as ones that I’ve never played. Sometimes, a low-priced digital board game will prompt me to spend the big bucks on the real deal.

Reiner Knizia’s Tigris & Euphrates is an empire building board game that uses tile placement as a means to take over a kingdom. This is one of those games I’ve seen on the shelf at my favorite board game store, but never had a chance to play. If the physical version is anything like the digital, I’m in…

This game uses a realistic board game theme. There are no animated tokens or three-dimensional castles. Just like a real game, the board is flat and the tiles are too. The game’s landscape consists of a grid with 176 squares. Each player has six tiles in their hands. There are four different colors of tiles, each representing a different aspect of a kingdom. For example, the blue tiles represent farming and have a hieroglyphic-like image of a farmer on them. Red tiles are for temples and have a man bowing in prayer on them.

There is room for four players on the board. Each player’s place is on one of the four sides of the iPad, similar to a real-life game. The players’ names are listed next to a symbol, like a lion or an archer. This symbol represents your empire and tiles that are adjacent to your symbol belong to your kingdom.

There is an epic tutorial for those who have never played the game before. It is very long. In fact, you will play an entire game with two computer-generated opponents. However, the tutorial is very helpful in understanding why it is important to perform certain actions at certain times.

You can play up to 12 local games at the same time. You can also play against real life players through Game Center. You can find friends to play with, or compete against a random opponent.

The entire set of rules are also included with this game so that you can really get to know how it works and read up on the best ways to defeat your enemy. 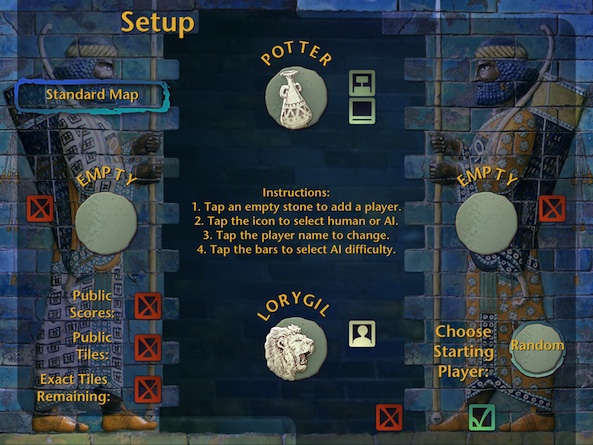 I have never played Tigris and Euphrates before, so I started off by playing the tutorial. Admittedly, I wanted to skip it about halfway through the game and just get started. However, speaking from experience, I know how easy it is to get overwhelmed with the rules of a game. So, I decided to keep playing. The tutorial is a great help for new players. If you’ve already had a few rounds with this game, skip the tutorial and let the game’s hint feature help you instead if you get stuck.

To play a game, first decide whether to play local or online. Local means that you play against others in the same room with you in a pass-and-play style game. You can also play a solo game in this mode and choose up to three computer-generated opponents. Adjust the level of experience your CG opponents have, so they won’t mop the floor with you, nor will they be too easy to beat.

The goal of the game is to have the biggest empire. However, your empire must be evenly populated. This is where the game involves the most strategy. The lowest number of types of population determines your empire’s score. If you have 15 farms, but only 10 temples, your final score will reflect the 10 temples.

Each player has four population types to play, called spheres of civilization. Play a leader in a region, and then add sphere tiles to build your kingdom. You can build multiple kingdoms and combine them with proper strategy.

You can also invade your opponent’s kingdom by placing one of your tiles in their region to create a conflict. Conflicts arise when two leaders of the same color occupy the same region.

To play a tile, touch and drag it to the place on the board that you want it to go. The tutorial and hint section includes tips on the best way to build a strong empire. For example, if you place four like-colored tiles in a square position, you can build a monument that will offer additional points.

While this is a typical empire building game, it adds a strong strategic element that requires a lot of planning and foresight. The goal is not only to have the biggest kingdom, but it is also to have the most balanced one.

This is a great way to be able to play a full board game at a fraction of the cost. This app does not reduce the game’s controls to an animated adventure. You must understand all of the elements in order to be able to win the game. I love being able to play solo so that I can practice my land grabbing. The online multiplayer mode is great for playing against others who might be just as fanatical about board games as you, but live in a different time zone.

Because this game is so complex, it is not for everyone. If you are familiar with empire building board games, you will be able to pick up the rules of this game fairly easily. However, if you are new to the digital board game genre, you may want to try something easier to star with. 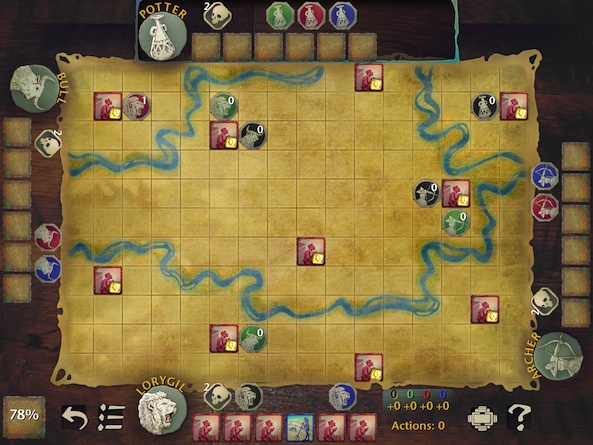 Considering the physical board game will cost you $50, the price of this app is outstanding. Most board game renditions run in the $4.99 price range, so this one fits right in with the rest of the genre. Since it is a full, digital version of a physical game, it is a great bargain.

Reiner Knizia’s Tigris & Euphrates is an excellent digital transfer of a physical board game. If you have played the original, this is a must-have mobile edition. If you’ve never played the game, but are a fan of empire building games like Catan, you’ll enjoy the challenging strategy that this game brings.