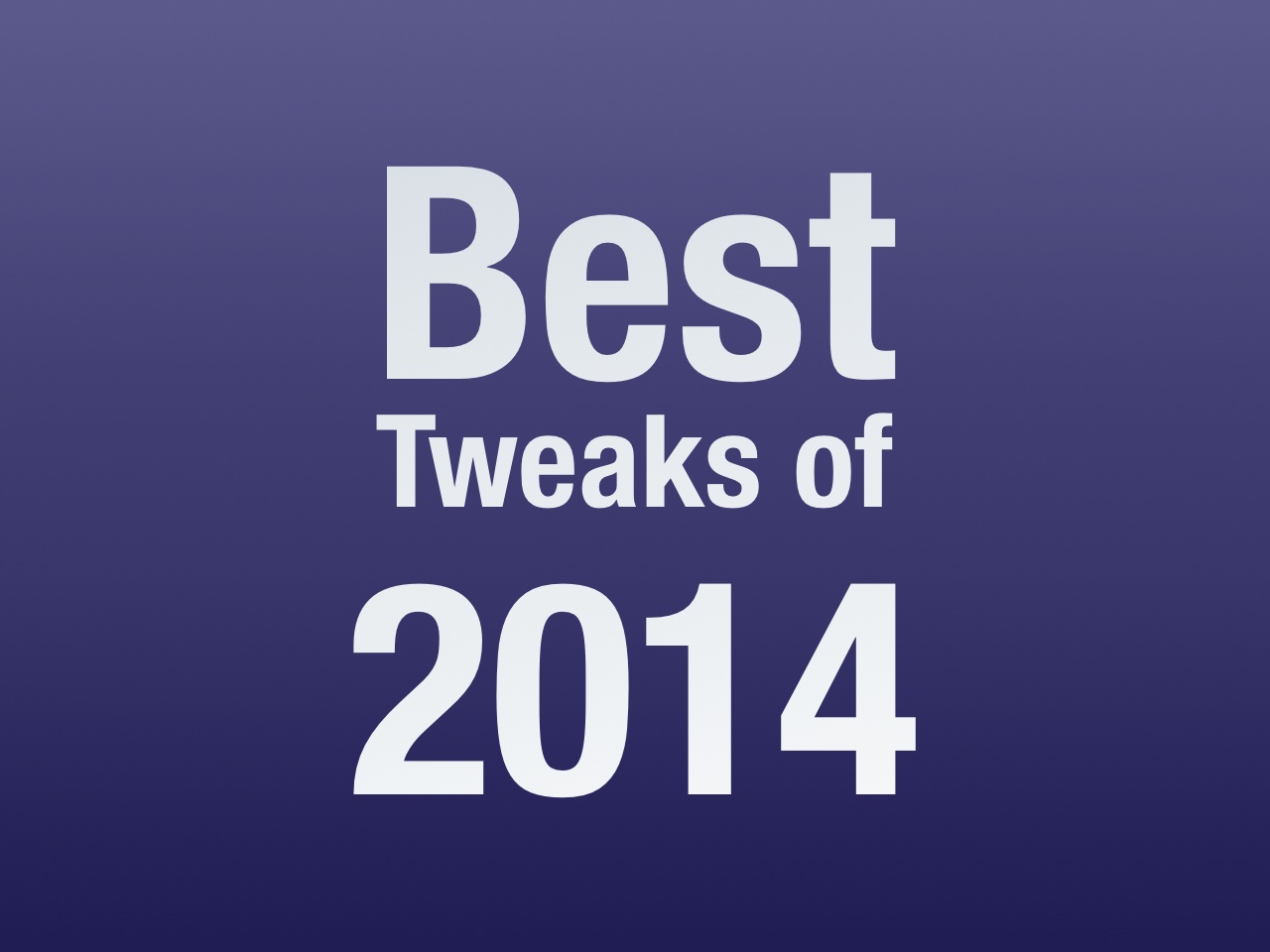 Ladies and gentlemen, boys and girls. It’s the end of 2014, and that can only mean one thing: it’s time to compile our list of the best iOS 8 jailbreak tweaks of 2014.

To be eligible to make this list, the jailbreak tweak or app must have been released in 2014, it can’t be an update or a sequel to another tweak released prior to 2014, it must work on the latest iOS 8 jailbreak, and it must be compatible with the iPhone 6 and 6 Plus. That means that tweaks like Auxo 3, which would have otherwise made the list, are not included. I know those are some pretty tough regulations, but by doing it this way, we ensure that we have an original list full of fresh and new jailbreak apps and tweaks that you can use today.

Okay, enough talk. Let’s get into our list of the best jailbreak releases of 2014. Will your favorite tweak make the list?

Listen to Let’s Talk Jailbreak Episode 88: We discuss and break down our selections for the top tweaks of 2014, including the top tweak of the year honors.

I’ve tested all of these tweaks one-by-one on a jailbroken iPhone 6 Plus running iOS 8.1.2. Some tweaks, although they meet other criteria, were eliminated from contention due to the fact that they didn’t work well with the latest jailbroken firmware or didn’t play nice with the iPhone 6.

Developed by Jay Zuerndorfer, PM, really? is an extremely practical jailbreak tweak that can help prevent you from making the catastrophic mistake of setting your alarm for the evening instead of the morning. PM, really? prompts you for a confirmation whenever you try to create an alarm for PM instead of AM.

I felt this tweak deserved to be on the list because it solves a real issue. It doesn’t happen often, but I’ve personally experienced how it feels to wake up late and realize that my alarm never sounded due to being set to PM instead of AM. I also like this tweak because it’s completely original, and doesn’t mimic any other tweaks on Cydia. Good job, Jay.

evilgoldfish’s LockGlyph is a jailbreak tweak that spices up the experience of unlocking your iPhone. It does so by adding the Apple Pay confirmation animation and sound to the Lock screen. It’s a stylish tweak that adds some flair to the Lock screen, but I’ve been most impressed by evilgoldfish’s diligence when it comes to adding new features to LockGlyph, taking requests, and keeping it compatible with the latest firmware.

If Aaron Ash’s Barrel jailbreak tweak is one of the best tweaks to show off a jailbroken iPhone, then it stands to reason that Cylinder, a tweak heavily inspired by Barrel and released this year for free, deserves to be on this list. Reed Weichler’s Cylinder brings an astonishing 35,184,372,088,832 different Home screen icon animations to the table, and you can also create your own animations using handy Lua scripts. Yes, the Barrel inspiration is undeniable, but Cylinder is impressive enough to stand on its own.

One of the most annoying things about the stock Music app is that you can’t queue up music when a song is already playing. Aria solves this problem by bringing “Play Next” and “Play Last” capability to the Music app. But that’s not all. Aria provides users with an interesting new grid view among other niceties to spice up the aging Music app.

The ability to use HeySiri without being tethered to a power connection can make all of the difference when your hands are full and you can’t interface directly with the iPhone’s Home screen. UntetheredHeySiri is the first jailbreak tweak that allows you to do such a thing, and it integrates perfectly with the stock Siri preferences in the Settings app.

Note: While technically a sequel, we felt this tweak deserved to be included since its predecessor was created in 2014. It wouldn’t be fair to punish the developer for keeping their tweak, which debuted this year, updated for iOS 8.

There are plenty of Apple Watch UI concepts available, but Aeternum stands above the rest as being the best. Aeternum has been updated numerous times, it’s stable, fully theme-able, and battery friendly. If you want to know what the Apple Watch UI looks like in person, then Aeternum is your go-to tweak.

Note: This developer has multiple tweak of the year nominations. The other is iTouchSecure.

There are lots and lots of screenshot jailbreak tweaks on the Cydia store, but none of them hold a candle to Almpoum, a tweak that is simply a must-have for heavy screenshot takers. Almpoum allows you to upload screenshots to Imgur, save screenshots to specific albums, and quickly share a screenshot via AirDrop or any other utility appearing in the iOS 8 share sheet. It makes my job a whole lot easier.

Note: This developer has multiple tweak of the year nominations. The other is BioLockdown.

If you’re a gamer, then it’s easy to see the value of Controllers for All. Here is a jailbreak tweak that makes it possible to use your Wii U Pro Controller, PS3, and PS4 controllers with any game that supports Apple’s MFi controller initiative. There simply is no excuse not to have Controllers for All if you’re the least bit interested in gaming on iOS.

Now that users can use 1Password directly within Safari thanks to iOS 8’s extensions, it’s made life a whole lot easier. No longer do we have to switch between apps to copy passwords from our password management app of choice. But iOS still has some opportunities for improvement on this front, especially when it comes to using apps that feature no built in 1Password support. Enter iTouchSecure, a jailbreak tweak that allows you to save passwords for your favorite apps directly in the iOS keychain. That means that you can auto login to your favorite banking app using just your Touch ID fingerprint. It’s a time-saver if you manage your bank account using a banking app.

Note: While technically a sequel, we felt this tweak deserved to be included since its predecessor was created in 2014. It wouldn’t be fair to punish the developer for keeping their tweak, which debuted this year, updated for iOS 8.

Note: This developer has multiple tweak of the year nominations. The other is Aeternum.

Got two Instagram accounts? If so, you can’t normally use both on the same iOS device without logging out of one, and logging in with another. That, of course, is a real pain in the butt. Slices solves that issue. It allows you to log in to multiple accounts on the same app, even when said app doesn’t support multiple users. I use it to manage my personal and work Instagram accounts, and it performs perfectly.

Yet another Ryan Petrich created jailbreak tweak shows up on our 2014 list. BioLockdown is an excellent tweak that lets you passcode protect individual apps, settings, and even Control Center switches. The cool thing about BioLockdown is that it works with the Touch ID fingerprint sensor, providing you with excellent security for your most sensitive apps and settings. Once you use BioLockdown, you’ll be presented with a ton of different settings to customize and configure the tweak to your liking.

Note: This developer has multiple tweak of the year nominations. The other is LittleBrother.

Remember Zephyr? Well, Zephyr’s dead, but Tage is the closest thing we’ve seen like Zephyr since, well, Zephyr. Tage allows you to close apps and invoke the App Switcher using nothing but gestures. It brings the iPad-inspired Multitasking gestures to the iPhone, which lets you to switch between apps using swipes from the edge of the screen, and it has a quick switcher, which brings the ability to quickly between apps via the App Switcher using a single gesture! In fact, the Quick Switcher found in Tage might not be as pretty as the one found in Auxo 3, but I find it to be more responsive.

Tage is a very robust jailbreak tweak that makes navigating your iPhone with gestures easy and fun to use, and it features a ton of options and settings to configure it just to your individual liking. For that reason, it is without a doubt our jailbreak tweak or 2014.

Congratulations to Ryan Petrich and SpiritofLogic for picking up two Tweak of the Year award honors, and congratulations to Ma Jun for bringing home the award for best jailbreak tweak of 2014.

Thank you for reading and watching this year’s edition of the best jailbreak tweaks! Please use the comment section below to leave a remark, an opinion, or to congratulate your favorite developers.