Did you have an argument with your friend, girlfriend, colleague, relative, or family member, and your messages and calls are not going through to them anymore? It’s possible they blocked your number. But how do you find out for sure?

There isn’t a hundred percent sure shot method unless you ask the person directly via any other medium if they blocked you. But the tips below will take you closer and give you a good idea. Let’s go over the ways to know if you have been blocked by a particular person. 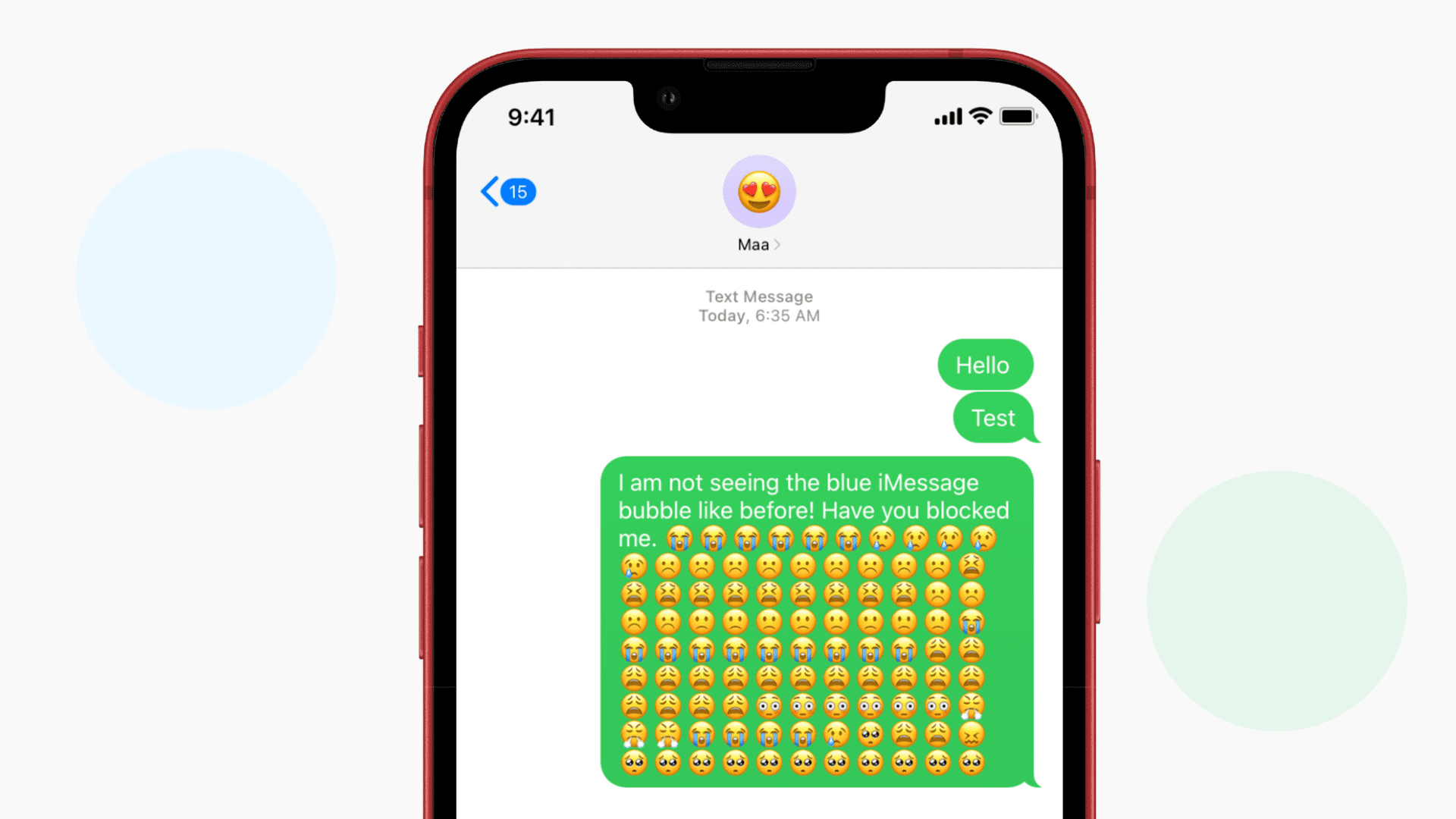 Reasons why you can’t reach someone

Here are some of the reasons you cannot call, text, FaceTime, or iMessage someone:

Before you begin: Please note that these methods only help you know to an extent whether someone blocked you or not. These aren’t definite methods. The only way to know for sure is to ask the person via other means or see their block list (a huge invasion of privacy).

How to know if someone blocked you on:

On iPhone, when you block a person, they are blocked from iMessage, SMS texts, FaceTime, and phone calls. So, if you block someone or someone blocked you, this cuts off these four essential communication methods.

To know if someone blocked you on iMessage, open the Messages app and send them an iMessage. Now, wait for a few hours. If you don’t see the “Delivered” text below your most recent sent text, it’s an indication of the following four things:

1) They blocked you. In everyday situations, you might not think of this. But if you recently got into an argument or hurt them in some ways, this can be the number one possibility.

2) Their iPhone isn’t connected to Wi-Fi or Cellular data for the last several hours, which almost no one does nowadays. People are always connected to the internet. If they keep their iPhone disconnected, that means they can’t use services like social media, YouTube, Uber, food delivery, maps, and such. So, most people do not stay offline for long unless it’s sleep or vacation time.

Ask someone else to send that person an iMessage, and if it says “Delivered,” you can be sure that you’re blocked as your sent message didn’t show you the “Delivered” status.

3) Their iPhone is in Do Not Disturb mode, due to which they have not received your notification (though ideally, even in DND, the sender sees the “Delivered” status below a message). In iOS 15, when the person’s iPhone is in DND, you might even see a banner informing you of their status. This means you aren’t blocked, but the person is just having some quiet time.

4) Their iMessage isn’t activated or has some problems.

So, after you send an iMessage and it stays undelivered for several regular hours or days, there is a strong possibility that the person has blocked you.

In my testing using my mother’s iPhone, I also noticed that if you’re blocked by the person, after a few messages, you might not see the iMessage option and blue text bubbles when you send a message. It may show as green bubble SMS or show “Not Delivered” below it. I tested this with just one contact, so please take it with a pinch of salt.

If an iMessage stays undelivered, chances are their iPhone isn’t connected to the internet. So, in this case, you can press a sent iMessage and choose to Send as Text Message. See if you get a response to your SMS or not. If not, chances are the person has blocked you or is certainly ignoring you.

Related: How to schedule text messages on iPhone

Suppose you call a person, and immediately your call goes to voicemail, or you hear the carrier response saying the number is busy, unavailable, etc. In that case, there is a strong possibility that:

1) You’re blocked by that person. When a person blocks you, calling them takes you to voicemail. You can send a voicemail which will be listed in a section called “Blocked” at the bottom of their Voicemail screen. They can listen to it if they want. But most people ignore the voicemails in the “Blocked” tab.

Important: Often, when you’re blocked, you’ll hear just one ring, and then immediately, you’ll be informed that the number is busy.

2) They are in a place with no cellular coverage. In this case, you might hear a response like out of coverage area, unavailable, unreachable, etc.

3) The person has silenced unknown callers. Due to this, they aren’t getting your call.

When you call someone on WhatsApp, and it rings, you see the word “Ringing.” This proves you aren’t blocked. But on FaceTime, whether you’re blocked on not, when you make a call, it has the same uninformative ringtone with no status like “calling,” “ringing,” etc., on the screen.

If you call a person via FaceTime and it repeatedly says “FaceTime unavailable,” that means:

Use the search box on Facebook and type the name they use on Facebook. If the person doesn’t appear in search suggestions of search results, they may have blocked you.

Another method involves searching for the person on Facebook Messenger. Most likely, it will not appear in search results. And if you go to a previous conversation you had with them, it will say something like that person is unavailable, or you can no longer send a message to them. In this case, you can rest assured that you have been blocked by them (or they have deactivated/deleted their FB account.)

You can also go to your Facebook friend list and type the person’s name. If that person was once a friend but now no longer appears in your friend’s list, that means they have blocked you or unfriended you.

Finally, if you have a person’s username, type their username after facebook.com/ and visit their profile while logged in to yours, it’ll show an error page. And if you visit the same profile link in a private browser tab, you will be able to see that the profile still exists. This should indicate that you’re blocked by the person on Facebook.

Twitter outright shows you if you’re blocked by an account. Simply go to their profile by using the search box, and there you’ll see if they have blocked you or not.

If their profile doesn’t appear in search results, visit their profile via someone else’s tweet, retweet, reply, etc. You can also search for their Twitter username on Google and then go to their profile from there. 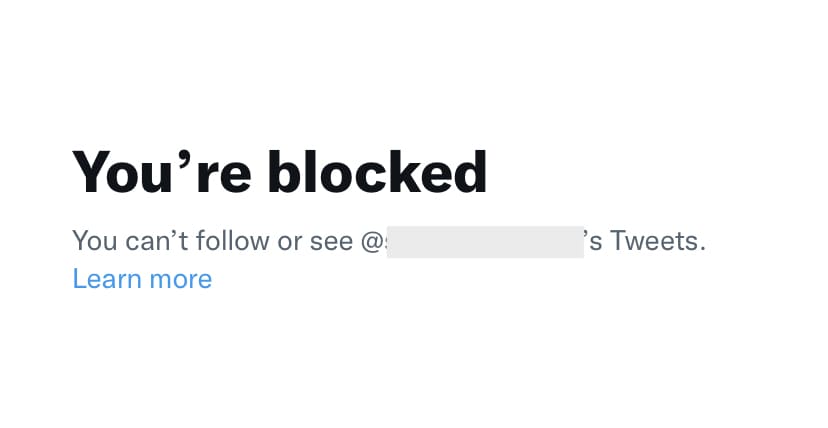 Use the Instagram search box and type the person’s or account’s name or username. If you can’t find their account in the search results, you’re most likely blocked by them.

In case their account was public (and not private), it may appear in the search results. But when you tap it to go to their profile, it will show “User Not Found” or “No Posts Yet” – 0 posts, 0 followers, 0 following, even though you once knew this person had many posts and followers.

Secondly, login to Instagram on your computer. Now, if you know their username, type it after instagram.com/, and if they blocked you, it will say, “Sorry, this page isn’t available.” In this case, they either deleted their Instagram account, changed their username, or have blocked you. Most likely, it’s the last option.

You cannot see the Snapchat stories and Snapchat score of someone who has blocked you or unfriended you.

Also, if you search for their name in your friend list and they don’t appear, it’s an indication that they have blocked you, unfriended you, or deleted their account.

If you had previously chatted with this person on Snapchat, try to find their chat in your recent messages. If it doesn’t appear, they may have blocked you. And in case it shows up, go to their chat and send them a snap. If it repeatedly says something like “Failed to send your message – Tap to try again,” chances are they have blocked you.

If you can’t see the person’s name, Status/Story, last seen, About text, or anything, it can be an indication that they blocked you (sometimes, people hide these things from strangers and even contacts.) But if your sent message stays at a single tick for a few days, this might undoubtedly mean the person blocked you on WhatsApp. Calls made to this person will fail as well.

Additionally, when you try to add someone to a group and it fails with a popup showing “you aren’t permitted to add them to your group,” chances are they blocked you. In newer versions of WhatsApp, you may be able to create a group with them. But immediately (to rule out the possibility of them manually leaving the group), when you go to that group profile, and the person is not under participants, that means they have blocked you.

Don’t be a stalker

If you find out that you’ve been blocked by someone on FaceTime, SMS, iMessage, or any social media platform, the right thing to do is to accept the blocker’s decision, respect it and move on. The last thing you want to do is to become a stalker trying to get to this person who clearly doesn’t want to hear from you.