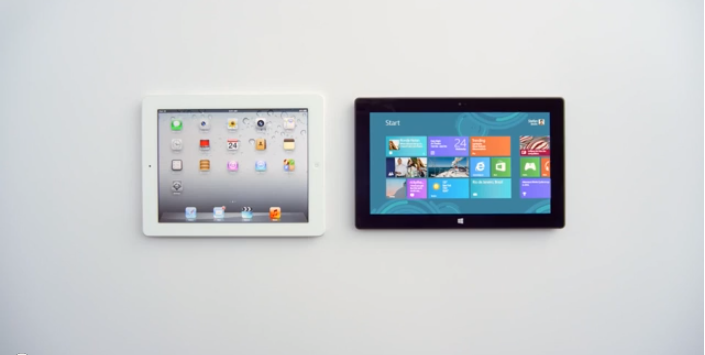 Microsoft just doesn’t skip a beat when it comes to its fantasy that the Surface rivals Apple’s iPad. Never mind the software giant had to reduce prices on its tablet because no one is buying the device. Never mind Thursday the company took a $900M writedown on those cheaper Surfaces that no one wants.

To mark all the features the Surface has (which no one except paid actors apparently want), the Redmond-based Windows giant has released another sneering ad pitting its tablet against Apple’s. This is what lesser-known brands quite often do as they strive to piggy-back on the popularity of the Apple brand…

Previous Microsoft ads dissed the iPad’s lack of an SD Card slot and its price.

The new one, a fifth anti-iPad spot thus far, again points fingers at the iPad’s lack of built-in support for USB, stand and physical keyboard while painting the device overpriced.

All the while the voice of Siri can be heard proclaiming the Surface’s superiority. Just as the price comparison is revealed at the end of the spot, Siri asks “Do you still think I’m pretty?”

Am I the only one noticing a disconnect between Microsoft’s promotion campaign for the Surface and the number of people actually buying the device? What we have here is not only a failure to communicate, but the last death throes of a company built around the PC.

Indeed, in some twisted logic aimed at aiding Microsoft, researcher Gartner recently pronounced Apple’s PC sales had fallen, yet failed to count the best-selling tablet made by Apple.

Gartner did count Windows tablets because Windows 8 is a “proper” desktop-class OS. By defining the Surface as a PC, the research firm gave Microsoft a boost where none really existed.

Perhaps Microsoft can prevail in the area of smartphones, having lost the race in PCs and tablets?

The Windows maker recently touted the Windows Phone Lumia from Nokia is outselling BlackBerry. As one watcher wrote on Twitter, the claim is “like bragging about having the hottest date in prison.”