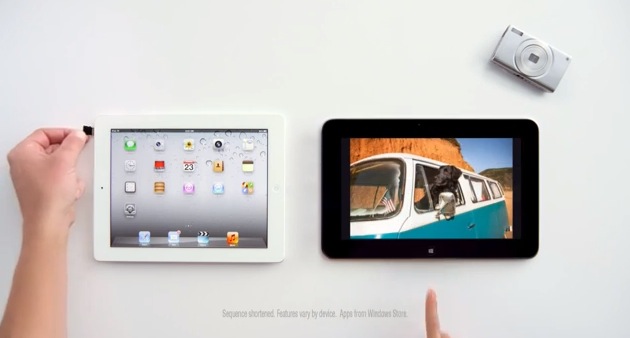 Microsoft — the company behind the Surface RT (lol) — has posted another attack advertisement going at Apple’s iPad. The ad makes fun of the iPad’s lack of SD Card compatibility, its inability to run apps side by side, and its price. It’s a decent ad, but their comparison points just don’t stack up if you ask me.

No one really cares if you can’t zoom out to view all apps ala Windows RT, and at this stage in the game, many couldn’t care less about using an SD Card. Most of the attack points are pretty weak, and when you think about it, Microsoft has little to no room to talk when it comes to the RT version of Windows. Perhaps I’m a bit biased, but I think I can speak with authority on this, as I purchased a Surface RT at launch, and used it extensively for months. The hardware is decent, but it’s the operating system — Windows RT — that really makes the Surface and tablets that use RT a bad choice.

RT suffers mightily from the lack of apps. The fact that you can’t run native Windows apps on RT is a major downside, as Microsoft’s Windows Store selection positively is mediocre at best. So, true, Windows RT can pull off all of those gimmicky features, but the stuff that matters — apps — is a different story altogether. Notice that Microsoft didn’t once mention or showcase any of the device’s killer apps? That’s not the slightest bit bizarre. No, that’s totally normal. And don’t even get me started on the true amount of storage space included on that “32 GB” Windows RT tablet that’s $399 for a limited time.