It’s been a crazy couple of weeks for the jailbreak community thanks to a slew of jailbreak tool updates from both the checkra1n and unc0ver teams adding support for iOS & iPadOS 13.5. Thankfully, we’re here to help keep you apprised of the best of the latest jailbreak tweak releases.

In this roundup, we’ll show you all the best jailbreak tweaks released from Monday, June 1st, to Sunday, June 7th. As usual, we’ll start things off by showcasing our favorite releases and then wrap things up with an outline of everything else afterward. 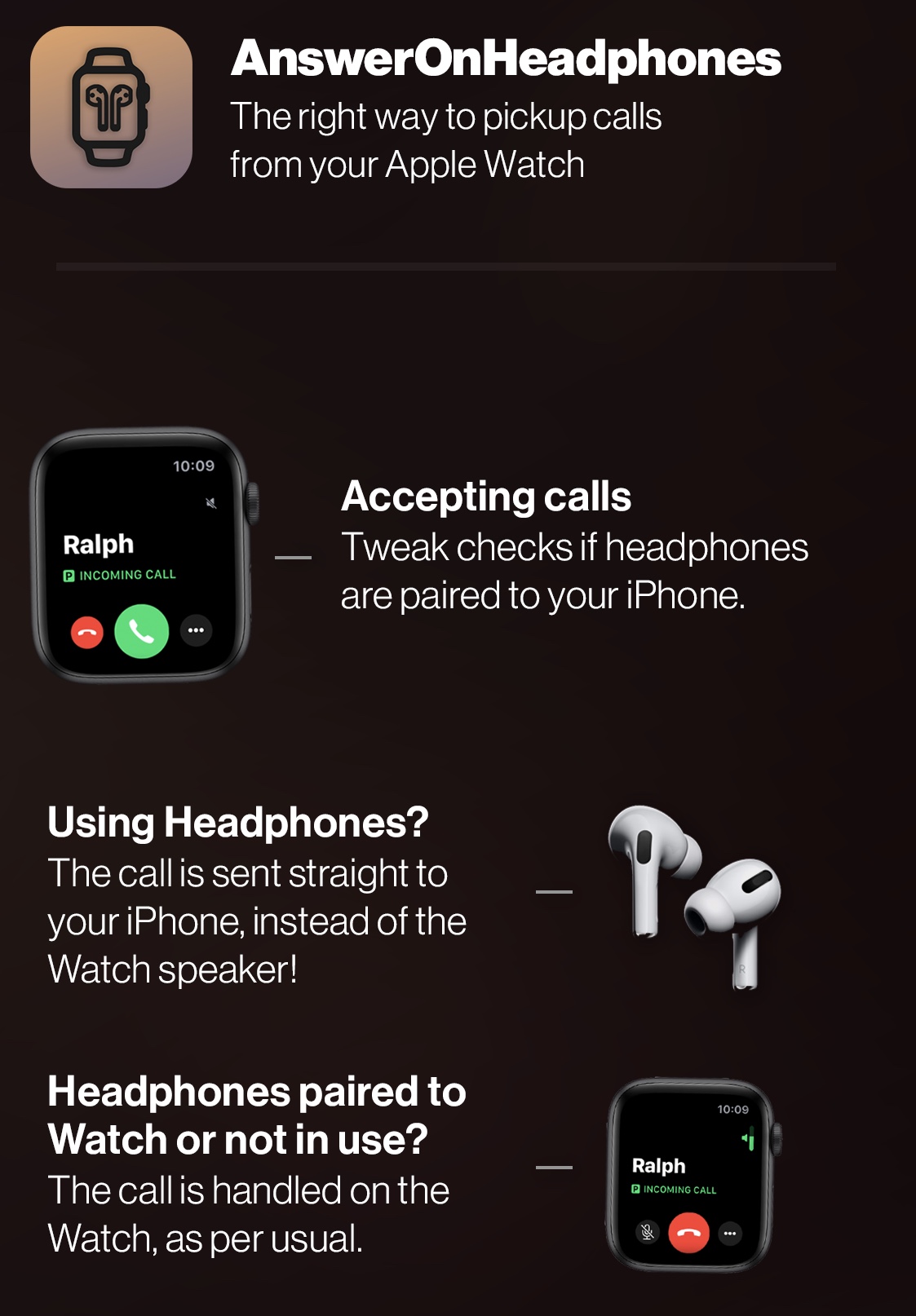 AlwaysOnHeadphones is a simple solution to a very real problem that comes by way of accepting phone calls on your Apple Watch when you’re using a Bluetooth headset or headphones: it forces audio to play through your Bluetooth device instead of the Apple Watch’s built-in speaker.

You can learn more about why this tweak is so essential for Apple Watch users in our full review. 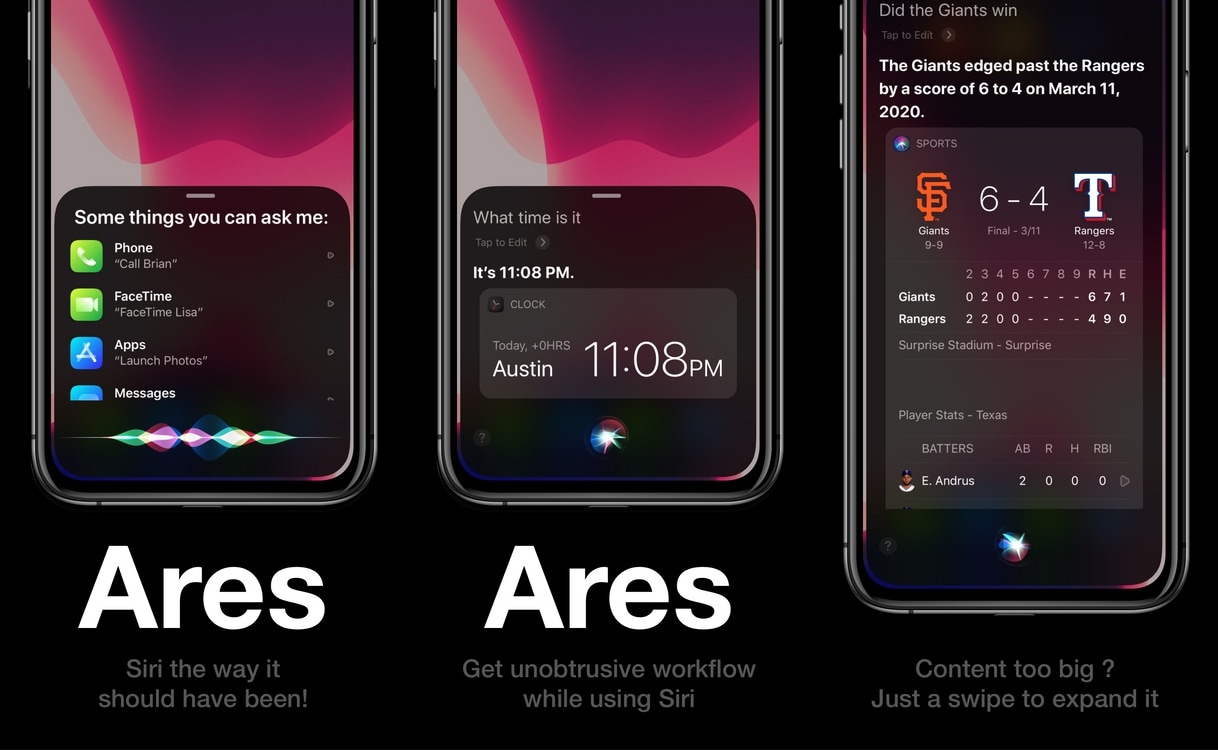 Ares is a redesigned user interface for your Siri personal assistant. It shrinks the full-screen Siri interface into a space approximately the same size as the AirPods pairing interface, and best of all, it doesn’t take away from Siri’s functionality in any way, shape, or form.

If you demand even less intrusion than that, Ares also provides users with a notification banner-sized Siri interface that barely covers any of your user interface.

You can learn more about Ares and what it can do for you in our full review. 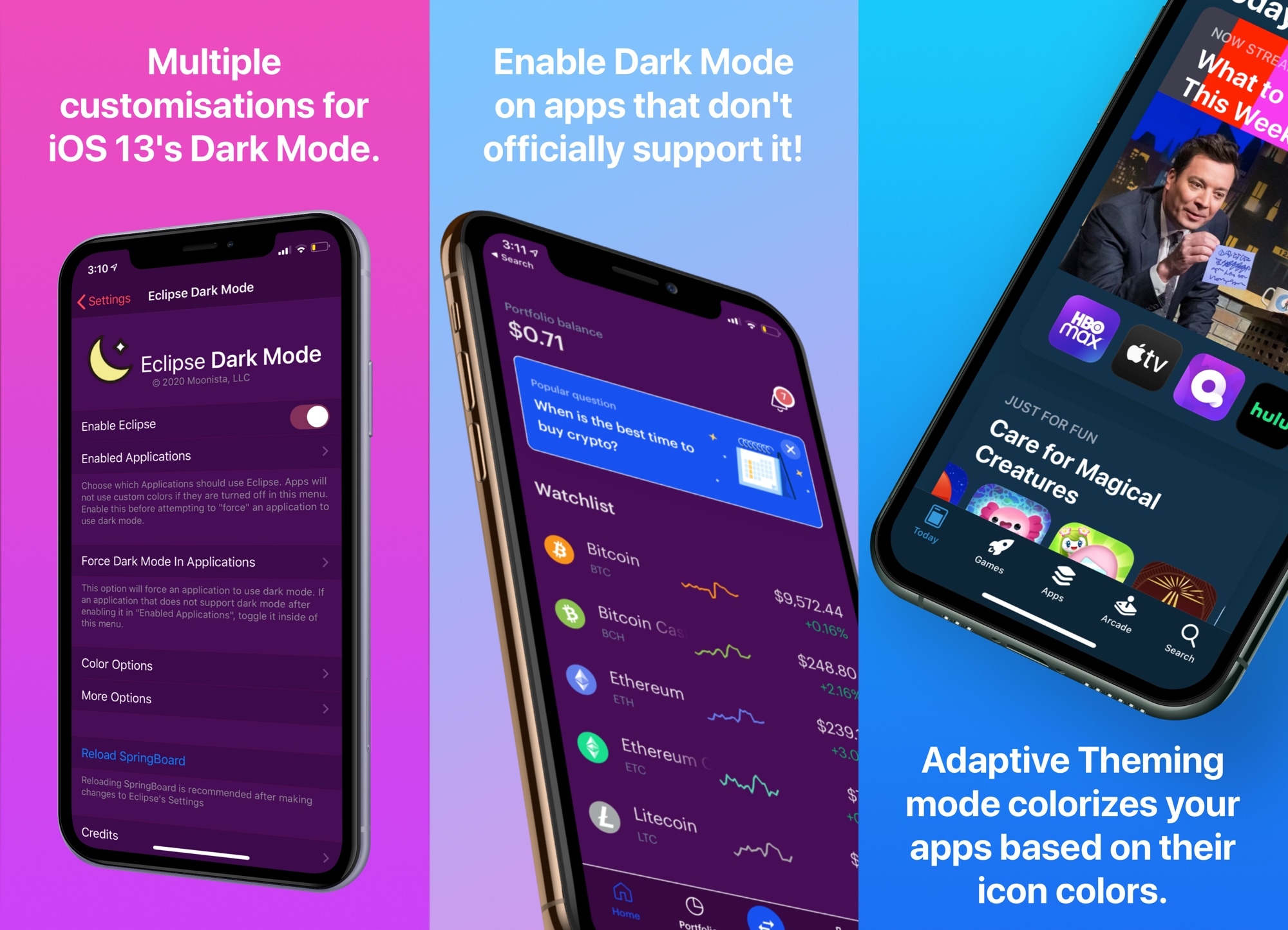 iOS 13 may come with dark mode right out of the box now, but that doesn’t mean everyone likes Apple’s native implementation, and that’s where Eclipse for iOS 13 comes into play.

Two of the native implementation’s most significant annoyances are when dark mode doesn’t apply to certain apps and the fact that some people would prefer pitch black dark mode instead of alternating black and dark colors. Eclipse for iOS 13 lets users customize their dark mode colors and more, and it’s a great way to get more out of dark mode if you’re using an iOS 13 device.

You can learn more about Eclipse for iOS 13 in our full review.

One of my biggest pet peeves with Apple’s Notes app is that when you update a note, the date and time on that note becomes updated as well. This makes it more difficult to discern when that note was first created, as it overwrites that indicator with a last updated date and time instead.

With a new jailbreak tweak called NotesCreationDate13, you can more easily tell both when a note was last created and when it was last updated, as it spells out both timestamps for you at the top of every note you create.

You can learn more about NotesCreationDate13 in our full review.

App Firewall (iOS 10-13): A smart firewall that can prevent apps from talking with the internet (free via BigBoss repository – review)

Bubble Apps: A quick launcher for all your favorite apps ($1.50 via Packix repository – review)

Dismisser: Dismiss SpringBoard alerts by tapping anywhere outside of them (free via Dynastic Repo repository)

DoNotAutoLock13: Lets you specify certain apps that will prevent your handset from locking automatically (free via moyashi repository – review)

Enlighten: A low light mode for the iPhone’s camera ($1.99 via Packix repository)

ExactTimeMail: Makes it easier to discern when emails were sent and received via the Mail app (free via Packix repository – review)

ExternTone: Lets you import ringtones to your iPhone rootlessly without iPhones (free via mario repository)

HoldToViewNotification: Fixes a haptic feedback issue with notifications on the iPhone 8 (free via BigBoss repository)

HomeIcon13: Lets you define the number of columns and rows of app icons on your Home screen and more ($0.72 via Twickd repository)

KeepMyJB: Removes the “Software Update” and “Erase All Content and Settings” tabs in the Settings app (free via Packix repository)

MsgSwap: Makes it easier to send photos in the iOS 13 Messages app (free via BigBoss repository)

PercentNotify: Notifies you when your battery reaches a certain level (free via onelesslagger repository)

RainbowCCSwitches: A revolving rainbow of colors for your Control Center toggle and shortcut buttons (free via yoshi-chill repository)

RedditRefresh: Prevents you from accidentally refreshing in Reddit (free via kodeycodesstuff repository)

Snell: Lets you get creative with the appearance of your iPhone’s pop-up alerts ($1.49 via Dynastic Repo repository – review)

SpotiLove: Lets you add Spotify tracks to your ‘Liked’ song list from the Lock screen (free via Twickd repository)

TweetsFilter: Lets you filter and hide all and any Tweets in the Twitter app containing a certain word (free via BigBoss repository)

UnlockVol13: Lets you change your handset’s volume level even when it’s locked (free via keshavbabu’s repository)

VolumeSwap: Flips the functionality of your handset’s volume buttons when it’s upside-down for a more realistic effect (free via PopsicleTreehouse repository)

WatchBuddy: Displays your Apple Watch’s battery level on your iPhone’s Lock screen at all times (free via paddycodes repository – review)

That’s all we’ve got for you this week, but if you’re still itching for more, then check out our roundup of some of the best jailbreak tweaks for iOS 13. If you haven’t jailbroken iOS 13 yet, then perhaps you should brush up on 10 good reasons to jailbreak in 2020.

Remember to tune into iDB throughout the upcoming week for more jailbreak and jailbreak tweak news as it breaks. We continuously cover new developments.

What was your favorite jailbreak tweak release this week? Let us know in the comments below.