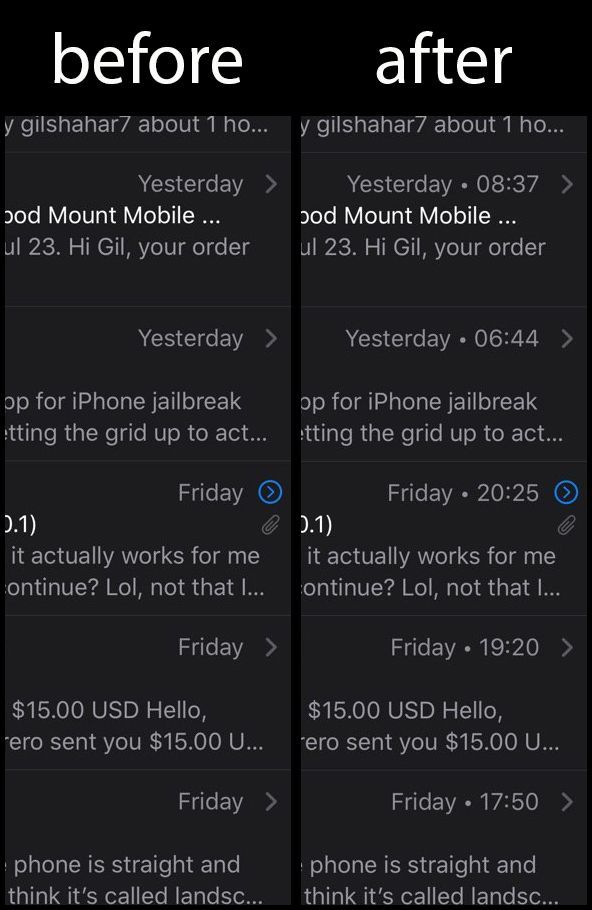 Just yesterday, we showed you a well-received jailbreak tweak named NotesCrationDate13 by iOS developer gilshahar7 that displayed more detailed timestamps in iOS’ stock Notes app, but wouldn’t it be nice if we could have improved timestamps elsewhere throughout Apple’s mobile operating system?

Gilshahar7 appears to share this popular opinion, as a newly released jailbreak tweak called ExactTimeMail seems to do this exact thing in the native Mail app. ExactTimeMail is part of a family of tweaks intended to make timestamps more intuitive in iOS, and we’d say it succeeds on every level, with other members of that family being ExactTime (for notification banners) and ExactTimeMessages (for the Messages app).

In the before and after screenshot examples above, you’ll see what ExactTimeMail does to improve the timestamp system in Apple’s Mail app. It transforms what would typically be a rather vague timestamp denoting only the day (or date) that it was received into something that shows both the day and the time of that day in the same text string.

So why is this such a big deal? When you get as many emails as I do, having just a day indicator isn’t as revealing in terms of when those messages were sent or received. Having the time in addition to the day makes it easier to keep track of messages, and makes it easier to follow up in appropriate time-frame as needed.

This is something that I wish Apple would implement out of the box, however it seems unlikely that we’ll see anything like this any time soon given Apple’s slow approach to integrating commonsense features into iOS over gimmicky ones like Memoji. That aside, the most recent jailbreak supports a signed firmware (at the time of this writing), and so obtaining this feature is only a few taps away.

Those interested in trying ExactTimeMail can download the tweak for free from the Packix repository via their preferred package manager. The tweak supports jailbroken iOS 13 devices and is open source on the developer’s GitHub page.

Do you think ExactTimeMail will make a difference in your email experience on the iOS platform? Let us know in the comments section below.