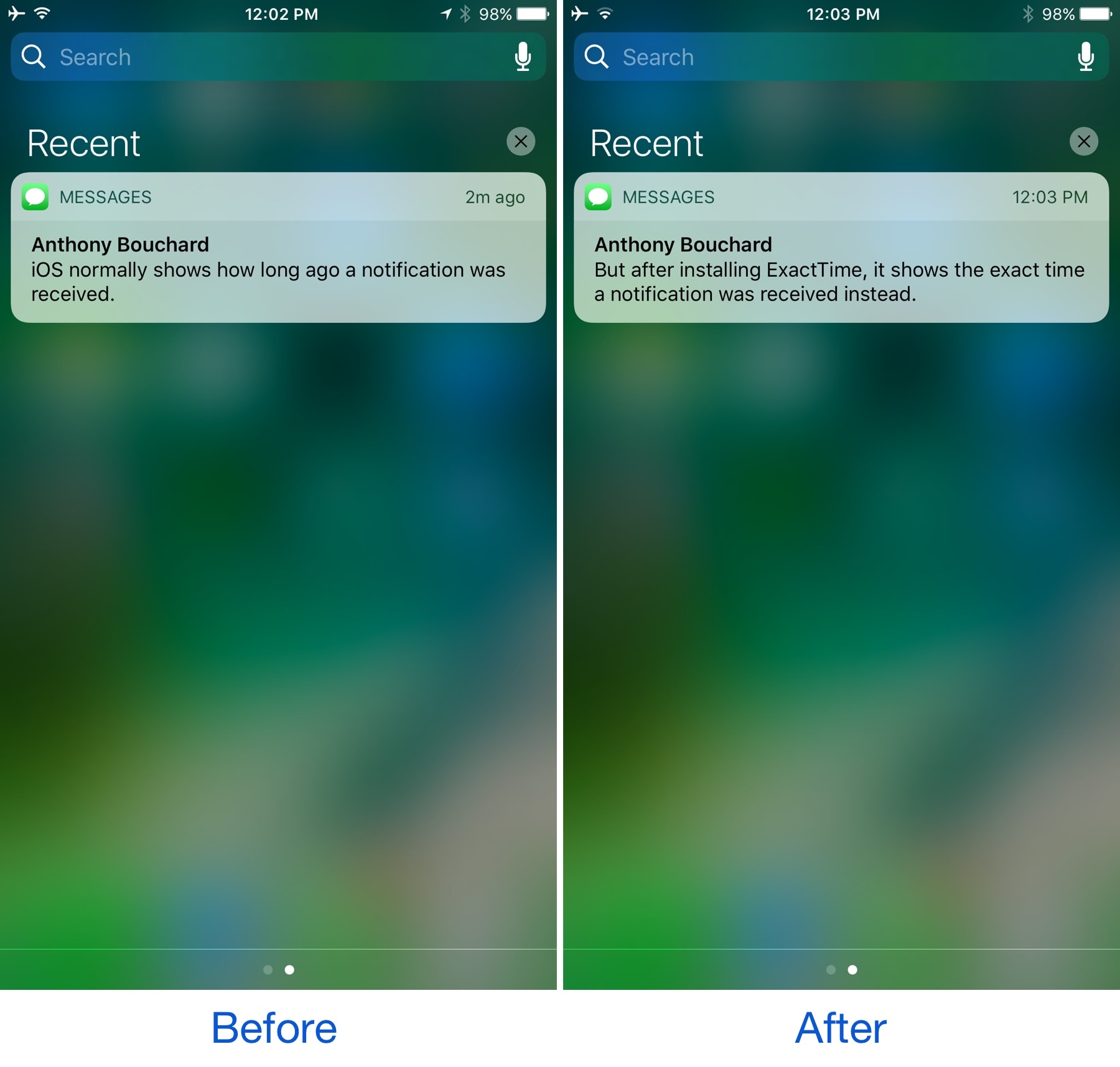 When there are missed notifications on your iPhone or iPad, a summary of what’s awaiting your attention is available in Notification Center. Each notification header displays an estimate of when it was received, but it’s not always as descriptive as you might want it to be.

A new free jailbreak tweak called ExactTime by gilshahar7 helps improve on this tiny frustration with iOS notifications by providing an exact time received in the notification header, rather than just an estimate.

In our example above is a comparison of how the notification received estimate looks in the banner header before and after installing ExactTime.

As indicated in the before view, iOS normally displays how the notification was received two minutes (2m) ago. If it were to go a longer period of time without being ready, it could alternatively say something like X hours (Xh) ago, or perhaps even X days (Xd) ago, depending on how old the notification is.

For example, if a notification says that it was received two hours ago, iOS would display “2h” in the banner header. In this instance, you wouldn’t know if you received the notification 2 hours and 15 minutes ago, or 2 hours and 45 minutes ago since iOS won’t give you any detailed information at a glance. iOS doesn’t round up the time estimates, so it won’t say “3h” in this case until it’s at least 3 hours old.

In the after view shown in our example above, ExactTime solves the complicated problem indefinitely by showing you exactly when the notification was received, right down to the very minute; this means the aforementioned guesswork becomes eliminated.

Because the phrase “different strokes for different folks” couldn’t be any truer for the circumstances surrounding this tweak, some people are going to like the change it has to offer while others could care less. As a result, the tweak isn’t for everybody, but if you’re among those who don’t like how iOS handles notification timeframe estimates out of the box, then ExactTime could be worth looking into.

If you want to try ExactTime out, you can download it for free from Cydia’s BigBoss repository. The tweak works on jailbroken iOS 10 devices only and doesn’t come with any options that have to be configured.

Also, for those who like seeing the inner workings of jailbreak tweaks, the developer posted the source code for ExactTime on GitHub for your viewing pleasure.

What are your thoughts on ExactTime? Share in the comments section below!