It was only yesterday that hacker and unc0ver lead developer Pwn20wnd released unc0ver v2.1.3 to the general public; but as it would seem, he’s not finished fine-tuning the iOS 11-centric jailbreak tool just yet.

In a Tweet shared Sunday afternoon, Pwn20wnd announced the availability of unc0ver v2.2.0 for public testing: 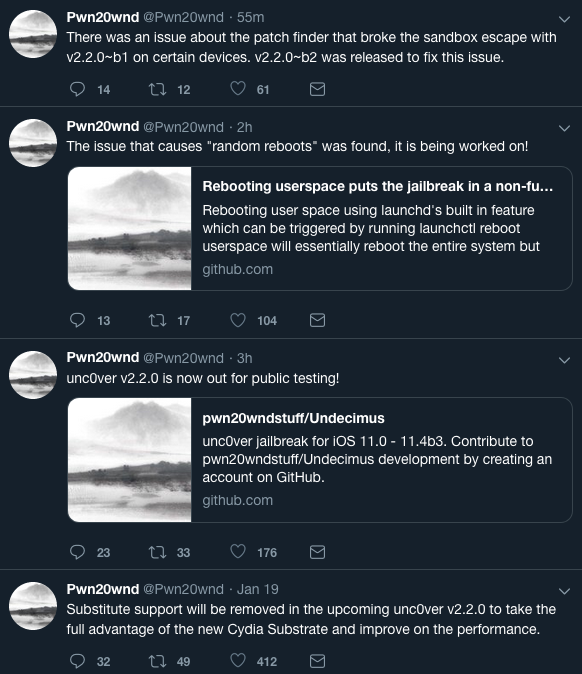 Shortly after dropping the first public beta, Pwn20wnd followed up with a second. The changelog published on Pwn20wnd’s official GitHub repository denotes that the unc0ver v2.2.0 pre-release comprises of the following changes:

– Validate Cydia Substrate files and reinstall it if the validation fails

– Fix a bug in switching from Electra without RootFS Restore

– Uninstall Electra’s Cydia Upgrade Helper if it is present

– Credit Saurik in the credits view for Cydia and Substrate

– Avoid writing to the disk when not necessary

– Fix a bug in initializing QiLin by removing QiLin

Some of the most significant highlights from the changelog include the native support for Cydia Substrate (this release drops support for Substitute), fixes to RootFS for users who switch to unc0ver from Electra, improvements to the speed of exploitation, and speed and performance improvements for the jailbreak overall.

Much like other ‘public testing’-oriented builds, this is a pre-release and should be treated as a beta rather than a public release. That said, only experienced jailbreakers with basic troubleshooting knowledge should consider running the unc0ver v2.2.0 pre-release.

If you aren’t comfortable using a pre-release version of unc0ver, then we advise you to use the latest official public release (v2.1.3) instead; it too can be downloaded from Pwn20wnd’s official GitHub repository.

What are your thoughts about the extensive changes coming in unc0ver v2.2.0? Discuss in the comments section below.