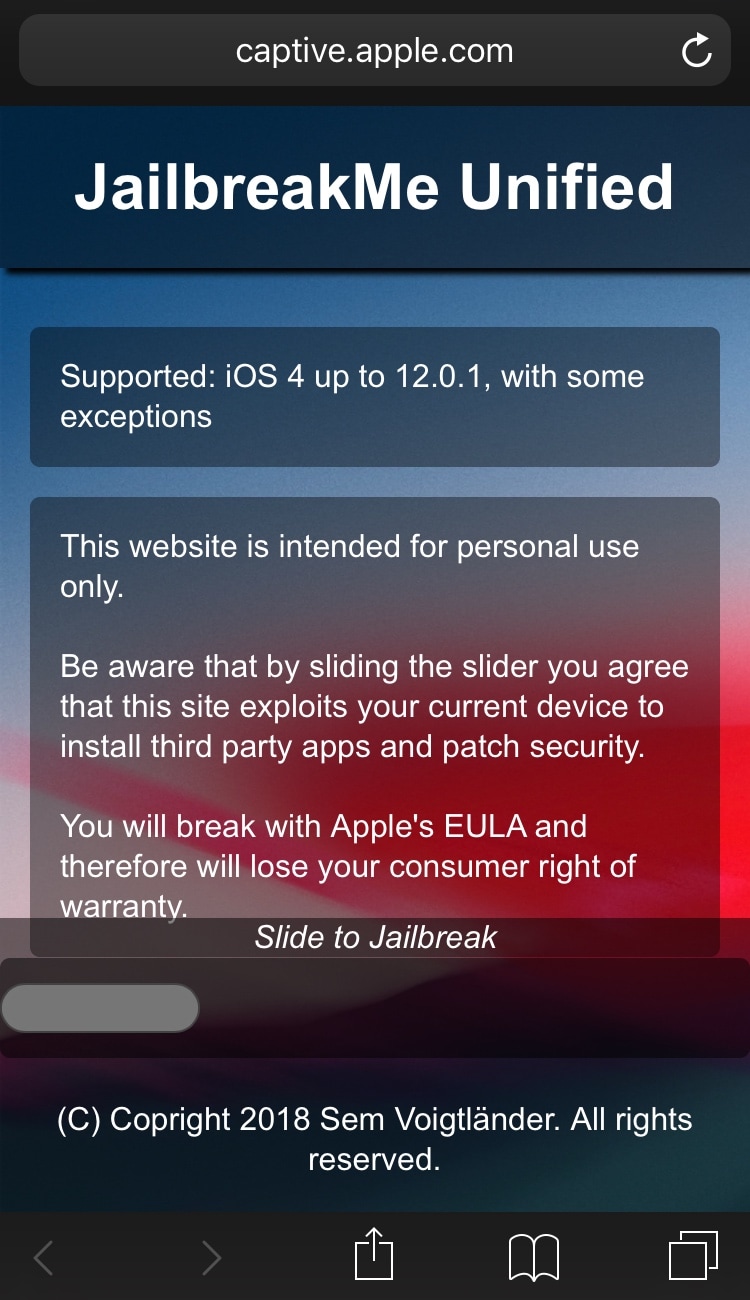 If you remember the good old days when you could visit a web page in mobile Safari and swipe your finger over a virtual slider to achieve a jailbreak (yes, I’m pointing at you JailbreakMe), then we’ve got some good news for you.

iOS hacker and developer Sem Voigtländer (@UKERN Software) appears to be working on a JailbreakMe-styled tool that you can visit in mobile Safari that theoretically supports iOS firmware versions from 4.0 to 12.0.1 (*with some exceptions*).

Upon visiting Voigtländer’s GitHub repository, it appears that he’s calling the tool JailbreakMe Unified. Behind the scenes are tried and true works from several prominent members of the jailbreak community, including:

The inclusion of these works doesn’t necessarily mean that these people are helping Voigtländer achieve a JailbreakMe-style jailbreak, but rather components being used in the tool (presumably exploits) belong to these people and Voigtländer is repurposing them.

It’s too early to tell whether the jailbreak will officially see fruition, but citing a post on /r/jailbreak, you can allegedly view the GUI for yourself right now by following these steps:

Step 2) In Safari, go to captive.apple.com and then you will see the GUI.

As always, we recommend approaching the project with cautious optimism. We haven’t seen a JailbreakMe-styled jailbreak since iOS 9, and even then, it was only compatible with 32-bit iOS devices.

As Voigtländer notes, this tool would have some exceptions in supporting iOS 4.0-12.0.1, but a full description of unsupported devices or firmware versions hasn’t been provided to the public at this time.

We’ll continue monitoring the project to see if anything materializes, but until then, you should take the work with a grain of salt and avoid harassing the developer with questions about a release or otherwise. As we’ve said for past jailbreaks, it will be ready when it’s ready.

Would you be excited for a JailbreakMe-styled jailbreak tool for iOS 4.0-12.0.1? Share your thoughts in the comments section below.