Star ratings are back in the Music app and Videos has its own widget. Oh, and you can now annoy friends with a brand new animation in Messages.

Without further ado, here’s our video hands-on with iOS 10.2 beta 1 accompanied by a detailed description of all the new features and enhancements.

iOS 10.2 beta 1 is available to developers who are members of the Apple Developer Program as well as to public beta testers that enrolled in the Apple Beta Software Program. iOS 10.2 beta 1 arrived a week after iOS 10.1 with Portrait mode on the iPhone 7 Plus released for public consumption.

As is our wont, we have analyzed iOS 10.2 beta 1 on our own devices in search of new features. Our resident video editor Andrew O’Hara then created a video hands-on to show you guys everything new and improved in iOS 10.2.

Don’t see the embedded clip? Watch it on YouTube!

Be sure to like and share video with friends and family and don’t forget to subscribe to iDownloadBlog’s YouTube channel on your way out for more cool vids from our team. Detailed overview of all the changes, improvements and new user-facing features in iOS 10.2 beta 1 follows further below.

All told, there are more than a hundred new and improved emoji in this iOS beta release, including 22 new emoji in the “Smileys & People” category, 18 new “Food & Drink” emoji and a bunch of emoji in the “Activity,” “Animals & Nature” and “Objects” categories.

Andrew’s short and sweet video highlights some of the best new emoji in iOS 10.2.

Apple continues to focus on gender diverse characters because some of the newly added profession emoji are available in both male and female genders by way of tap-and-holding. Additionally, many of iOS’s existing emoji have been visually perfected and redesigned in iOS 10.2 beta 1, such as the alien emoji.

Dang. The ancient Apple emoji — which were never really meant to be seen bigger than 32 × 32 — are redrawn quite well in iOS 10.2! Good job! pic.twitter.com/X6WskExq1D 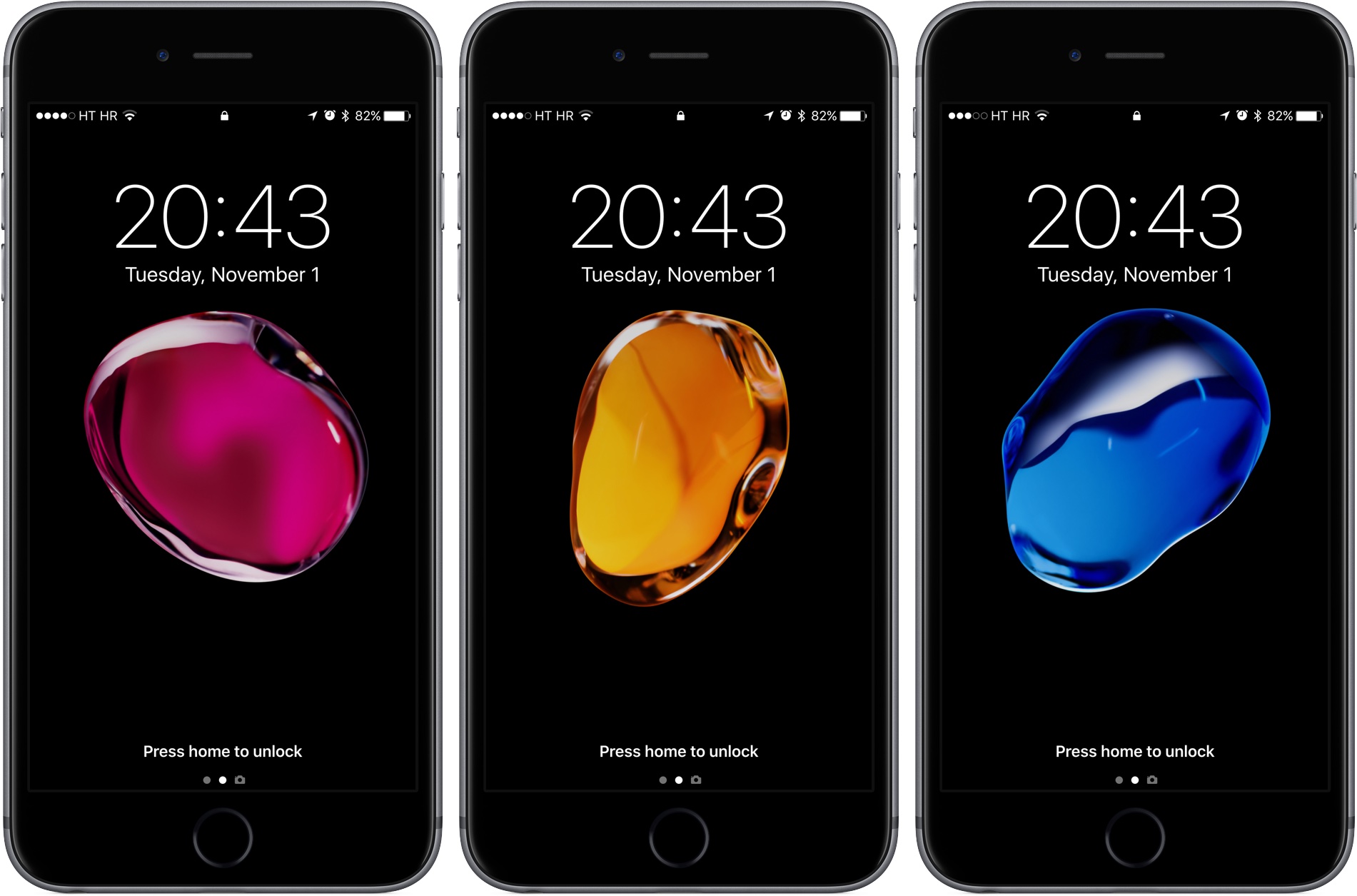 iDownloadBlog’s Wallpapers of the Week section has already highlighted the new wallpapers so check out Jim’s article if you wish to download and use these images on your iPhone, iPad or iPod touch.

iOS 10.2 beta 1 adds a new fullscreen animation to the stock Messages app, called “Celebrate”. You can use it like you would any other screen effect: type a message in the Messages text field, then tap and hold (or press with 3D Touch) the Send button to reveal the “Send with effect” menu. 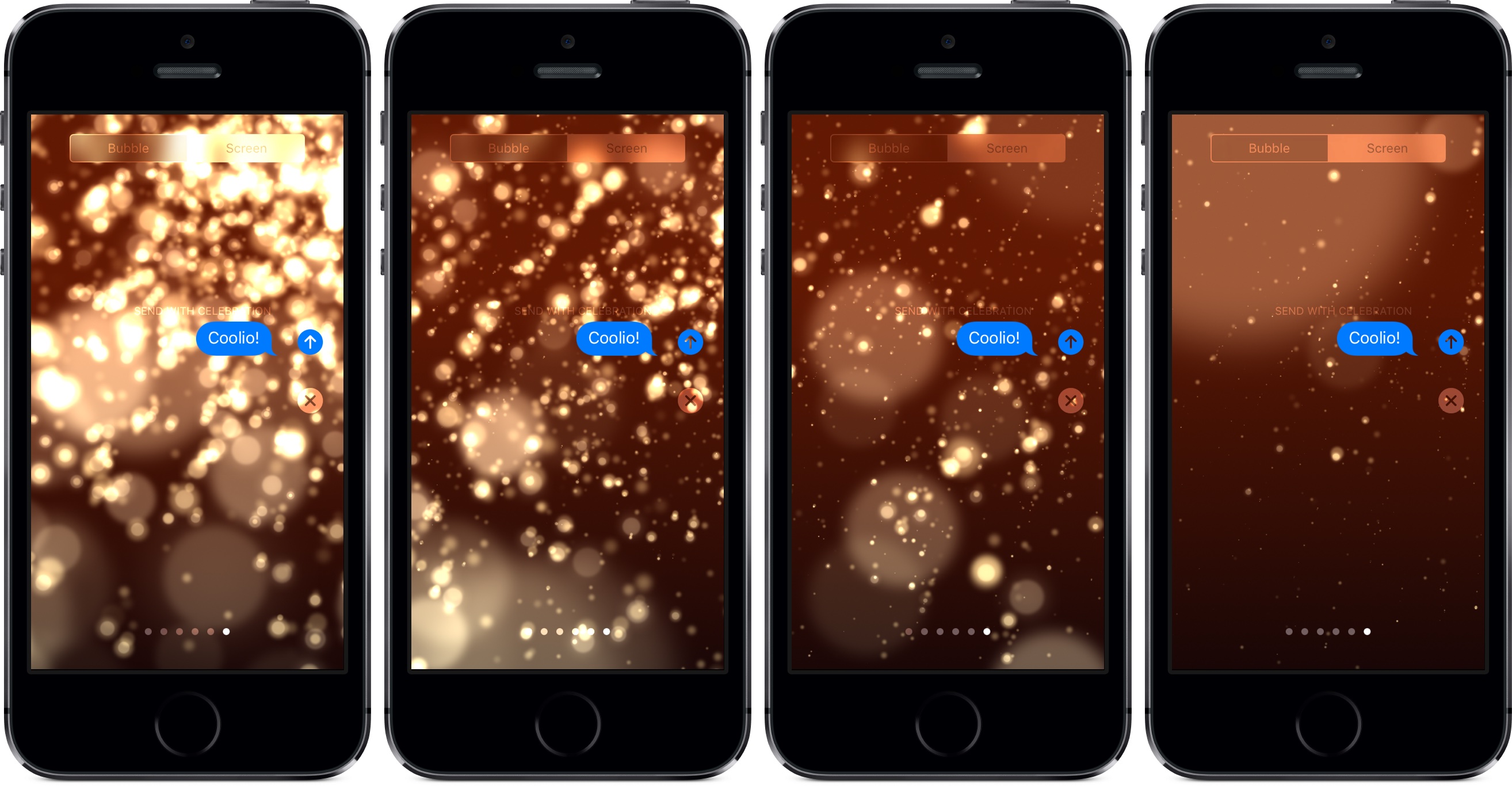 If Reduced Motion has been turned on in Settings → General → Accessibility → Reduce Motion, be sure to slide the Auto-play Messages Effects switch to the ON position, as described in our how-to. 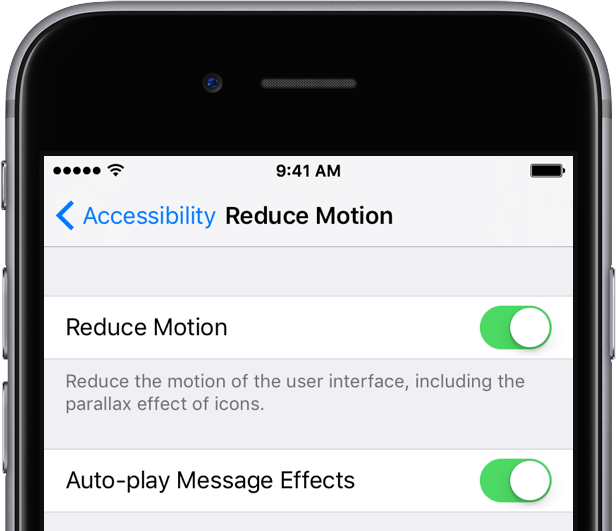 This will ensure that Messages will play bubble and screen effects and other animations even when Reduce Motion is on. iOS 10.1 or later is required for the Auto-play Messages Effects feature. 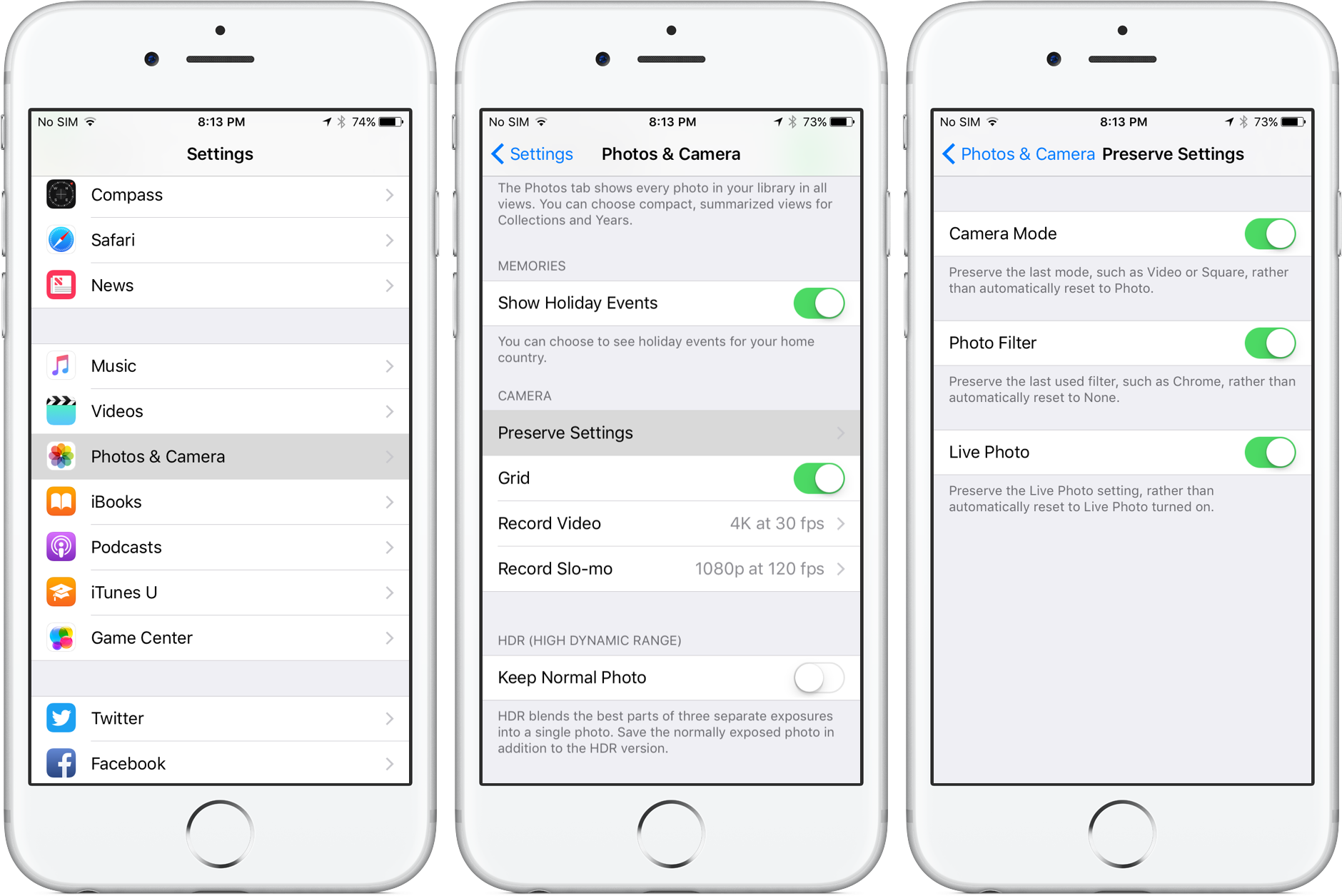 Enabling Camera Mode will preserve the last shooting mode, such as Video, Square, Portrait and more, rather than always launch Camera in Photo mode.

When Photo Filter is on, your device will remember the last used filter rather than automatically reset to None every time you use filters in the Camera app. 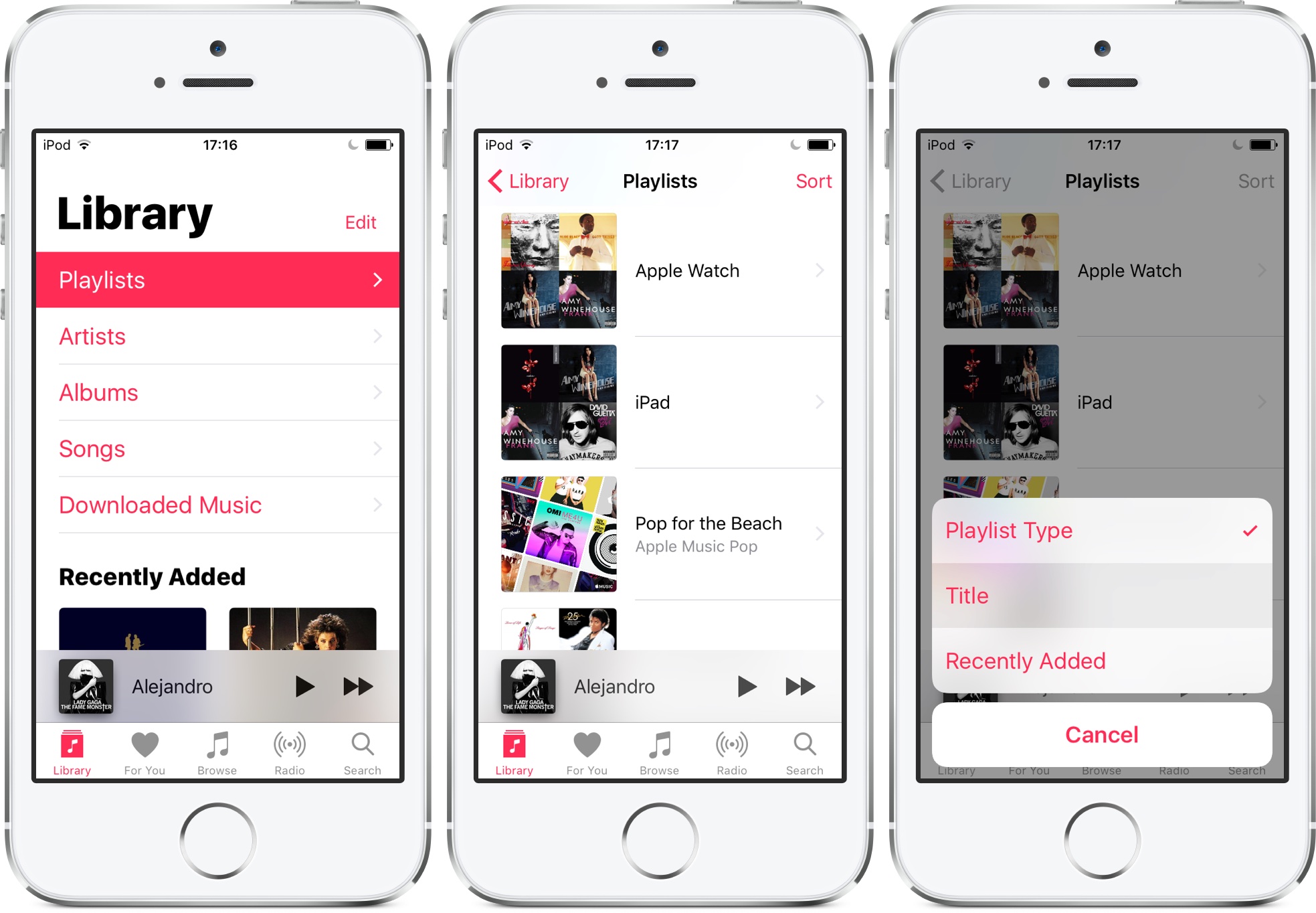 As for your songs and albums, you can now sort them by Title or Artist. 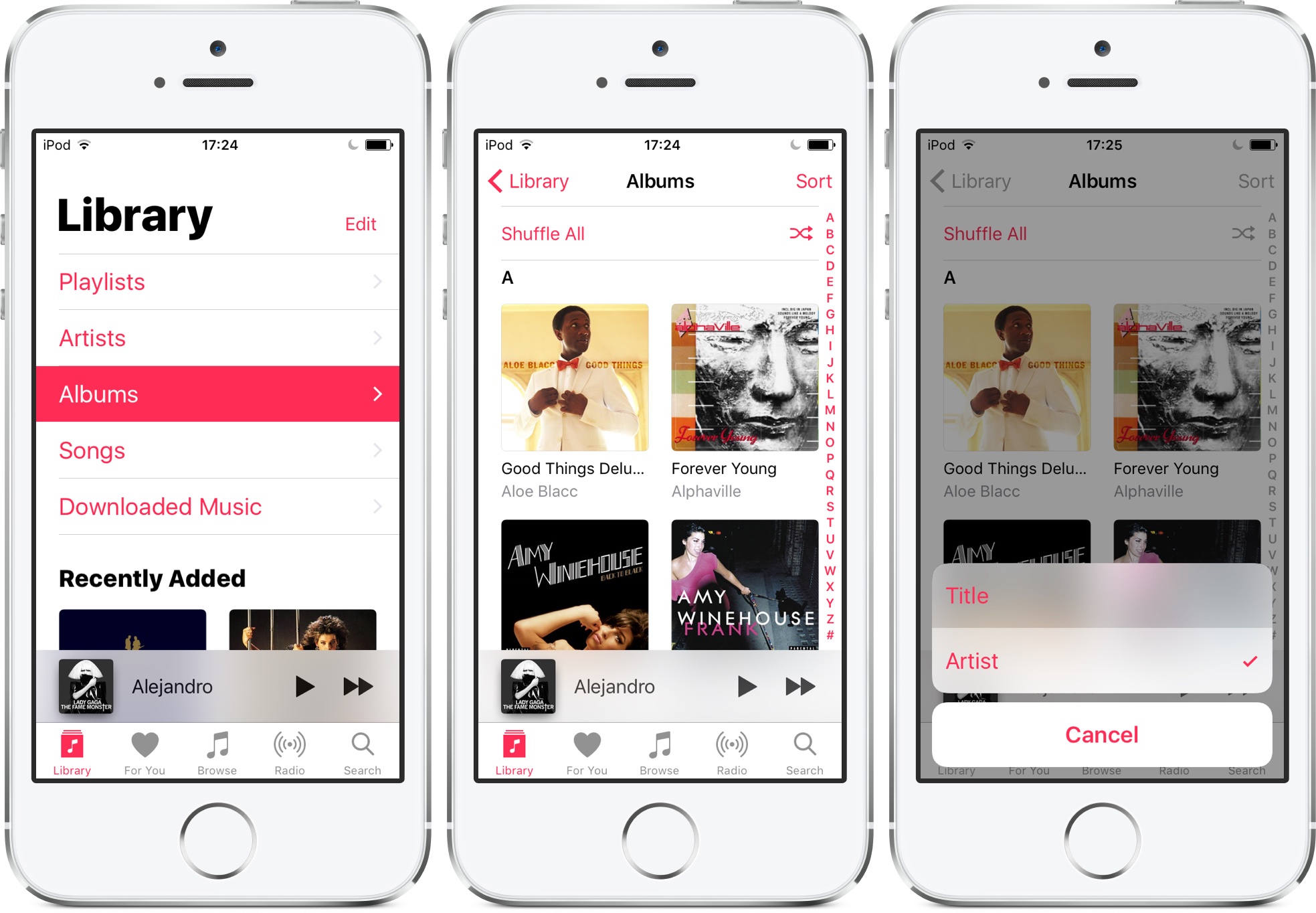 To sort albums, tap Library → Albums, then tap Sort in the upper right and choose Title or Album as your preferred sorting mode. 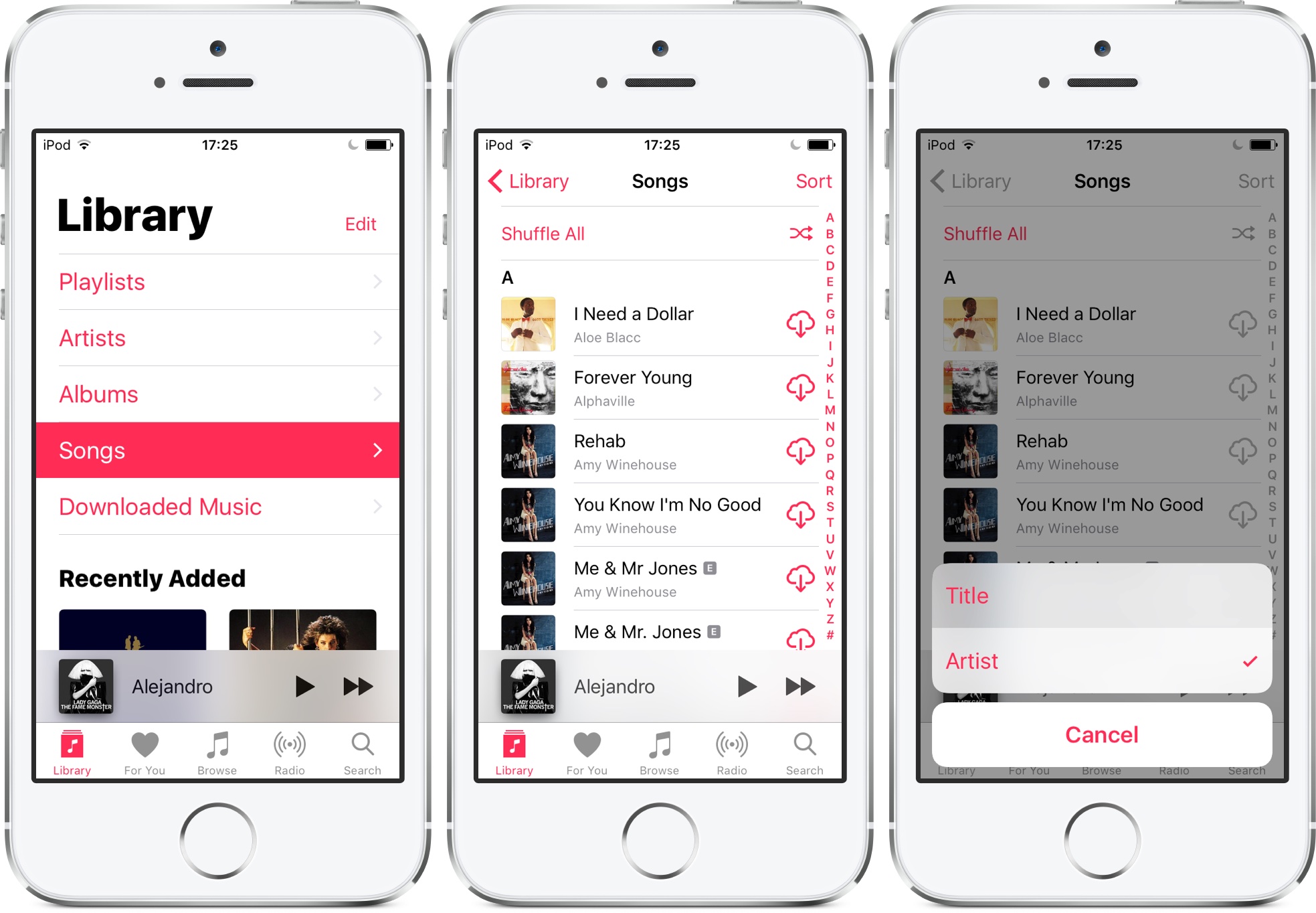 To sort songs, tap Library → Songs, then tap Sort in the upper right and choose Title or Album as your preferred sorting mode.

If you’re subscribed to Apple Music and have been wondering if Apple will bring back the beloved star rating system, you’ll be happy to learn that iOS 10.2 beta 1 now lets you rate songs on a scale of 1-5.

Go to Settings → Music and slide a new switch labeled Show Star Ratings to the ON position. This will ensure that your star ratings get remembered and synchronized with your other devices via iCloud. 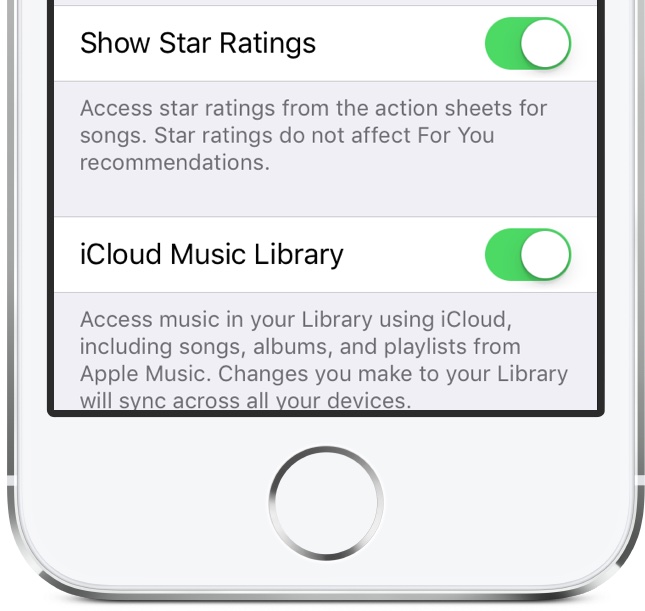 Song-starring  is very convenient if you want to create Smart Playlists in iTunes that automatically update with, say, your three-star songs, just the best five-star tracks and so forth. Star ratings are found in the action sheets for songs: simply choose Rate Song at the menu’s bottom to select your star rating.

Don’t forget to tap Done to save the changes. 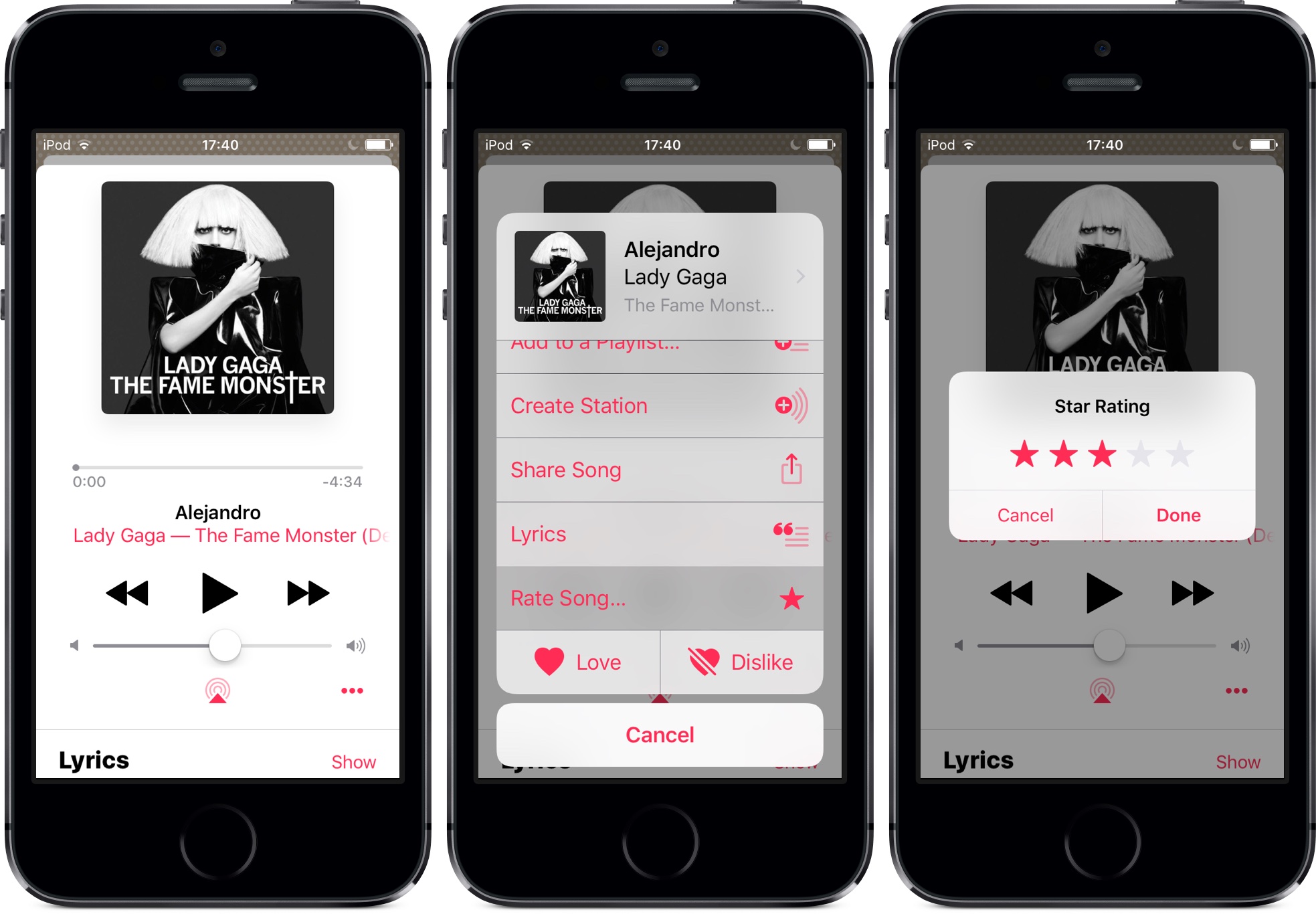 On devices with 3D Touch, you can simply press an item that you previously added to your library to access the star rating feature faster. Apple has acknowledged that star ratings do not affect For You recommendations. Star ratings for your music in iOS 10.2 beta 1 are in addition to the existing Love/Dislike system in the Music app.

Videos app gains its own widget

iOS 10.0 provides widgets for most of the stock apps, sans the stock Videos app.

iOS 10.2 beta rectifies that omission by implementing a brand new Videos widget which displays your downloaded movies and TV shows. Tapping any video on the widget starts the playback inside the Videos app. Any content not downloaded to the device via the Videos app won’t be displayed on the widget.

To add the widget to the Notification Center and Lock/Home screen 0, pull down on any Home screen and swipe right to get to the widgets, then tap Edit at the screen bottom.

Now tap the plus sign next to Videos underneath the More Widgets heading to add the Videos widget to your currently active widgets listed at the top of the interface. Optionally, grab Videos by its handle and drag it to a desired position. Tap Done to save the changes.

On devices with 3D Touch, add the widget faster by pressing the Videos icon on the Home screen. Now tap the Add option in the upper right corner of the Videos widget inside the 3D Touch shortcuts menu.

Press and Hold to Speak settings

You’ll find a new “Press and Hold to Speak” feature under your Home button Accessibility settings. Tap Settings → General → Accessibility → Home Button and choose how you want your iPhone, iPad or iPod touch to respond when the Home button is pressed and held. 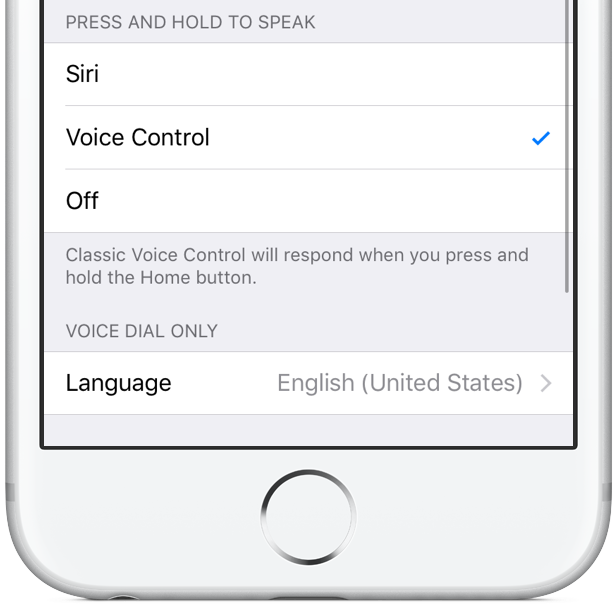 You have three options available underneath the Press and Hold to Speak heading:

Keep in mind that choosing Voice Control will turn Siri off in Settings. 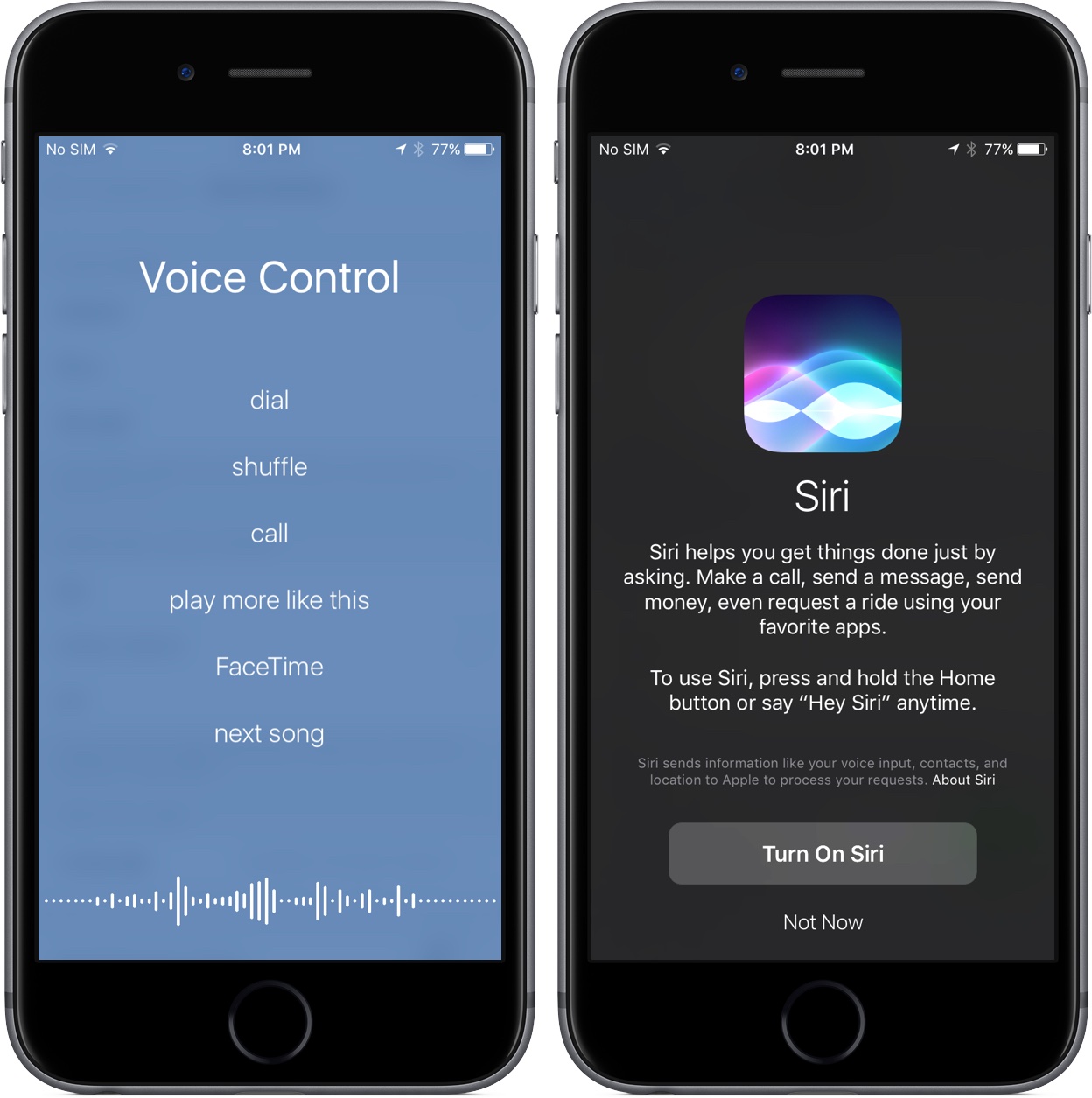 If Voice Control was selected before changing Press and Hold to Speak settings to Siri, a prompt will go up asking if you’d like iOS 10 to enable Siri on your behalf.

After installing iOS 10.2 beta 1 to an iPhone paired with your Apple Watch, launch the Health app and hit the Medical ID tab at the bottom to see a message informing you that your emergency contacts will be notified as soon as you have used the life-saving Emergency SOS feature on your Apple Watch. 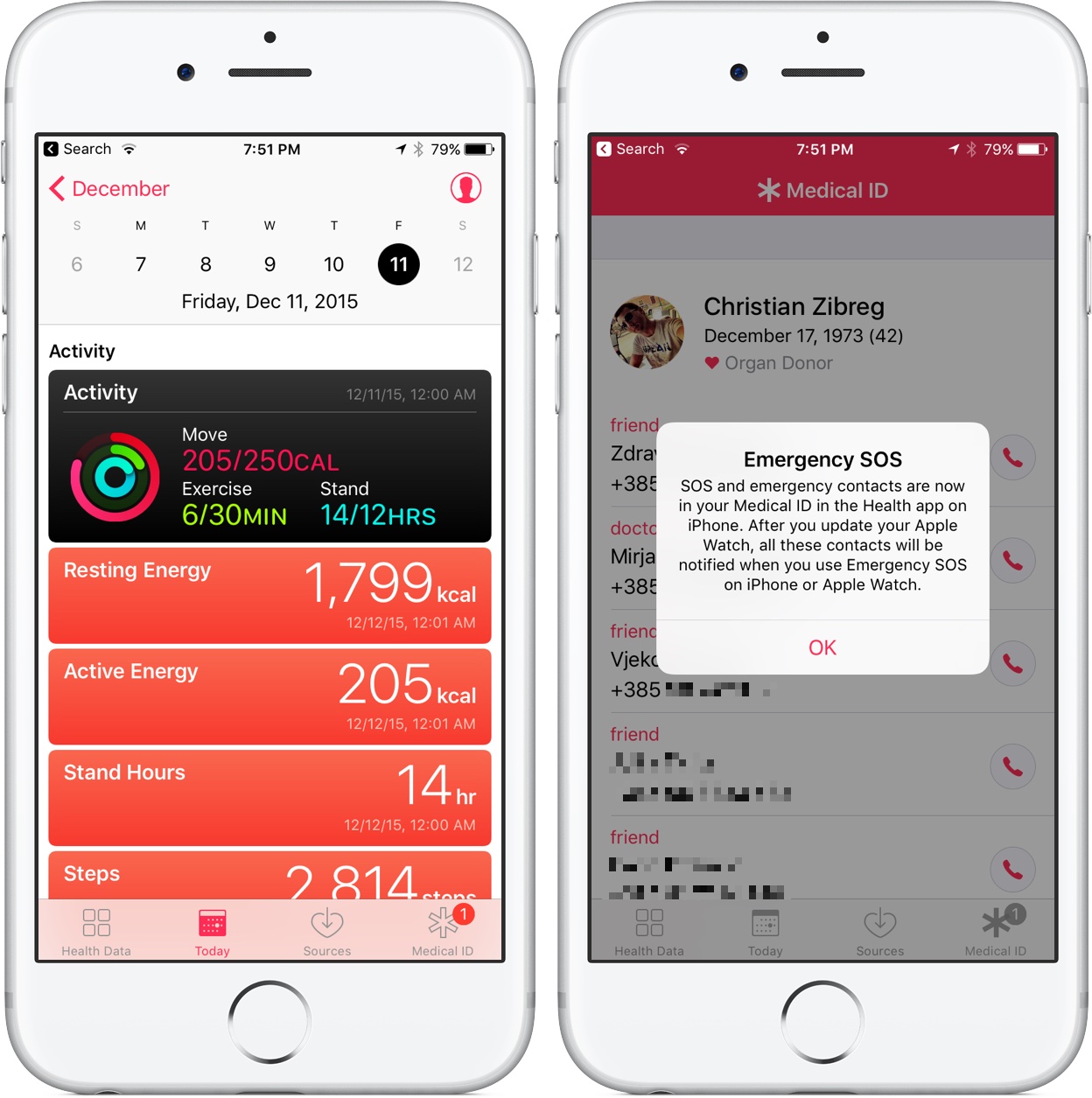 “SOS and emergency contacts are now in your Medical ID in the Health app on iPhone. After you update your Apple Watch, all these contacts will be notified when you use Emergency SOS on iPhone or Apple Watch,“ reads the message.

iOS 10.0 has brought out revamped device icons in the AirPlay menus that are accessible throughout iOS, including via Control Center, in the Music app, iOS media player and elsewhere in the system.

In iOS 10.2 beta 1, there’s now a cool new headphone icon which appears in the iOS status bar when a Bluetooth audio device has been paired with your iOS device. This icon showed up for owners of the new Beats Solo3 headphones with the Apple W1 chip a few days ago.

Aside from the new features, iOS 10.2 beta 1 includes under-the-hood improvements that make your mobile experience more enjoyable and less buggy. For example, animations throughout the system have been sped up and run smoother than before.

I own an iPhone 7 Plus and iOS 10.0 and iOS 10.1 were prone to the frame-dropping issue. Pretty much all system animations used to stutter on prior iOS 10 releases, like the Home screen zooming animation, the slide-to-unlock animation, scrolling through lists and more.

Having updated my phone to iOS 10.2 beta 1, I immediately noticed that graphics performance has improved and many of the previously jerky animations now either run smoothly or drop fewer frames. Still, lots of work remains to be done before the iOS user interface will run at 60 frames per second.

If your device has 3D Touch, you’ll also notice subtle differences in the shortcuts menu transparency.

And last but not least, deselecting the Show Contact Photos option in Settings → Messages will now also remove profile pics from the chat heading at the top of the screen. Previously, contact photos were removed from the conversation list only.

Wrapping up, iOS 10.2 is shaping to be another major update following the release of iOS 10.1 with Portrait mode and a couple other improvements. With nearly a dozen new features and enhancements, iOS 10.2 should smooth out a few rough edges and improve experience for everyone.

What’s your favorite feature in iOS 10.2 beta 1 so far, and why? While we’re at it, what would you improve about iOS if you were Apple?

Share your observations with fellow readers in the comment section below and don’t forget you can influence our coverage and request specific articles via tips@iDownloadBlog.com.