Do Not Disturb (DND) is a handy feature that lets you keep yourself from being notified when you want some quiet, peaceful time. It does so by silencing all call, text, and app notifications on your iPhone or iPad.

However, there are times when you want peace from all apps and notifications but don’t mind getting call or text notifications from a select few people.

In this tutorial, we show you how to exclude certain contacts from the Do Not Disturb feature in iOS. After that, you will get their calls even during times your iPhone is in Do Not Disturb Focus mode. 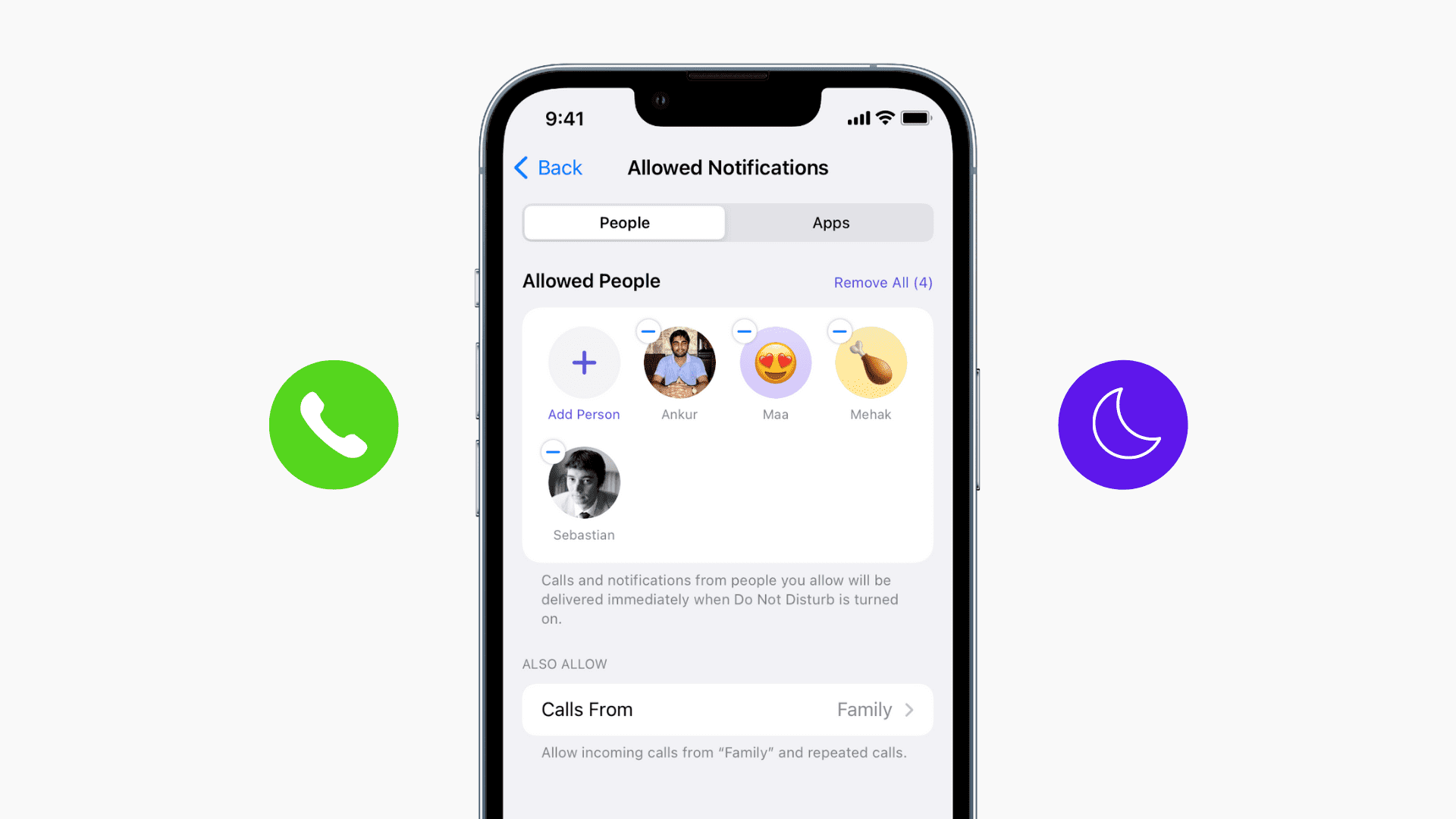 When to exclude certain people?

Do Not Disturb is an invaluable tool if you’re getting bugged about work from co-workers or apps keep notifying you off the hook when it’s supposed to be a romantic weekend or an enjoyable vacation. The only problem is that Do Not Disturb does not discriminate, and that means it blocks everyone and everything.

This means that even when you’re on vacation with someone, you’re not going to get their notifications either.

For example, suppose you’re at a hotel with your significant other, and they have to run out to get something from the store. In that case, you won’t get any notifications from them when Do Not Disturb is turned on, and you’ll miss everything they’re trying to say all because you’re trying to keep the other noise out of your life.

Those incoming phone calls you can expect to get about, “Which food item should I get,” and “Did you remember our reservation?” will go unanswered, and soon, you’ll be facing an upset significant other.

Similarly, suppose you enable DND while working. But even then, you may not want to miss calls from your kids, parents, or spouse.

There are many other situations, so you’ll just have to use your imagination for this stuff.

Here’s how you can turn on Do Not Disturb and only get call notifications from people that you care about.

How to exclude certain people from Do Not Disturb

Starting with iOS 15, Apple clubbed Do Not Disturb settings inside the new Focus feature.

Now, there are three main ways to exclude people from Do Not Disturb:

The first option is the quickest if you only want to exclude a few specific people from DND. Go straight to the steps below.

In case you wish to proceed with option two, make sure you have added the desired contacts as favorites inside the iPhone contact app. For that, open the Contacts app or the Phone app and tap Contacts. Next, tap the person’s name and then tap Add to Favorites.

If you want to exclude certain groups from DND, first create a contact group on iCloud, your iPhone, or your Mac before moving to the steps below.

Here’s how to exclude certain people from Do Not Disturb on iPhone: 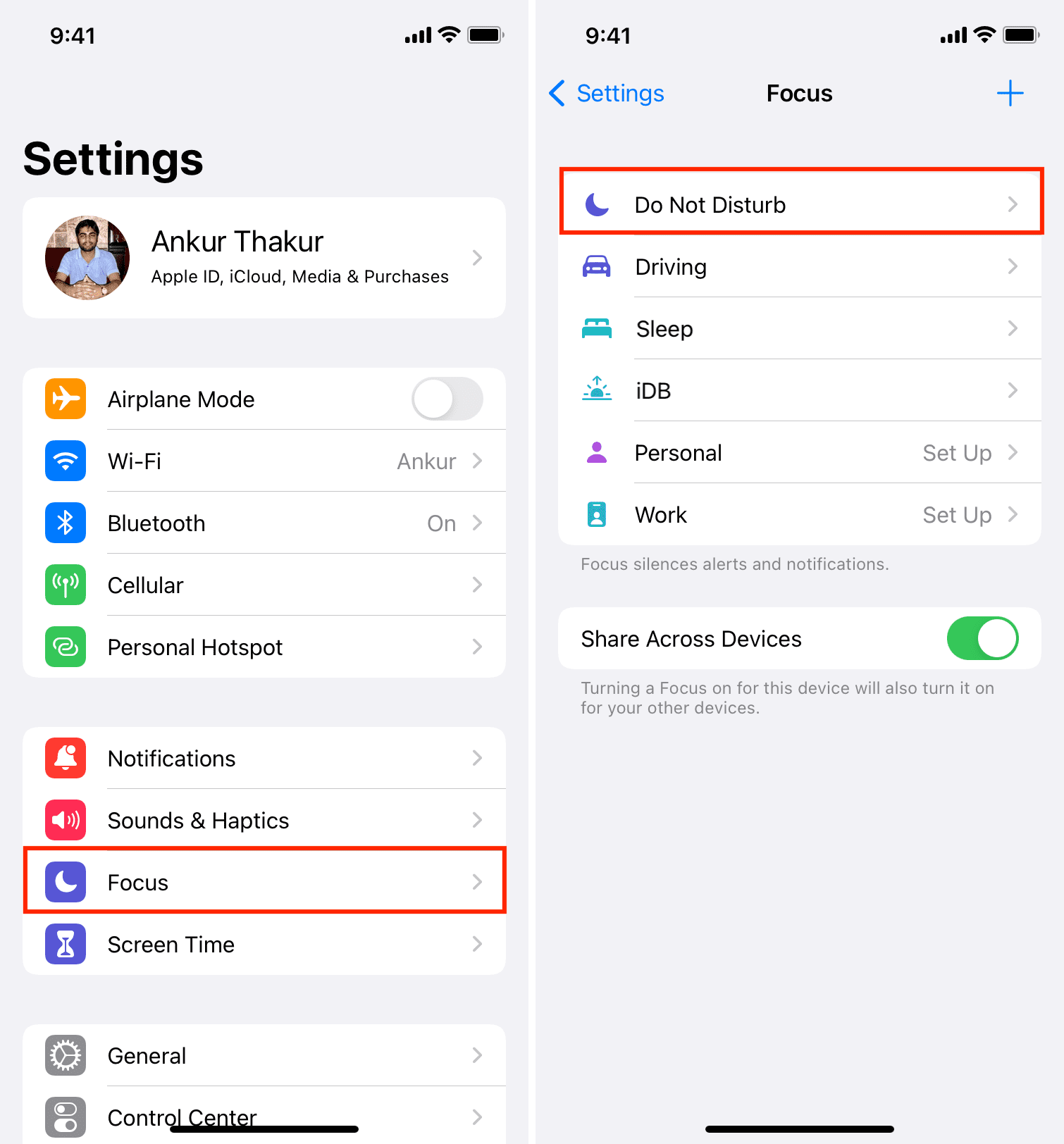 4) Tap Add Person, select the few people you want to exclude from DND, and tap Done. 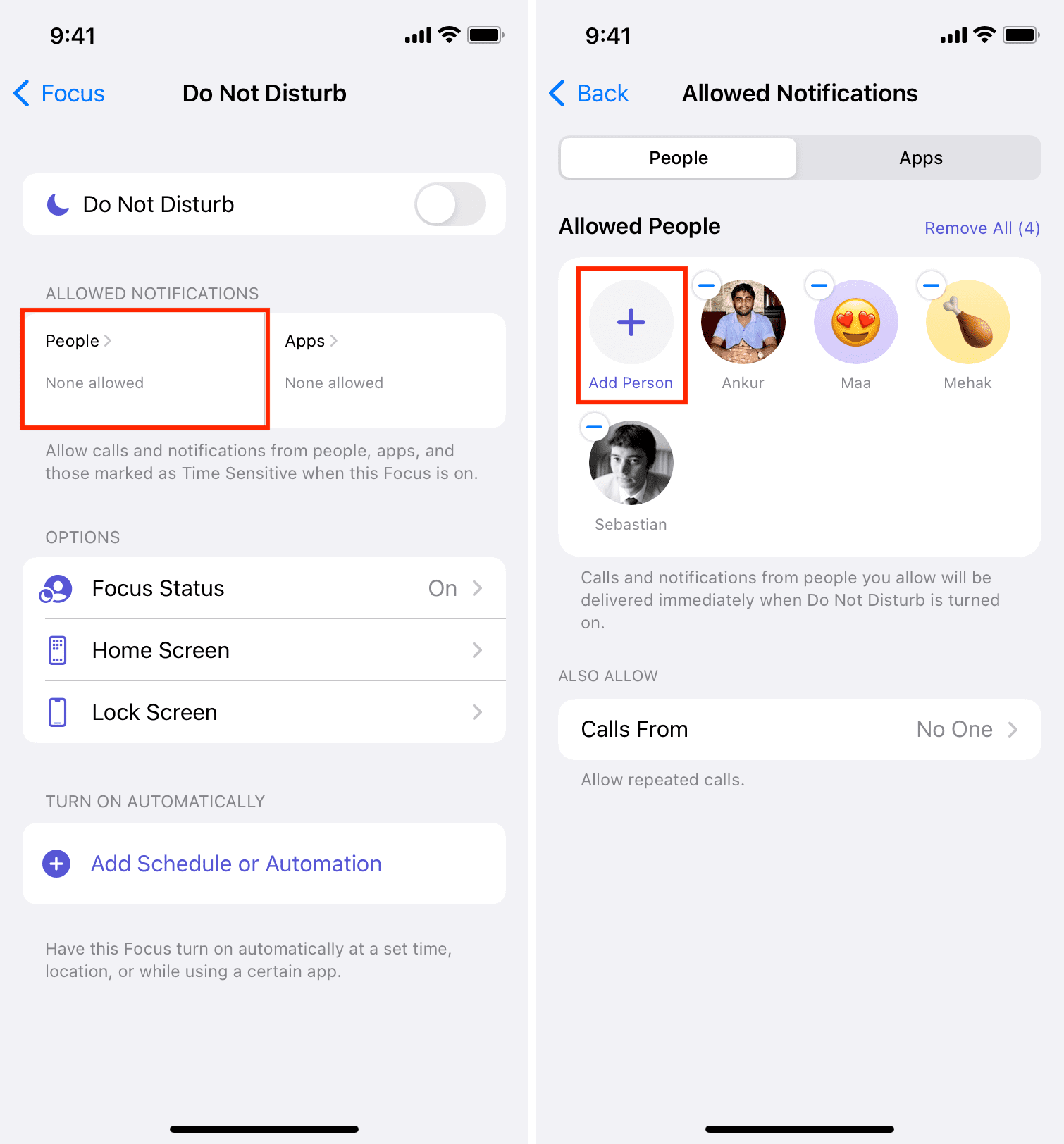 From now, even when your iPhone is in Do Not Disturb mode, you will get calls and texts from these people.

Alternatively, in step 4, you can tap Calls From and choose Favorites, All Contacts, or tap Groups and choose one. You will only see the Groups option if you have created a contacts group. 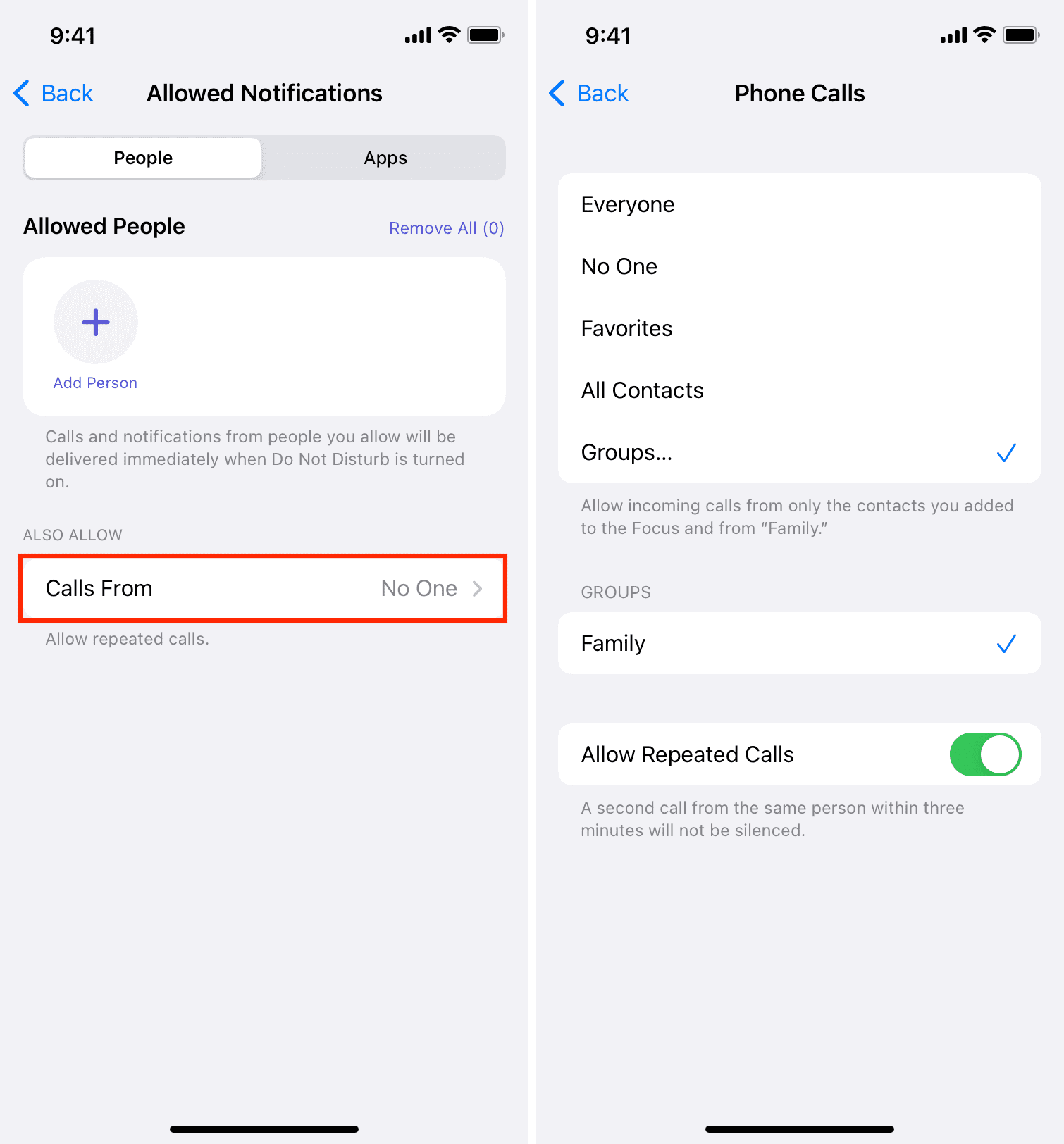 Because Do Not Disturb is such a great feature, we believe in being able to use it for your convenience. But for those particular situations where you want to let certain people through, we hope you found this tutorial valuable.

If you ever want to remove someone from the list of allowed people, follow the same steps and tap the minus button next to their name.

You have to enable Emergency Bypass for calls (Phone and FaceTime) and text messages (iMessage and SMS) separately. This gives you the flexibility to allow all, just calls, or just messages.

Here’s how to turn on Emergency Bypass for a person on iPhone:

1) Open the Contacts app or open Phone and tap Contacts.

2) Tap the name of the desired person.

4) Scroll down, and depending on your preference, tap Ringtone or Text Tone. You can also do both one by one. 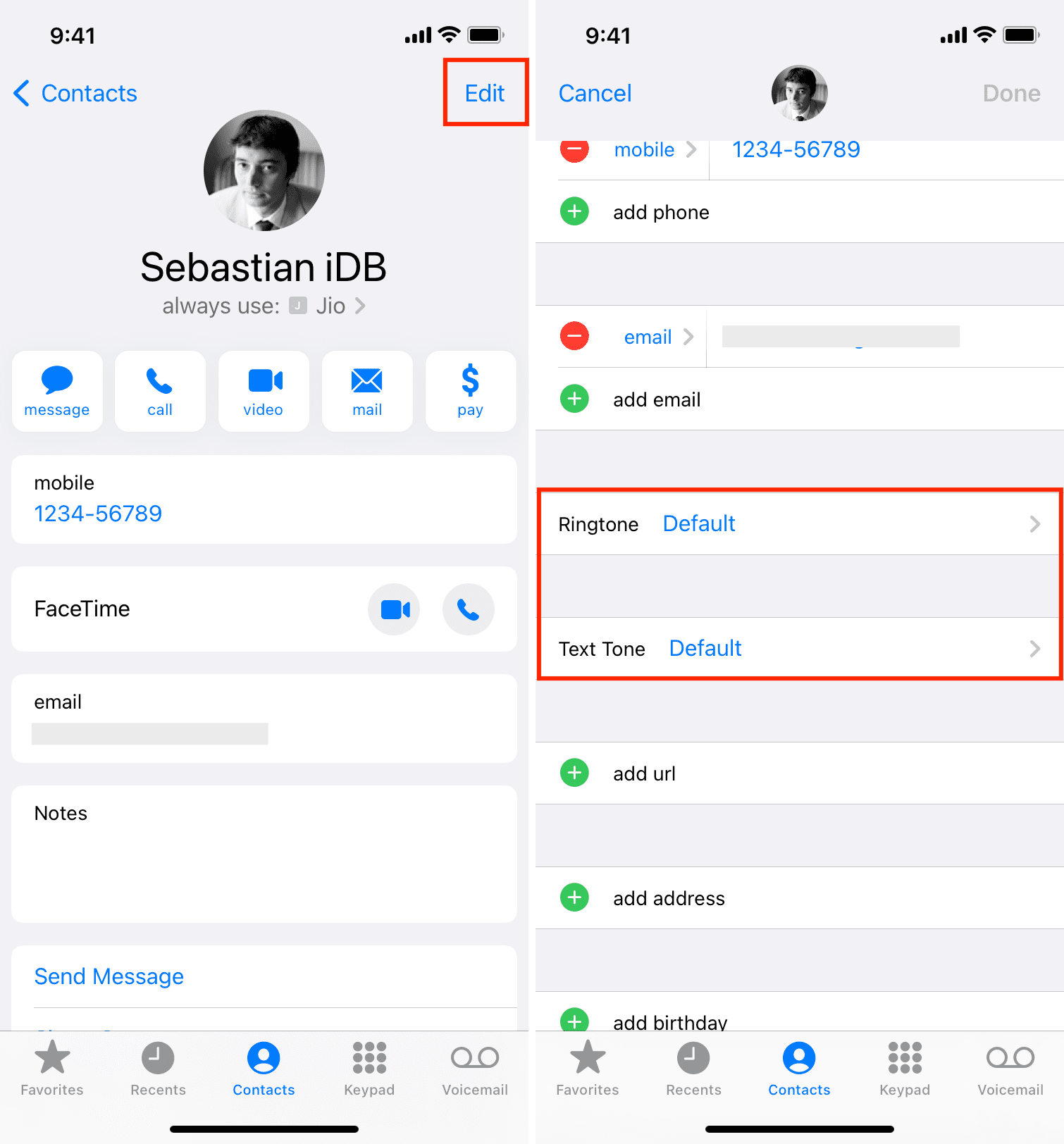 5) From the top of the screen, enable Emergency Bypass and tap Done. After you enable the feature for calls, texts, or both, you can see that it’s turned on, and shows the same on that contact’s main page. 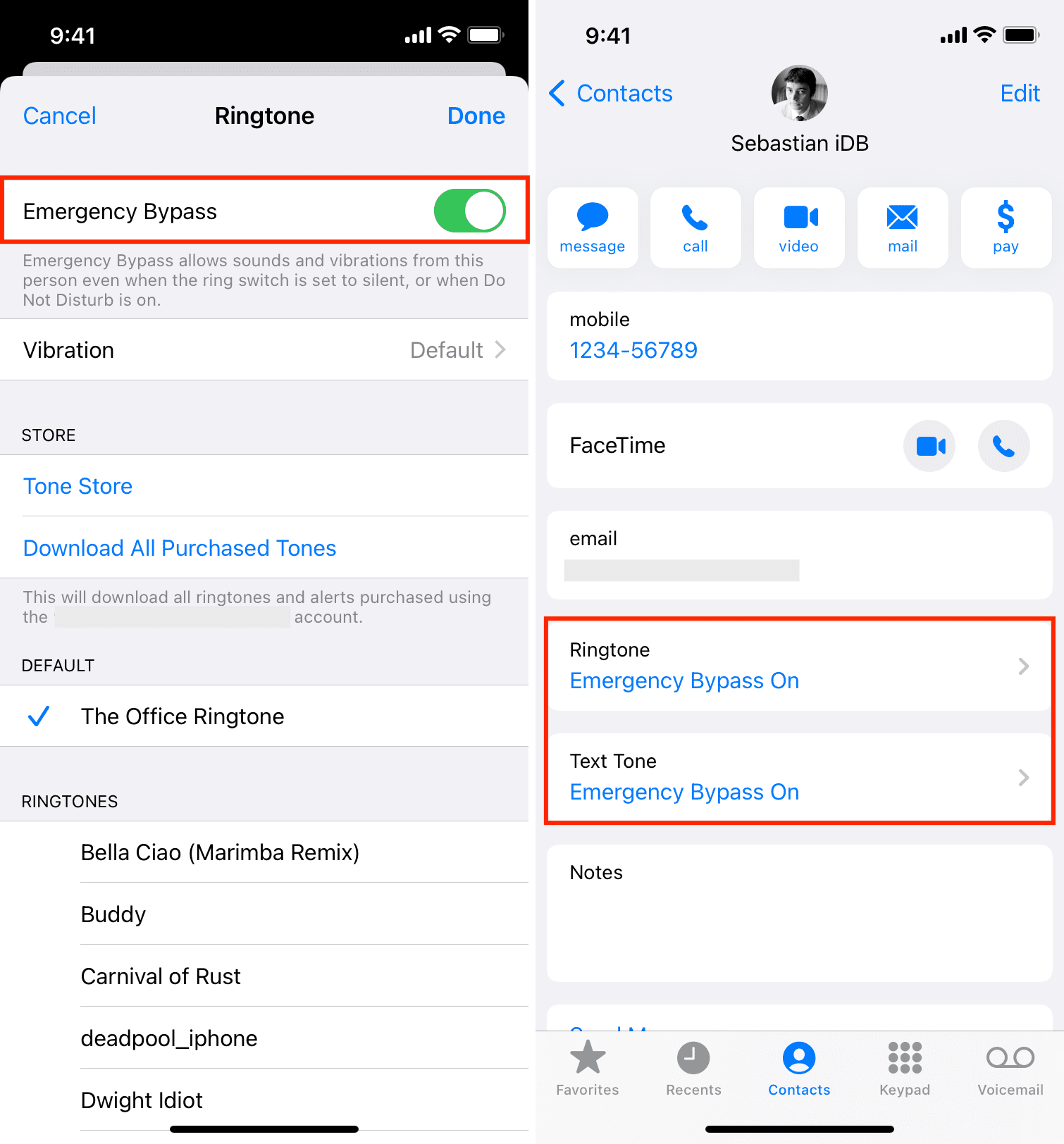 From now, you will hear the ringtone for all calls and texts from this person even if your iPhone is in DND mode or silent mode.

I should once again remind you that you can be sitting in a meeting with your iPhone in silent or DND mode, but if that person calls or texts, it will bypass these modes and alert you! So, make sure you do this sparingly and only for one or two important contacts.