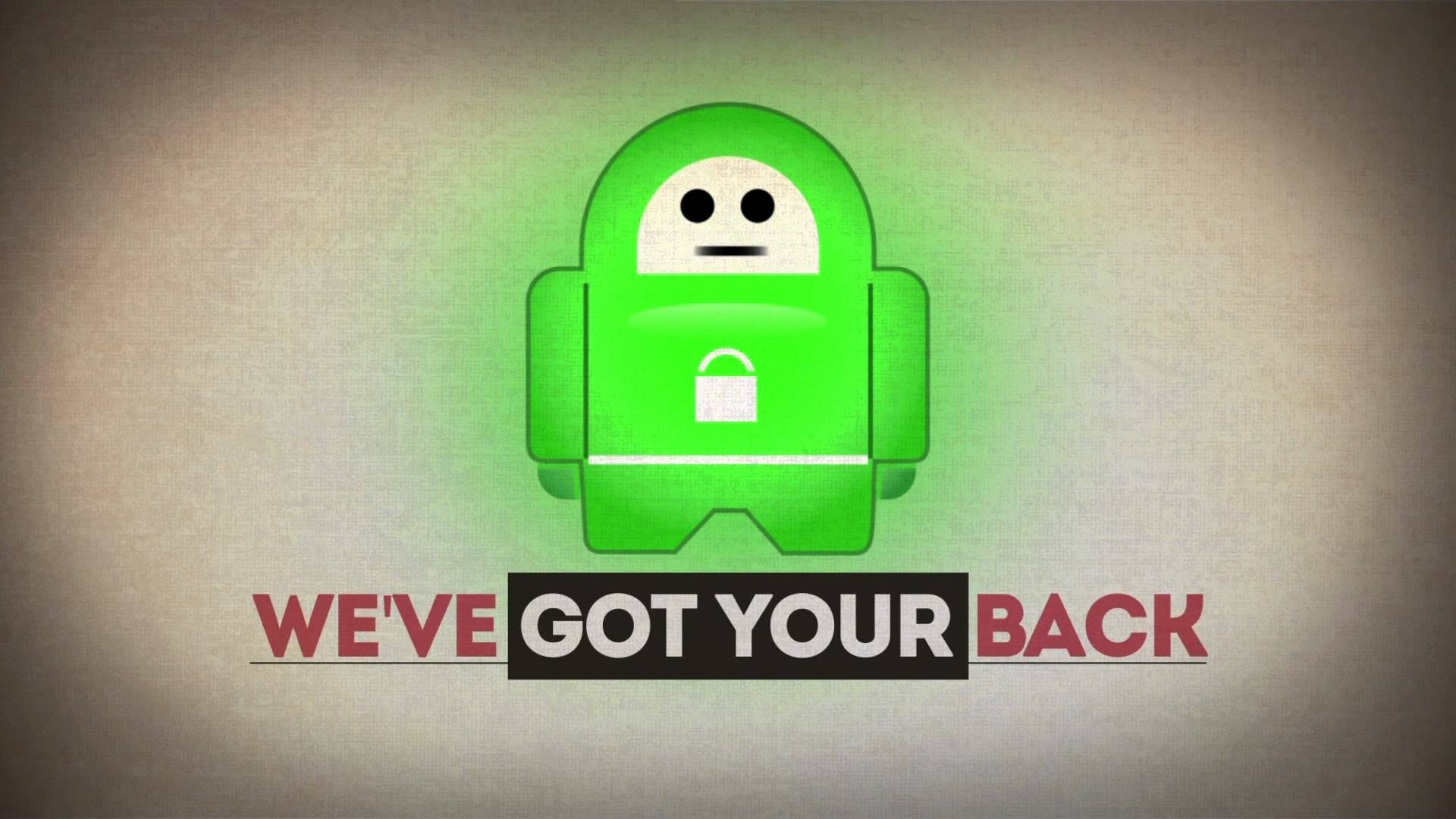 The quest for internet privacy and security is no game these days; hackers with malicious intent are really out there and they want your valuable personal information.

One way to protect yourself is with a virtual private network (VPN), but there are lots of VPN options out there to choose from – both free and paid. Picking a VPN that’s right for you can be tough, and many people are concerned about their privacy while online.

In this piece, we’ll be giving you our opinion on the Private Internet Access VPN; a paid VPN service that holds a solid reputation among its many users.

Private Internet Access – do you get what you pay for?

For as low as $2.91 per month, if you sign up for a one-year subscription, Private Internet Access offers five main features with its VPN service:

For that price, the feature set seems like it’s a fair deal, but what about speed, reliability, and cross-platform support? – You’ll be happy to know that Private Internet Access promises ‘unlimited bandwidth,’ no data caps imposed each month, reliability as a VPN service, and also the service provides apps for popular platforms like OS X, iOS, Windows, and more.

Other price points are also available if you don’t want to be a long-term subscriber, such as $6.95 per month, or $3.33 per month for one year, or even $2.91 per months for two years. Obviously, the two-year subscription for $2.91 per month gives you the most bang for your buck, and it’s the subscription we would recommend.

Does the VPN throttle data speeds?

I have Verizon FiOS Quantum at home, and I pay for 50 megabits per second of both download and upload speeds; I take my bandwidth very seriously.

With that being said, one of the things I’ve always hated about many of the free VPNs I’ve used is how they throttle my speeds to anywhere between 1/10 or 1/2 of my expected speeds. I’ve tried VPNs that only allowed 1-5 megabits of download and upload speed per device, and that was a headache for me after getting used to fiber optic internet.

With Private Internet Access, I decided to try a few tests, and what I found was that my download speeds were mostly unchanged before and after toggling the VPN on. The upload speeds, on the other hand, were slightly impacted, but not enough that I would complain.

Before VPN is turned on:

After VPN is turned on:

Will I gripe about the lowered upload speeds? – Probably not. More than likely, the speed difference is a limitation of the VPN server and isn’t a throttle imposed by the service.

Even 43-45 megabits per second is pretty darn fast, and it’s rare that I ever upload anything huge to the internet. I mostly use the internet for consuming content, such as videos, social media, forums, and writing here on iDownloadBlog. To me, the slight upload speed trade-off is a fair one for security and privacy, and it’s nice that the download speed is mostly unchanged.

Does the VPN encrypt connections?

Another thing people want when they sign up for a VPN service is to know they’re getting encryption that keeps hackers from intercepting data and decoding it to make sense of sensitive information. Private Internet Access is no slouch in this department – users get a wide array of encryption options.

When connecting to public Wi-Fi hotspots, such as those at McDonald’s or the local coffee joint, you’ll want encryption. Without it, your personal information is very easy to snoop on. Private Internet Access lets you manually configure the level of encryption you want, whether it’s AES-128, AES-256, Blowfish, or none.

Different encryption levels are available because the more secure the connection is, the longer it may take to decode that information. For that reason, you should select an encryption option that is efficient in speed, but still rather protective enough that you’re going to feel safe using the internet in public locations. The default AES-128 option is a relatively safe option, but AES-256 is more secure.

It’s also worth mentioning that Private Internet Access offers IPSec/L2TP, PPTP and SOCKS5 technologies as a part of the package deal, so you’re getting security and privacy all in one deal.

Are there any limitations?

As we noted earlier, the Private Internet Access VPN doesn’t appear to throttle your speeds, but there are other kinds of limitations that VPN providers are known to impose, such as the amount of devices you can use and the amount of data you can consume every month.

Fortunately for Private Internet Access users, you have unlimited data to blow through every month. You can download and upload to your heart’s content while using the VPN and you’ll never get a message saying you’ve used too much data or get throttled in terms of data speeds.

Additionally, you can have up to 5 devices on one Private Internet Access account, which should be more than enough for your personal computer(s) and mobile device(s). Many VPNs limit this even further to where you’d have to pay separately for each device, but that’s not a problem with Private Internet Access.

In terms of the platforms that are supported, Private Internet Access offers an app you can download on iOS, Android, Mac OS X, Windows, and even Linux.

Reliability is a huge factor in VPN services, and Private Internet Access appears to have some pretty reliable service. I’ve not once had the VPN cut out on me while I was using it. On the other hand, the VPN doesn’t appear to like sitting idle for hours at a time on my iPhone and will auto-disable itself until I’ve re-enabled it myself.

Turning the VPN back on is relatively easy and once you’re re-connected, you’re good to go. Still, while I don’t really consider this a reliability issue, I think it’s one relatively annoying part of using the VPN on a day-by-day basis.

How private will the VPN make me?

Private Internet Access claims there will be absolutely no logging of your IP address of any kind on their servers. What this means is there will be no history on their end of you ever using their service. Without logs, the VPN service doesn’t know what websites you might be visiting.

Additionally, with the spoofing of your location, websites you visit won’t actually know who you are or where you’re accessing the internet from. With the VPN turned on, you could be in Florida like I am, but the IP address the website sees might say that you’re from Texas (or another location) instead. This is particularly helpful with forums, and other sites that log your IP address information.

With the layer of encryption security that you get, hackers who are trying to use packet sniffers to read into the data you’re sending back and forth over the internet will have a hard time decoding your precious internet session, so you’re pretty well protected. Usernames and passwords that you use to log in to your favorite sites will be encrypted too, so hackers can’t steal your log in information.

If you’re using a Mac, you’ll download the app and install it after signing up for your subscription from the Private Internet Access website and then you’ll launch it from your Applications folder or by searching for it from Spotlight.

Once open, you can access the VPN from your Menu Bar. Here, you’ll be able to select the server location you want to use, and then connect or disconnect on demand.

Additionally, you’ll find a “Settings” option where you can tinker with some of the VPN’s settings. We’ll show you a sneak peek below: 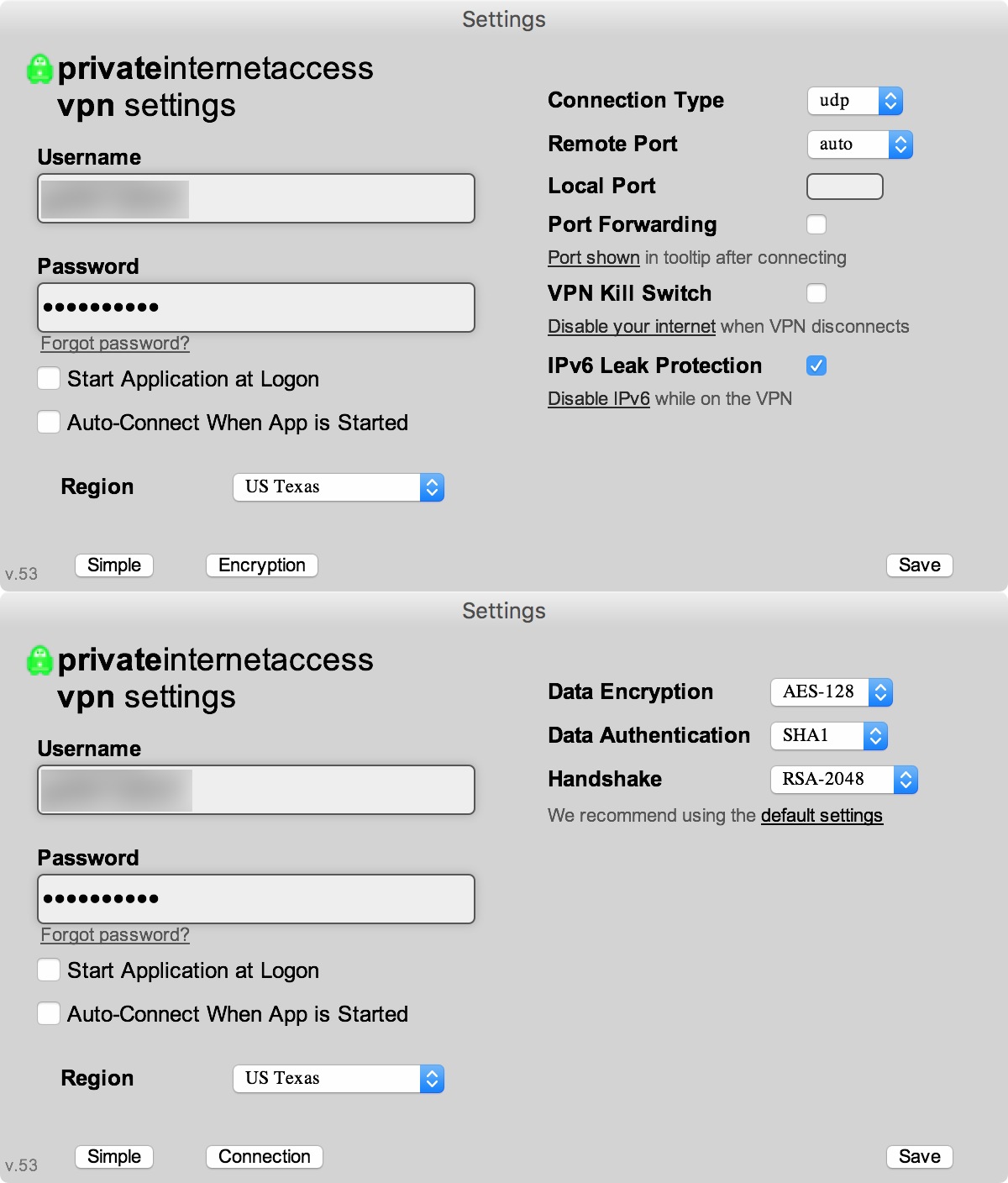 This is where you’ll log in with your account after being emailed the account details following your VPN subscription purchase. After signing in, there are a variety of settings you can configure to your liking, including:

Clicking on the “Save” button is required when you make changes so your settings are applied to the app.

When the Private Internet Access VPN is connected, the icon in the Menu Bar displays a check mark at the bottom right. When the VPN is not connected, no check mark is displayed on the VPN icon in your Menu Bar.

Using the VPN on your iPhone, iPod touch, or iPad is significantly dumbed-down for the mobile experience, but it’s still easy to use.

Once installed, you can launch the app and you’ll install the VPN profile on your device; afterwards, you’ll be able to turn the VPN on right from the app and you can even configure the region you want to use for your VPN connections. 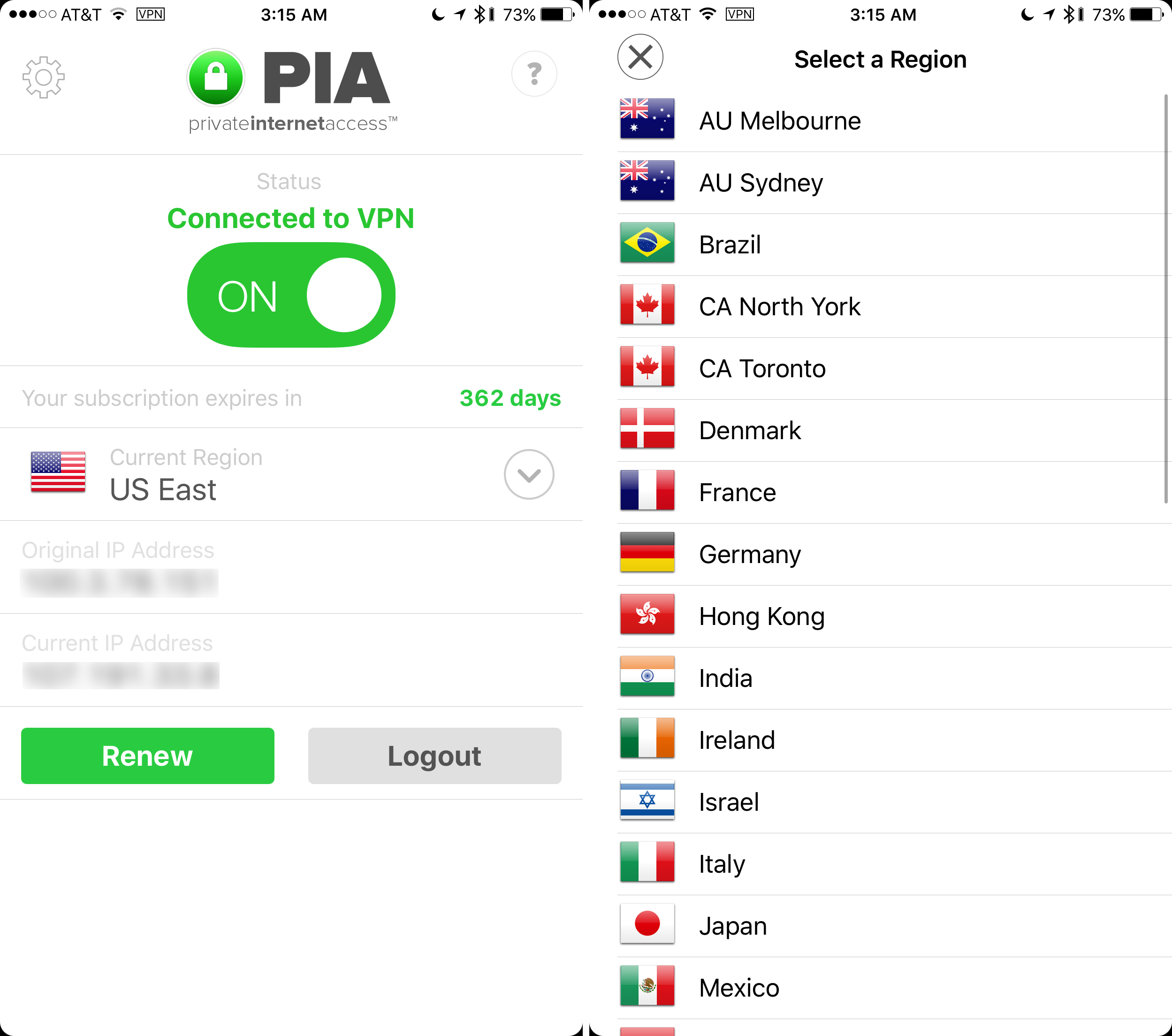 Alternatively, you can also launch the Settings app on your iPhone and the VPN toggle switch located under the Personal Hotspot cell will turn on your VPN too. 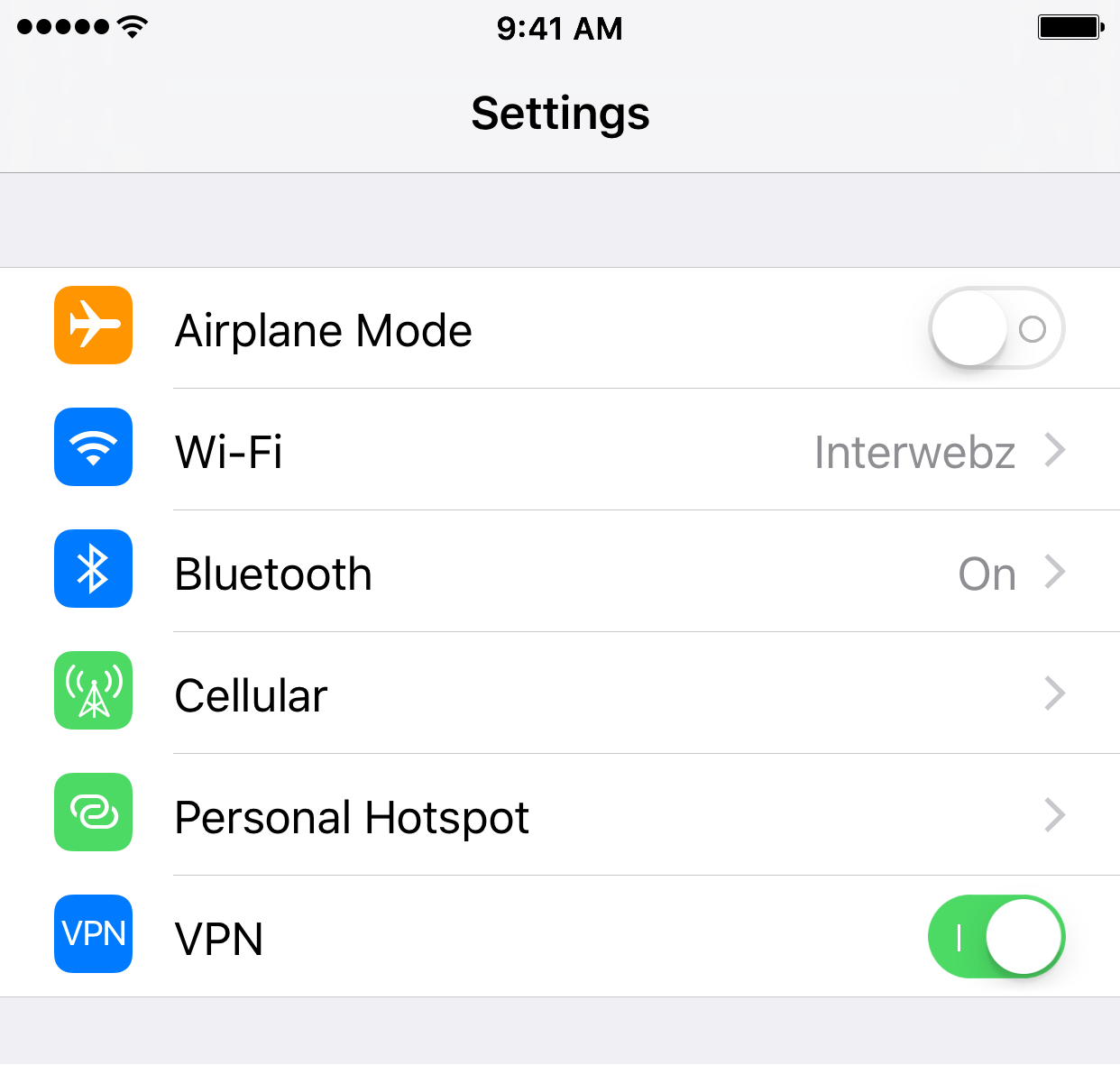 When the VPN is turned on on your iPhone, iPod touch, or iPad and successfully connects to a VPN server, a “VPN” icon should appear in your Status Bar to indicate the connection.

I think Private Internet Access has a wonderful price point for what you’re getting, and what makes it even cooler is you might not even have to pay with your hard-earned money to enjoy VPN access.

Another thing that I liked was that they offer a 7-day money-back guarantee, so if you don’t like what you purchased, you can always request a full refund. Since your privacy can be a big investment, it’s always nice to know that a company will stand behind their product if you’re not happy with it.

After having used the VPN for a while myself, I’m happy with the service and reliability of the VPN. The selection of servers and the additional layer of security help give me peace of mind anywhere I go. If anyone asked me what the best paid VPN service was, I couldn’t particularly say because I’ve tried very few; but, I’d definitely recommend Private Internet Access based on my current experience with it.

If you’re in need of a VPN to protect your privacy while surfing the web, I wouldn’t hesitate to give Private Internet Access a try. It’s a very good VPN service at an affordable price with your privacy being their main concern.

What are your thoughts on Private Internet Access? Do you already use a VPN service? Share in the comments!