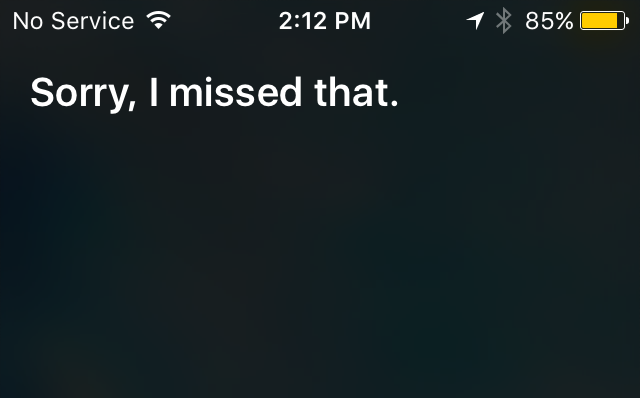 It’s happened many times to me before, and I can relate to those that it happens to – you’re trying to be quiet in the middle of class or in the middle of a meeting for work, and all of a sudden you hear a random noise and then Siri starts blabbering.

In this tutorial, we’ll show you how to solve this problem once and for all.

Why does this keep happening to me?

As it turns out, the Home button was pressed by accident, and now Siri is listening for your command, only to find that you have nothing to command because invoking her was an accident in the first place. And now, the whole room is staring at you like you have three heads, and to make matters worse, all the Android fanboys now know you have an iPhone.

Siri is designed to let you know when she’s unable to make sense of what you just said, either because the surrounding environment is too loud, or because the microphone could be malfunctioning, but if you invoke Siri with no intention of saying anything, then Siri is also going to have problems trying to listen for commands because no commands are being said.

This is why in the middle of a quiet room when Siri is invoked by accident, she’ll start running her mouth and telling you she didn’t quite get what you just said – simply because, she didn’t hear the command she was listening for.

How to fix this problem

I’ve seen this become a problem more for people who leave their phones out than for people who keep their phones in your pockets untouched, but when things land on the home button and invoke Siri, there’s little to do to keep Siri from launching short of disabling Siri altogether, but then you’ll still have to deal with Voice Control.

The best solution is to tune your Voice Feedback settings in iOS’ Siri settings so that Siri won’t be obnoxious. Here’s how you can do that: 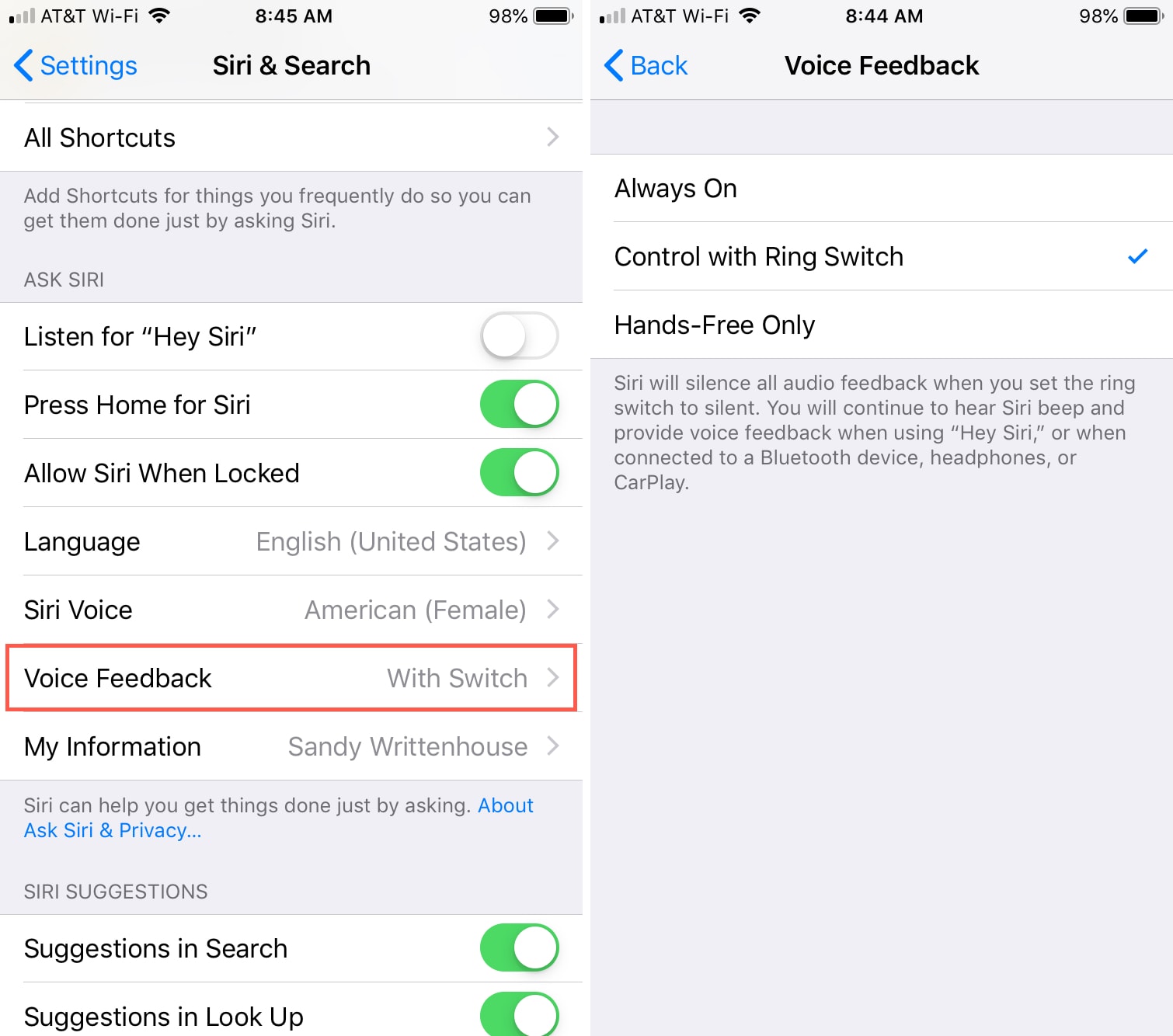 Step 2: Change the “Always On” setting to either “Control with Ring Switch” or “Hands-Free Only” to prevent Siri from speaking out at random when you’re trying to be quiet.

The “Control with Ring Switch” option makes it so Siri will give you feedback only when the ringer/silent switch is in ringer mode and will keep Siri silent when your ringer/silent switch is in silent mode. The “Hands-Free Only” option makes it so Siri only ever gives you this kind of feedback when you’ve got “Hey Siri” enabled, or when you’re connected to a Bluetooth device, headphones, or CarPlay.

The “Hands-Free Only” option is the more strict of the two, and is recommended for anyone that doesn’t want Siri making outbursts at all, but if you just want to ensure that Siri is quiet when your device is in silent mode, then the “Control with Ring Switch” is also a great way to tackle this problem so long as you remember to turn your iPhone into silent mode before class or meetings.

Another way to do this

There is another way to keep Siri from blabbering at random too, but it’s a little less preferred.

Assuming your iPhone is locked in class or in a meeting, and you’re not being rude and texting everybody or playing games, you can also prevent Siri from launching on the Lock screen altogether by simply disabling Siri on the Lock screen. This way, there’s no chance of Siri accidentally opening up on the Lock screen and creating a bunch of ruckus in what would have been a quiet environment.

This is also a very simple option to configure, and here’s how to do it: 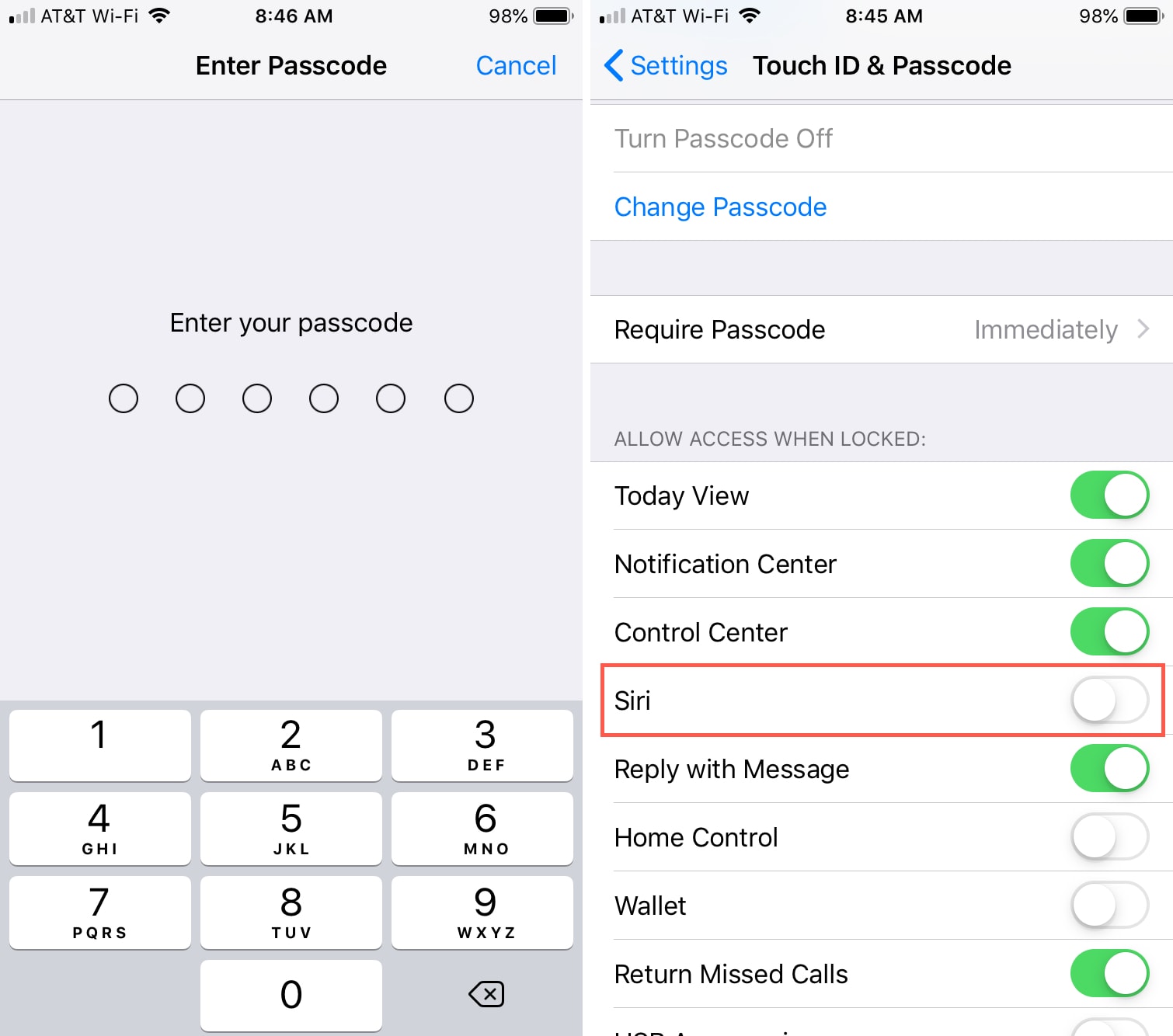 Step 3: Turn the “Siri” option off from the Passcode Lock preferences pane to disable Siri from the Lock screen.

Although Siri has now been disabled from the Lock screen, you can still access Siri from anywhere else on your iOS device because your voice assistant hasn’t been fully disabled.

This isn’t the preferred way to deal with the problem of Siri randomly making outbursts because now you’re actually limiting your functionality from the Lock screen, which is one of the shining features of Siri since it can save you the time of having to unlock your device and launch an app to find information, but with modern Touch ID fingerprint sensors, unlocking your device has never been faster, so this option probably isn’t a bad idea on the latest iOS devices and you’ll gain security from it too.

My thoughts on the problem

Although I hate limiting functionality that I feel is a natural feature of my iPhone or iPad, I also hate when Siri has to be a big mouth, and I’ve found that both of these alternatives to having Siri blabber on about not understanding me are good solutions to keeping myself inconspicuous when I was a college student or when I was in a meeting of some sort.

I can sympathize with those that have had Siri go off on them in class or in meetings, because in earlier iOS versions, the Siri invocation noise was so much louder and more recognizable, but Apple has made it so Siri only vibrates instead of making a loud noise. Unfortunately, she still says something out loud for everyone to hear if she can’t hear you, so the problem persists partially.

I’ve seen the problem happen time and time again, and just seeing the person’s face when it happens screams embarrassment. So save yourself the embarrassment and prepare your iPhone or iPad so it doesn’t turn all the attention from the teacher or presenter towards you.

With these two alternative options to keeping Siri quiet in different scenarios where you might accidentally bump and hold that Home button down, you should now be able to ensure you don’t draw unwanted attention to yourself.

If you found this guide helpful, leave us a comment below!