Siri is a personal assistant feature found on the iPhone, iPad and iPod touch, that allows you to use your voice to control your device. You can use Siri to send messages, emails, tweets, and more. You can also use Siri to get movie showtimes, sports scores and times, make dinner reservations, etc.

The great thing about Siri is that it doesn’t require you to look at your device’s screen in order to interface with it. And Siri is smart enough to consider your location along with the context of your commands and conversations. By doing so, Siri can respond intelligently to your requests.

Inside, we’ll teach you some of the history of Siri and show you some of its basic usage features. We’ll then present to you with an exhaustive list of voice commands, and discuss Siri’s dictation features. Check inside for all of the details…

Before being acquired by Apple, Siri was originally a third-party app created by Siri, Inc. The standalone Siri app, which was available for download on the App Store, allowed users to do some of the things that Siri is known for today. The standalone Siri app was short-lived and limited in functionality. Originally, Siri, Inc. intended for its software to appear on competing platforms like BlackBerry, but those plans were squashed upon being acquired by Apple.

We created a video walkthrough of the original Siri standalone app, which can be viewed below:

The Siri that we all know today first appeared as the iPhone 4S’ flagship feature, and launched as a part of iOS 5 on October 14, 2011. Since then, Siri has appeared on every other handheld iOS device, such as the iPad and iPod touch line.

To use Siri, you must have an iOS device with Siri installed. All post-4s iOS 7 devices have Siri installed. Invoking Siri is accomplished by pressing and holding the device’s Home button for about 1.5 seconds. After invoking Siri, you will hear a tone and see a screen that says “What can I help you with?” After that, begin speaking your command, and Siri will interface with you. You can also tap the small question mark button in the bottom left-hand corner of the Siri interface for a list of commands.

It’s no secret that Siri’s voice recognition software, which is powered by Nuance, leaves a bit to be desired at times. Fortunately, you can manually edit Siri queries by scrolling up and tapping on the query. Once you manually edit it, tap the Done key to resubmit the edited query.

If Siri doesn’t pronounce your name or the name of one of your contacts correctly, it’s a fairly easy problem to resolve. To start, invoke Siri, and say the name of the contact in question. 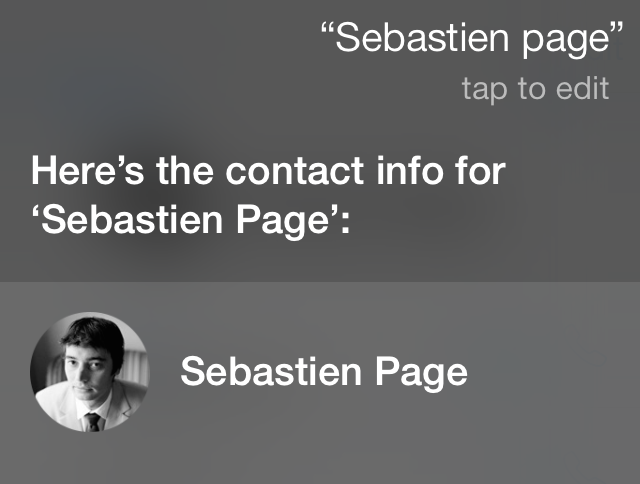 Once the contact is on Siri’s screen, tell Siri: “That’s not the way you pronounce his name.” Siri will respond appropriately. 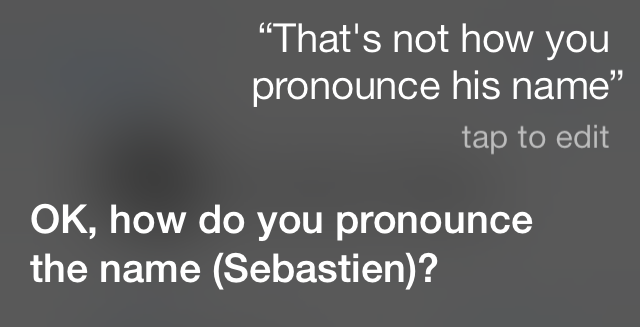 Siri asks you how to pronounce a name

Siri will provide you with three options for pronouncing the name. Listen to each option by using the play button to the left. 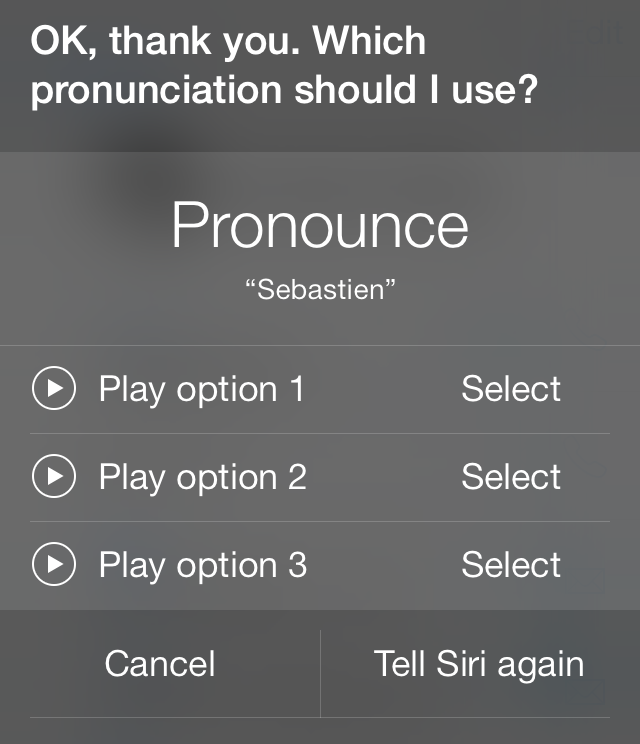 Once you’ve settled on a good Siri pronunciation, tap the select button to use that pronouncement. If you’d like to have Siri try again, use the Tell Siri again button in the bottom right-hand corner of the interface.

For convenience purposes, Siri can be invoked from the iOS’ Lock screen. Due to the potential security issues this poses, Apple has included a way to disable all Siri queries from the Lock screen. Just go to Settings > General > Passcode and toggle the Siri button under the “allow access when locked” section of the Passcode page.

Below is a semi-exhaustive list of commands for Siri. Due to the nature of Siri, and the fact that it is aware of your location and context, it would be purely impossible to list every single command available. The commands listed below are some of the most popular commands that you can use, and it is a good launching pad to get you started with Siri.

The commands listed are broken up into sections, and sometimes, sub-sections, depending on the need. For example, the Phone section features two sub-sections—Phone calls and Voicemail.

Getting movie tickets (U.S. only)

There are severals apps available for free download on the App Store that work in tandem with Siri for extended functionality. These apps are as follows:

“What time do the Bulls play?”

“What’s the best restaurant in Chicago?”

“Make a reservation for a restaurant in Chicago”

When’s the next Yankee’s game?

To use Siri’s dictation features, you’ll need to have Siri enabled, even if you only plan on using the dictation and not the personal assistant. Disabling Siri via the settings will prevent you from using dictation, so keep that in mind.

Dictation is a full-fledged feature in iOS, meaning that you can use dictation in virtually every instance where you use your iOS device’s keyboard. Like Siri proper, dictation relies on the internet, and works best when connected to a reliable Wi-Fi connection. 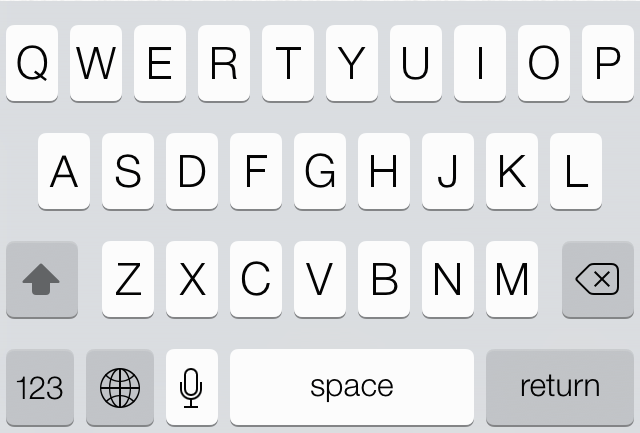 Notice the microphone button near the bottom of the keyboard 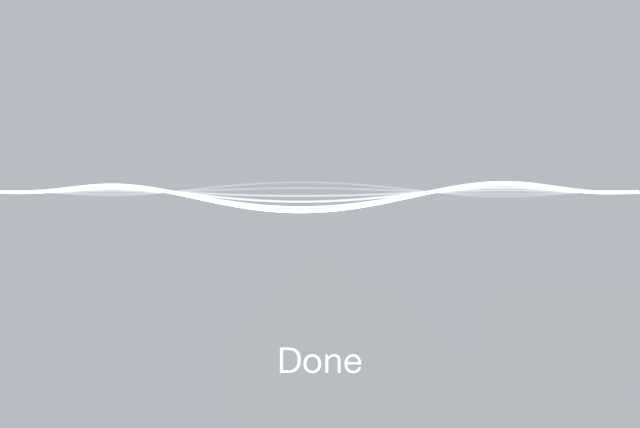 As you speak, the waveform moves

To access Siri’s settings, head to the stock Settings app and go to General > Siri. At the top of the Siri settings page, you’ll find a kill-switch that allows you to completely enable or disable Siri. If you disable Siri, iOS will default back to the Voice Control interface, which has limited functionality to control music and initiate calls. 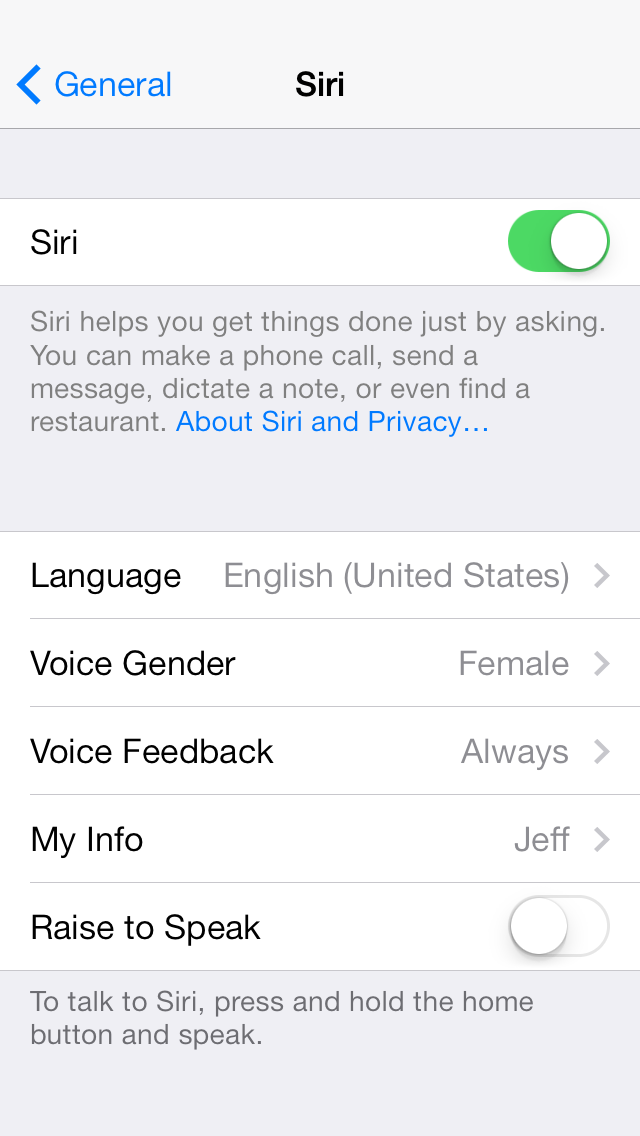 Enabling Siri will send information like voice input, contacts, and location to Apple to process your request. For this reason, you must have a valid connection to the internet in order to use Siri.

The language section of Siri’s settings allows you to specify the language that you use to communicate with Siri.

Lots and lots of languages

The following languages are included with Siri out of the box:

Some languages feature support for both male or female voices. English (United States) is one such language that supports both genders. Not all languages have both voices included. 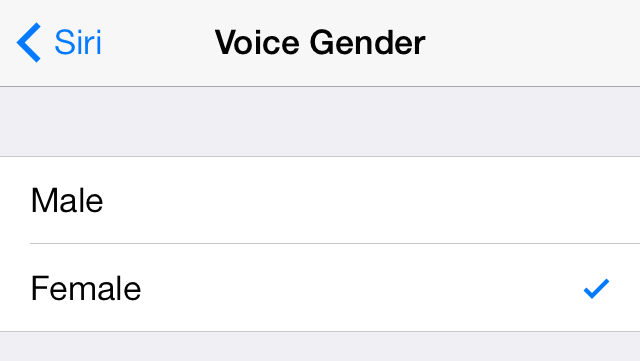 With this option set to always, Siri will respond to your inquiries via the iPhone’s speaker. With voice feedback set to handsfree only, you will only receive voice feedback when using a handsfree headset and/or when the iPhone headset is up to your head and the proximity sensor is activated. 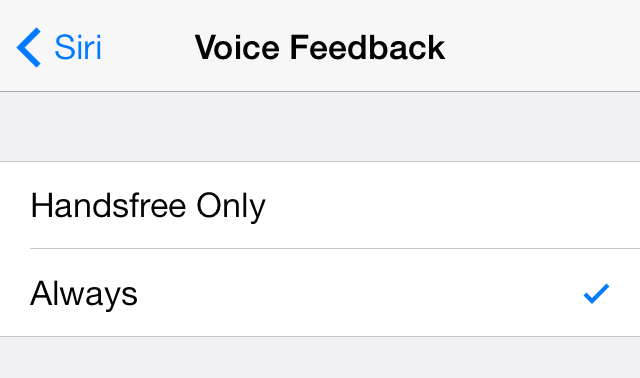 Keep voice feedback enabled to make Siri talk back to you

Invoking Siri involves holding the Home button for a two seconds, but you can also invoke Siri just by raising the phone to your ear and talking once you hear the Siri chime.

With Raise to Speak enabled

Siri has slowly matured into a decent platform for verbal communication within iOS. It’s still not perfect, and lacks some of the voice recognition pizzazz that makes Google’s competing offerings so good, but Siri was first and will always be remembered as such.

If you’re a sports fan, then Siri is a dream come true. It can quickly provide you with updates to ongoing games, spit out statistics, and keep up with season standings. More impressively, it’s able to do all of these things across all of the popular sports, including college sports.

Siri is also a great communication tool to use when your eyes are occupied. It’s an adequate way to send and respond to text messages on the fly, and it can usually get you by when you need to dictate a note, call a friend, or listen to a voicemail without looking at the device.

Siri’s dictation feature is one of the more understated and forgotten aspects of the personal assistant software. Dictation has never been something that Apple advertised heavily in television commercials or on stage at its press events, but it’s solid.

At the end of the day, Siri still needs more iterative attention to detail to get over the hump. This is especially true now that Apple’s competitors have essentially caught up with the technology. Siri works, but at times it feels like it’s still stuck in beta mode due to its inferior voice recognition and sometimes intermittent connectivity issues.

What do you think about Siri? Do you still use it every day? Sound off in the comments section down below.