Transit directions, along with a trip-planning feature and indoor maps, is rumored to be a cornerstone feature of Apple Maps in iOS 9. According to 9to5Mac on Tuesday, transit directions in Apple Maps are set to launch in approximately a half-dozen cities across the United States, Canada and Europe, with more to be added at a later stage.

In fact, as AppleInsider first reported three days ago, Apple’s mapping service in China is better than Apple Maps in Europe or the United States.

Over in Europe, iOS 9’s Maps Transit feature will launch with support for London, Paris and Berlin. AutoNavi, which already provides Apple Maps data for iPhone owners in China, is expected to provide Apple with transit directions for the massive 1.33 billion people market.

In the next iteration, Apple Maps should expand Transit coverage to Boston and Massachusetts in the United States and Tokyo in Japan.

Newly added cities should be available without the need for an iOS software update, with users receiving a notification as Apple Maps introduces support in their current city of residence.

As AppleInsider first explained in its extensive research three days ago, accurate transit lines and station depictions in China are already accessible in China, but only visible when accessing Apple Maps within the country.

For example, this is what Shenzhen, the Chinese city where Apple contracts to build most of its iPhones and iPads, looks like when using Maps outside China. 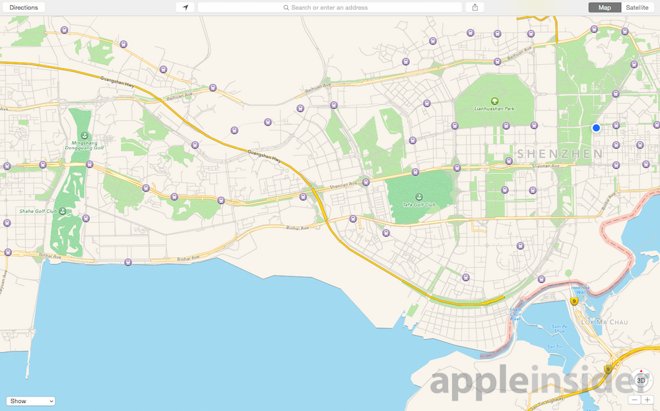 Now compare the above screenshot to the one below depicting Shenzhen, China, as shown by Apple Maps within China. The difference in mapping data and points of interest is clearly obvious. 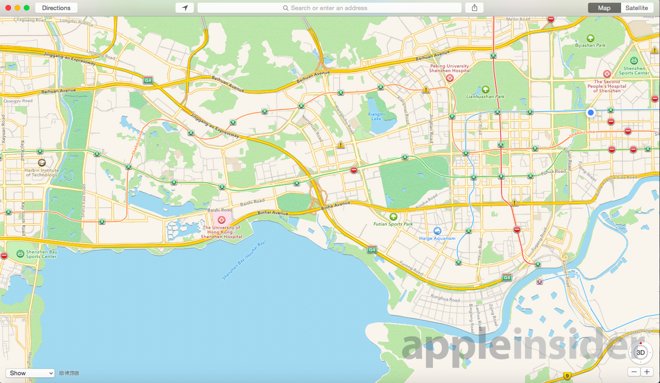 A much improved Maps with accurate transit lines and station depictions has been less visible because it hides behind China’s Great Firewall. That’s why only accessing Apple Maps within China produces much better results.

Even browsing Maps in satellite view produces similar differences in quality. Browsing Maps for China in satellite mode outside the country looks like “Cold War images captured by U2s in the 1970s,” as AppleInsider put it.

But if you accessed Apple Maps within China and turned on satellite mode, the imagery would be greatly improved. “As you drill down the images are clear enough to easily navigate, even though there was not yet support for Apple’s 3D Flyover images,” reads the article.

As such, Apple Maps in China gives a sneak peek at what’s in store for Maps in iOS 9.

In years past, Apple’s made a series of navigation and transit routing acquisitions, including WiFiSlam, Locationary, HopStop, Embark, Broadmap and Coherent Navigation.

With so many related acquisitions in the mapping space, Apple is no doubt set to beef Maps up with transit directions, indoor maps, floor plans in shopping malls, Google Street View like street-level photography and more accurate navigation data overall.