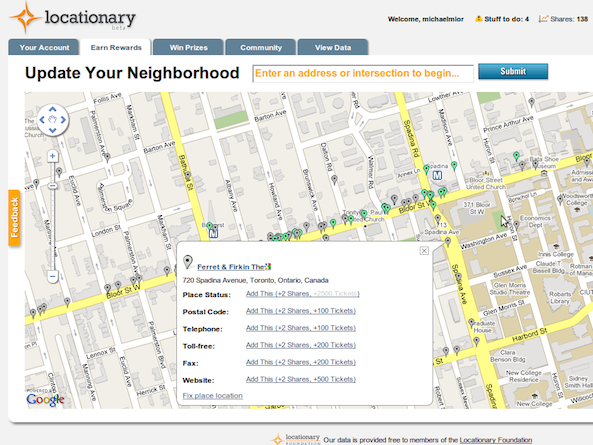 According to a new report, Apple has acquired Toronto-based Locationary, a Canadian startup that provides crowdsourced location data, for an unknown amount. The deal, which has already closed, includes both the company’s tech and team.

Apple spokesman Steve Dowling has even confirmed the new acquisition, offering up the usual boiler plate response ‘Apple buys smaller technology companies from time to time, and we generally do not discuss our purpose or plans.”

It’s not hard to imagine what Apple wants with a location data startup. It’s been virtually working no-stop to improve its Maps application that prematurely replaced Google Maps last year in iOS 6, and gave Apple’s PR team a workout.

And Locationary can certainly help with those efforts. Last September, the startup’s CEO Grant Ritchie wrote an article describing five challenges Apple faces as it builds out its new mapping service, and one of them is aggregating location data.

“It uses crowdsourcing and a federated data exchange platform called Saturn to collect, merge and continuously verify a massive database of information on local businesses around the world, solving one of location’s biggest problems: out-of-date information.

Apple has purchased a number of mapping software companies over the years, including Poly9, Placebase, C3, Poly9, and WifiSLAM—a Silicon Valley-based startup made up of ex-Googlers and Stanford graduates that specialized in indoor maps.

Apple obviously has some grand master plan in store for its Maps app, but it sure is taking its sweet time implementing it. During its WWDC keynote last month, the company unveiled new mapping software for the Mac, but talked little about iOS.

In the meantime, the competition is getting stronger. Google released version 2.0 of its iOS Maps application earlier this week. And with iPad support, enhanced navigation, and built-in area caching for offline viewing, it’s been getting rave reviews.