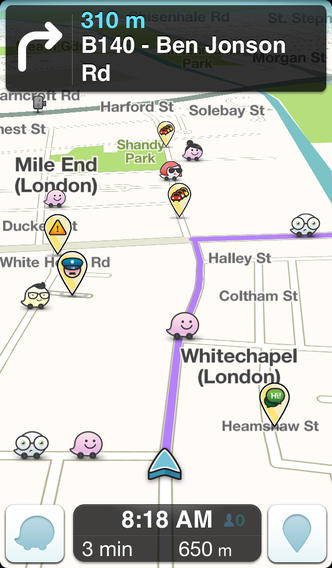 Waze, a crowdsourced GPS, maps and traffic service owned by Google, has refreshed its iPhone and iPad application with a few new features.

Now available at no cost in the App Store, the new Waze 3.9.4 is much faster than before. More importantly, it has added a cool new feature which tells you how long you’ll be stuck in a traffic jam.

Other features like navigation, route select and re-routing have been sped up significantly, an important feat given that you’ll be using the app while driving.

As mentioned before, Waze now has a new traffic bar to track your progress and inform you how long you may be stuck in a traffic jam.

A new ‘Let’s go via’ voice command lets you check out the route Waze is taking. Support for U-turns has been improved and you can now get a confirmation when sending your ETA.

The app supports features such as voice search, iOS Calendar integration, a handy Today widget in the Notification Center, AMBER alerts in the United States and much more.

It even lets you remember where you parked your car.

The 59.7-megabyte universal app requires an iPhone, iPod touch or iPad with iOS 6.0 or later.