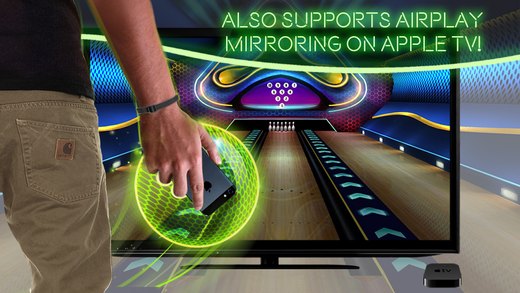 Rolocule, the veteran developers behind games like Motion Tennis and Dance Party, is back with perhaps its most ambitious title ever called Bowling Central. At its core, the game offers a stellar mobile bowling experience, with state-of-the-art physics, stunning 3D graphics and over 30 unique challenges. But things get really interesting when you turn on your Apple TV.

Utilizing Apple’s AirPlay Mirroring technology, Bowling Central can stream gameplay footage from your iOS device to your television set by way of Apple TV. This not only gives you a much better view of the game, but it also frees up your iPhone or iPod touch to be used as a controller for what is best described as a Wii-like gaming experience. Here, check out the demo:

Because iOS devices feature built-in accelerometers, similar to the chips inside Wii remotes, they can translate movements into on-screen actions—just like Wii remotes. Combine this with Apple TV, and it’s not hard to imagine the possibilities. In fact I’ve always wondered why more developers don’t take advantage of this, and my best guess is that the lag in AirPlay just that bad.

Anyway, if you’re looking for a new gaming experience, or just a good old-fashioned bowling game, you should definitely check out Bowling Central. As I said above, the folks at Rolocule have been doing this for a long time now, and have nearly perfected their ‘rolomotion’ physics technology. The team is easily putting out some of the best motion-based iOS games on the market.

You can find Bowling Central in the App Store for $2.99.