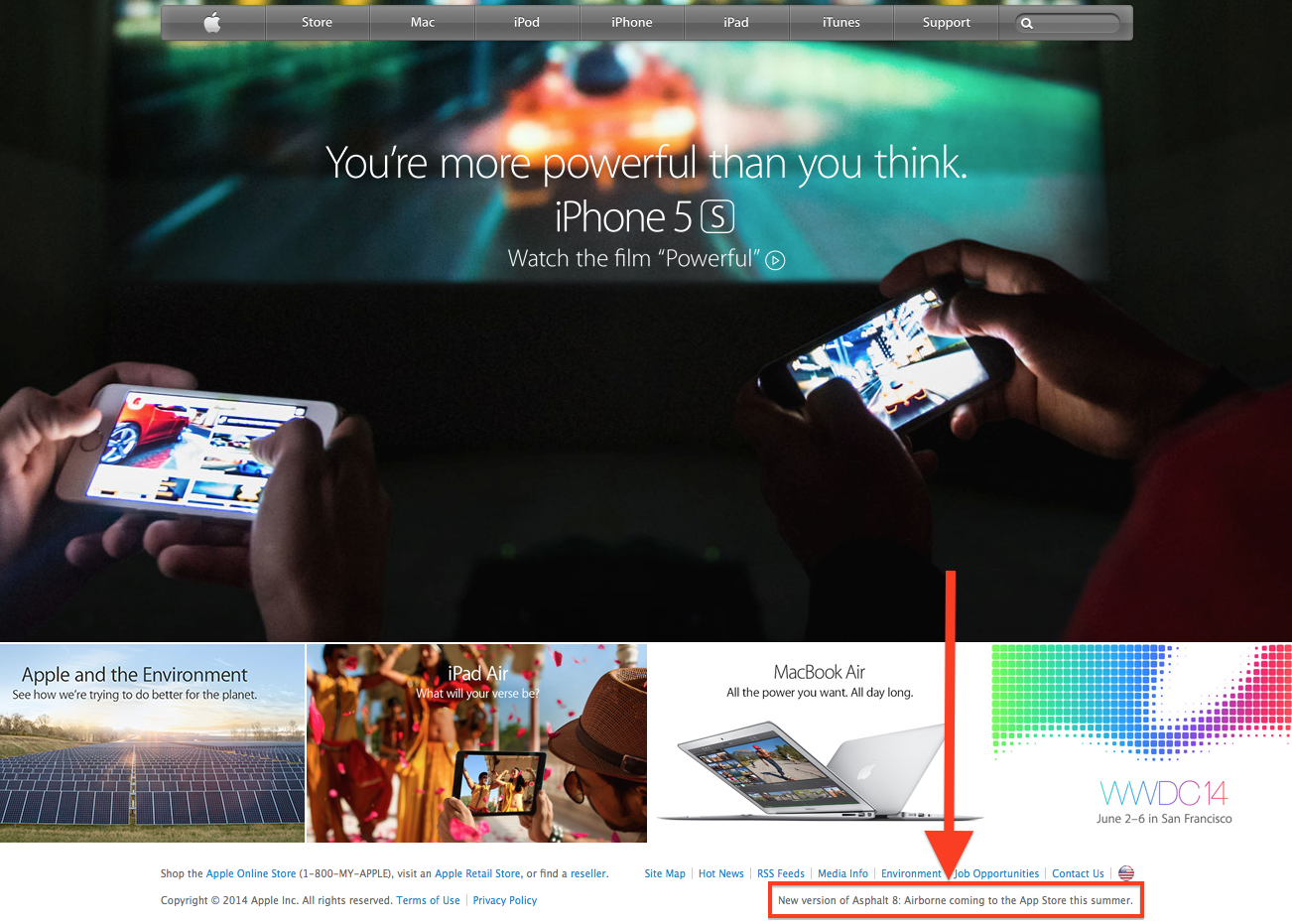 Apple rarely, if ever at all, advertises other people’s software on its front page, so imagine our surprise after noticing a line at the bottom of Apple.com saying that a “new version of Asphalt 8: Airborne is coming to the App Store this summer”. Yup, just like that.

The message seems to have first appeared on the Apple homepage nearly a month ago on Sunday, April 27, 2014.

I know what you must be thinking, but no – this game has not been featured in Apple’s iPhone 5s ‘Powerful’ television commercial in the United States – though you could be partially right because localized versions of the ad that Apple is airing in other countries do feature Asphalt 8…

A screenshot from the game appearing as a rotating teaser graphics on Apple’s homepage can be seen top of post.

Curiously enough, the game is not being highlighted on a special section on Apple’s website dedicated to promoting the apps and games from the iPhone 5s ad – likely because the game does not appear in the U.S. version of the iPhone 5s ad.

As noted by Apple Werbung, Asphalt 8 is indeed featured in the German and British version of the ‘Powerful’ commercial, have a look below.

The US version of the ad showcases Pacific Rim instead of Asphalt 8.

Still, this doesn’t fully explain why Apple would promote Gameloft’s game on its front page, which is of one of the most trafficked websites in the world.

And why would the company give anyone such a prominent placement? What’s so special about Asphalt 8 to warrant this?

Surely Apple wouldn’t do this just for fun and I doubt they charged Gameloft to promote their game – Apple does not sell advertising space on its homepage.

The wording “coming this summer” could hint at Apple’s upcoming summer conference for developers, which kicks off with a keynote on June 2. And the fact that a new Asphalt version is being advertised on Apple.com points to this being possibly much more than an ordinary content update. 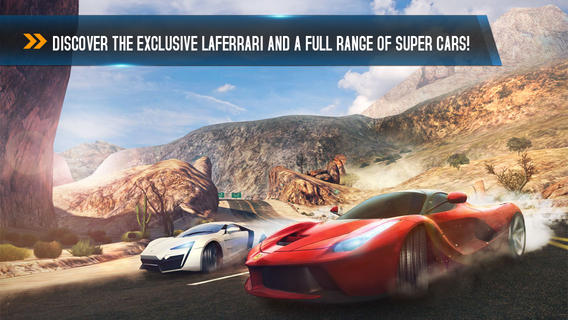 Maybe the game will feature yet-to-be-announced iOS 8 technologies aimed at improving games? Perhaps Asphalt 8 will take full advantage of the next iPhone’s improved graphics? Asphalt 8 is one of the best AirPlay-enabled games so maybe this update will feature inaugural support for next-gen AirPlay features in iOS 8?

This could make sense given that previous Asphalt games, Asphalt 6: Adrenaline and Asphalt 7: Heat, were famous for their dual-screen gameplay via AirPlay.

These are all viable possibilities, especially considering Gameloft is one of the premium iOS developers which gets early access to Apple’s unreleased software. Also, Gameloft developers typically get invited onstage to showcase their work at Apple’s media events.

Another (unlikely) connection: Gameloft, along with Apple, Google and Amazon, is currently finding itself in the crosshair of Italy’s Antitrust and Competition Authority over unwanted In-App Purchases. 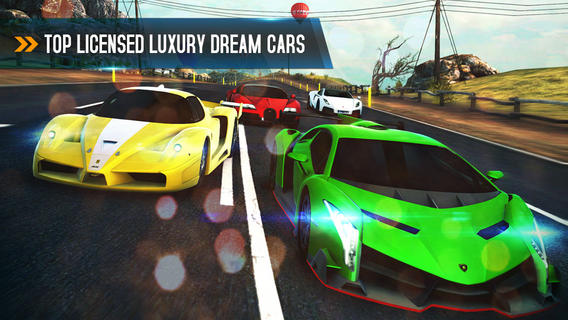 The French company is one of the most prolific iPhone and iPad developers and was one of the first major publishers to embrace the freemium model (much to the detriment of players, some might opine). You guessed right, Asphalt 8 is a free-to-play download with a bunch of In-App Purhcases.

Anyway, I wanted to share this little nugget with you because I find it rather peculiar that Apple is giving an upcoming update to the existing App Store game such a prominent placement on its heavily visited front page.

I’m dying to hear your own theories on the matter so feel free to chime in with your thoughts down in the comments.

Hat tip to iDownloadBlog reader Anmol who brought this to our attention.