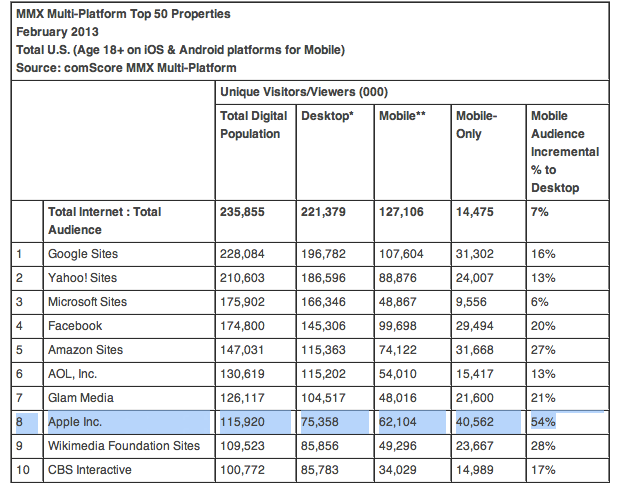 That’s a significant difference versus a 38 percent average gain for the top 100 measured web properties and the largest increase in the top ten rankings. It should be noted that the web analytics company now finally includes both hits from desktop as well as mobile devices. Go past the fold for the full breakdown…

By comparison, Google, Yahoo and Microsoft sites lead the top three with sixteen, thirteen and six percent gain, respectively, followed by Facebook (up twenty percent) and Amazon sites (up 27 percent).

comScore’s numbers are platform agnostic. Mobile hits include all smartphone and tablet platforms and desktop includes audience reached via video.

The average property within the Top 100 increased its audience size by an average of 38 percent, and 19 of those properties had incremental mobile audiences that extended the reach of their desktop audiences by at least 50 percent, comScore noted.

Here are the full top 50 rankings.

As you can see, the properties with the greatest incremental percentage gains from mobile were Groupon (223 percent), Zynga (211 percent) and Pandora (183 percent).

We’re always taking any kind of survey or research with a healthy dose of skepticism and so should you. Still, this particular survey highlights key trends and the fact that Apple’s web site is climbing in rankings ahead of, say, CBS is notable in and of itself.