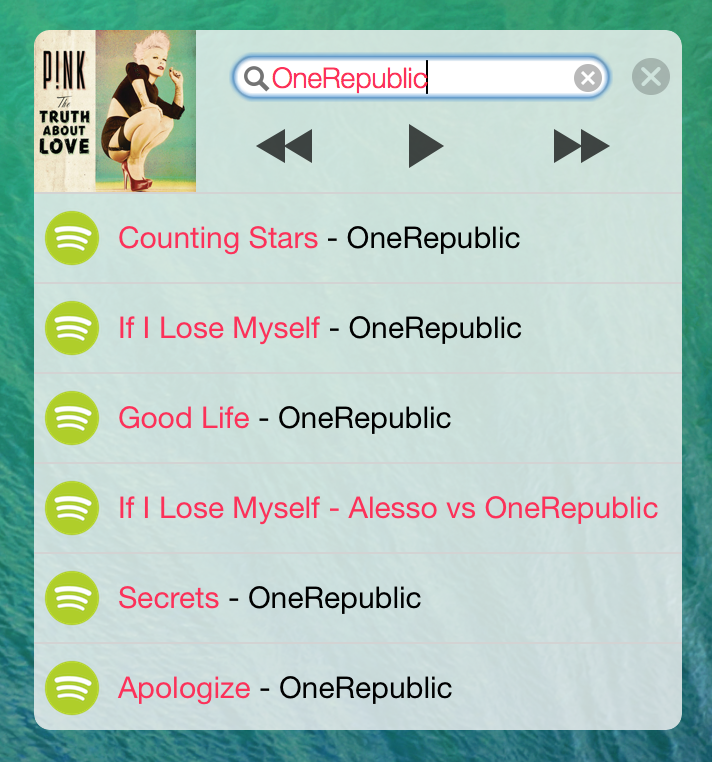 MiniPlayer, a gorgeous jailbreak tweak by Italian developer MPow, has been available on iOS for quite some time and with time, it’s gotten even better.

As Jeff noted in his review of MiniPlayer 2.1 last May, this tweak makes it ridiculously easy to control your music directly from the app’s interface with a simple tap and hold gesture on the now playing album art.

Subsequent updates have added more stuff like Play Next, enhanced scrubbing and search and what not. And yes, it’s an iOS 7 compatible tweak.

If you’ve been loving MiniPlayer on your jailbroken iOS device, you can now have that compelling experience and minimalist user interface (courtesy of Surenix) on your Mac, too! Read on for the full reveal…

Like the iOS edition, MiniPlayer for Mac makes it super easy to control music playback via its stylish dark panel featuring big play/pause and previous/next buttons. The app takes full advantage of the cover artwork by displaying the album image front and center, next to Mini Player’s playback controls.

Notice a magnifying glass icon in the top right? Click it to reveal the search field and comb through your music collection quickly, with matching items automatically populating as you type along.

To keep this window on top of all other windows, hit Command – W.

Mini Player doesn’t just support iTunes libraries: you can use it to control and search your music collection kept in other popular apps, including streaming services Spotify and Rdio.

Unfortunately, you are currently limited to searching one music service/app at a time so you’ll have to manually choose your music service from the app’s Music Services menu.

Another nice touch: hover over the album artwork to show the Share icon. 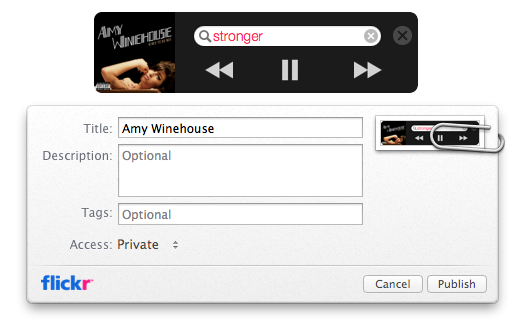 The app’s extensible architecture, arguably its most easily overlooked features, lets anyone write a plug-in for any specific music service. And if you’re kind enough and email the developer, he’ll feature your own plug-in on the MiniPlayer website and include it right into the app.

At the time of this writing, no third-party plug-ins for MiniPlayer were available.

According to MPow, MiniPlayer for Mac won’t make its debut on the Mac App Store due to Apple’s sandboxing requirements that prevent the use of downloadable plug-ins.

After the download finishes, double click the MiniPlayer.zip archive inside your Mac’s Downloads folder to unpack it and then launch MiniPlayer.app by double clicking its icon.

Depending on your Security & Privacy options in System Preferences, OS X may tell you that it can’t open the app because it’s from unknown developer. Fret not, my friends: simply right-click the app’s icon, choose Open from a drop-down menu and then hit the Open button in the warning dialog that will pop up.

Note that launching MiniPlayer will also fire up iTunes.

The app is still rough around the edges and not all the kinks have been worked out so you may experience some interface and functionality issues that we expect will be fixed in the next update.

Have you tried MiniPlayer for Mac yet?

I want to hear your thoughts so hit us down in the comments.