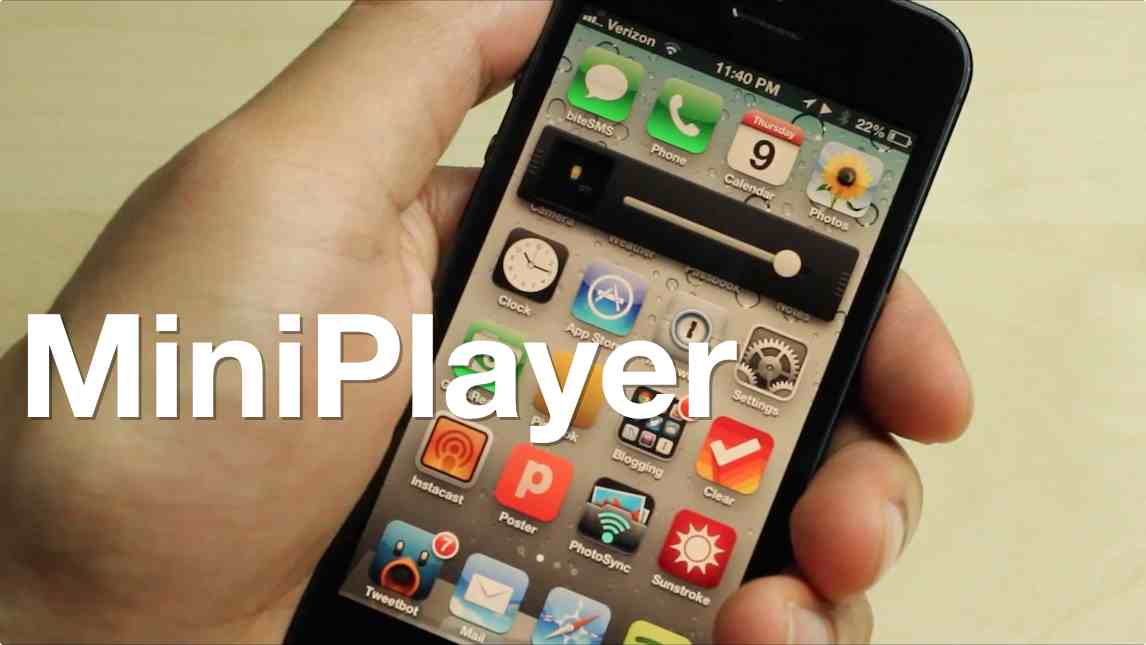 You know how they say some things get better over time? Wine falls squarely into that category. MiniPlayer does too. The upcoming 2.1 version, which is being submitted to Cydia’s BigBoss repo today, is a more refined experience than its predecessors.

The first version of MiniPlayer had potential, but left a lot to be desired in the avenue of designed. Now that Surenix has stepped on board with the project to help out with its design, the tweak has come into its own.

Music controls have always been a part of a crowded market in Cydia, so it takes a lot to make any particular tweak stand out in this space. I’m happy to report that not only does MiniPlayer stand out with its latest 2.1 update, it shines. Check out our full video walkthrough of the latest version of MiniPlayer right after the break.

Just to briefly catch you up on things, version 2.0 of MiniPlayer was a huge improvement over the 1.0 release. The developer, MPow, deserves a lot of credit for this, but this tweak has Surenix written all over it. Cody put it best, when covering the 2.0 release:

The initial release saw mixed reviews, but if you weren’t a believer before you need to checkout today’s update. MiniPlayer 2.0 just hit Cydia, and thanks to a complete UI overhaul by Ayecon theme designer Surenix, it looks and feels much better…

I think that’s an apt description of MiniPlayer. With version 2.1, I can report that this version feels even better than the 2.0 version. For starters, there’s a new black theme that looks absolutely stunning. I was never crazy about the bland gray look of the stock theme, but this black theme really makes the tweak stand out amongst the Home screen app icons. The new theme can be set to default in the tweak’s preference panel, but it can be swapped on the fly using a handy double tap gesture on the MiniPlayer itself.

Up next is a new feature that music lovers will surely enjoy — the ability to toggle the music volume directly from the MiniPlayer interface. A simple tap and hold gesture on the now playing album art will yield a slider for the music volume. Once you’ve finished adjusting the volume, just wait, and the player will eventually go back to its default look.

The other big feature included with MiniPlayer 2.1, is the option to open any music app via taping album art. By default, the tweak will open to whatever music app you’re using to play the currently playing song. With version 2.1, you can also configure the tweak to open to any app using a setting in the preference panel. Unfortunately, the only way that you’re able to launch the app configure via the preferences is if you kill the music app that the tweak is currently using. That’s a hiccup that the developer is apparently working on to remedy.

Speaking of development, I’ve talked to Surenix, and he’s confirmed that the pair have discussed the possibility of having MiniPlayer work with landscape mode. Landscape mode support is currently not in version 2.1, but I certainly wouldn’t dare rule it out for a future revision of the tweak.

Overall, I think MiniPlayer 2.1 is the definitive version of the tweak. Version 1.0 showed promise, version 2.0 made it supremely usable, and version 2.1 is as smooth as butter. If you’ve been fence sitting thus far about MiniPlayer, then get off the fence, get over to the BigBoss repo, and purchase MiniPlayer. It’s a free upgrade for previous customers. New customers should plan to fork over $1.99. What do you think about the update?