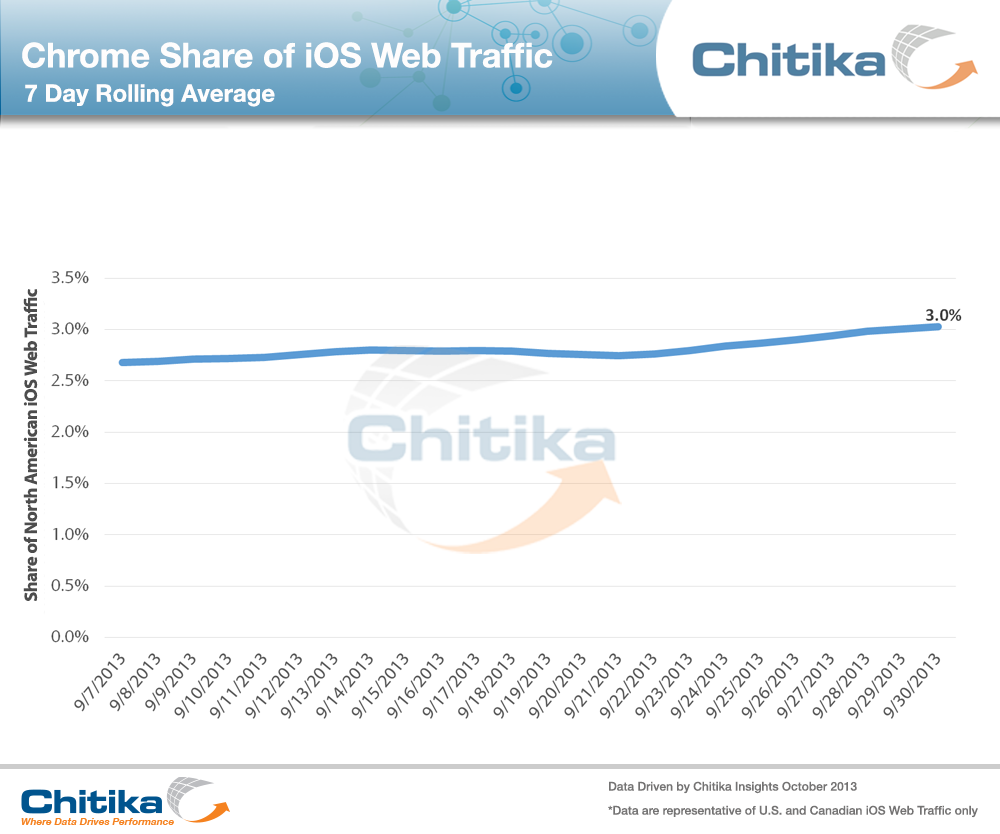 Google’s Chrome went from zero market share to becoming the world’s most popular desktop web browser in just five years. And since its release on Apple’s iOS platform in June 2012, Chrome’s been consistently the top third-party browser on the App Store (free download), making its way on a lot of people’s Home screens. Research firm Chitika estimates that Chrome’s share of web traffic coming from the iPhone, iPod touch and iPad devices has doubled since June 2012 launch.

According to Chitika, Chrome’s rise boils down to the cumulative effects of Google’s aggressive advertising campaign coupled with last month’s release of the iPhone 5s/5c and Google’s quick reaction in releasing iOS 7-optimized Chrome version.

The data is based on “tens of millions of North American ad impressions” generated by iOS devices between September 1 and September 30, 2013. Chitika analyzed user agent and used other tricks to break down impressions by browser type and vendor. 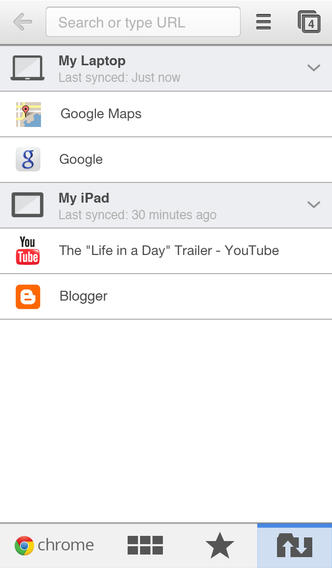 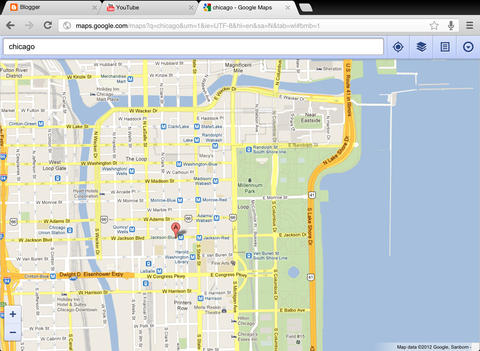 The iOS 7 debut may have helped as well, notes Chitika:

While Chrome usage share on iOS devices rose only about 0.3 percentage points following September 22, keep in mind that iOS has an incredibly large existing user base meaning that usage changes need to be exceptionally great to cause a significant impact.

In this realm, Google still has work to do, but the recent growth is a likely indicator that Chrome is regaining some traction in the iOS browsing space.

Chrome’s rise is especially newsworthy knowing iOS doesn’t include a feature to allow users to pick their default browser. The Internet giant has cunningly tackled this issue by improving interoperability between its popular iOS apps.

For instance, some of Google’s apps can open web links for Google+, Maps, Drive and YouTube in their iOS apps instead of Safari. You’ll recall that Chrome last month gained the ability to open those web links in native apps.

That third-party developers makers are increasingly allowing their users to choose whether to open web links in Safari or Chrome (thanks to Google’s integration tools for iOS developers) is also helping boost Chrome’s numbers and drive engagement for Google service.

A month after it was first released on the App Store, Google’s browser had accounted for a cool 10.3 percent of third-party browsers on the iOS platform, Chitika learned. As Apple prohibits non-standard frameworks, all those iOS browsers actually use the same WebKit engine like Safari (sans the speedy Nitro Javascript engine).

You can download Chrome free from the App Store.

Which is your go-to iOS browser: Safari, Chrome or some other third-party app?

I’m using both Safari and Chrome.

I stopped using Chrome for private browsing because a recent update has broken its Incognito mode, which Google argues stems from the iOS design requiring both normal and Incognito tabs to share the same HTML5 local storage.