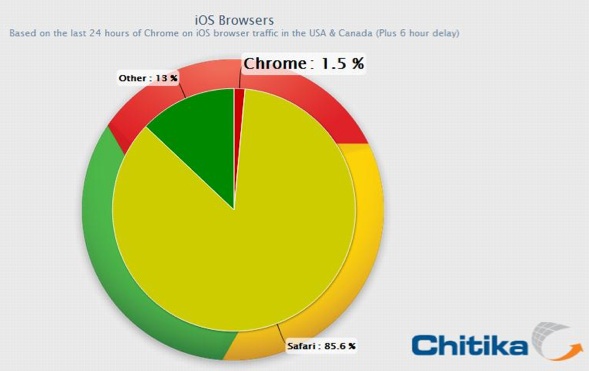 Google pushed out its widely popular Chrome browser to iOS last month to much fanfare. In fact, it took less than 24 hours for the app to reach the #1 spot in the App Store’s list of top free offerings.

Now here we are, nearly a month later, and the initial buzz has warn off. So how many people are still using the browser? A new report from online advertising firm Chitika gives us some insight…

Based on “hundreds of millions” of impressions on the company’s ad network, Chitika says that Safari accounts for 85.6% of iOS browser usage. In addition, “other” third-party clients account for 13%. And Chrome 1.5%.

But the big number for Google here is third-party browser marketshare. Safari, as the pre-installed default, was obviously going to be the winner in overal iOS browser activity. But in just under a month, Chrome has garnered a little over 10% (10.3% to be exact) of the third-party client market.

Obviously, while Chitika’s ad network is quite extensive, it doesn’t cover the entire web. So as such, this report does not reflect all usage. But it does provide a large sample.

It’ll be interesting to see if Chrome continues its steady climb, despite the fact that Apple’s restrictions prevent it from being made the default browser in iOS. That is, unless you’re jailbroken of course.

Are you currently using Chrome for iOS? Why or why not?