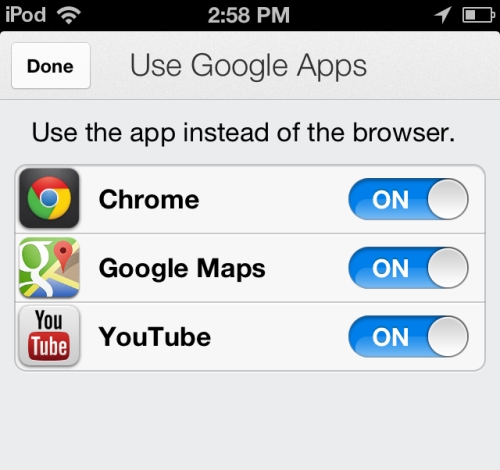 Hot on the heels of yesterday’s Gmail update—which added the ability for users to choose to use Google’s iOS apps over their stock counterparts—Google has published a blog post reminding iOS devs that they too can utilize Google’s offerings.

Particularly, it spotlights Chrome integration in the post, informing third-party developers that they can use a simple callback function in their apps that will launch web links in Chrome (if it’s available, obviously) instead of mobile Safari…

“As an iOS app developer, when your users want to access web content, you currently have two options: create your own in-app web browser frame, or send users away from your app to a browser.

With Chrome’s OpenInChromeController class with x-callback, users can open a web page in Chrome and then return to your app with just one tap.”

Google has created a nice little platform for itself, on top of Apple’s iOS platform. Its apps are among the App Store’s most popular, and several of them are used in lieu of stock iOS apps: Google Maps, Google Search etc., and they all link to each other.

The big benefit for developers to using its Chrome callback feature, Google says, is that it includes a ‘back to app’ button (sort of like the jailbreak tweak AppSlide) so that users can return to their apps after opening a web link in Chrome with just a single tap.

I bounce back and fourth between Safari and Chrome on iOS on a pretty regular basis, and right now I’m on a Chrome kick. So I’m crossing my fingers that developers accept Google’s proposal here. The more pressure Apple feels, the better Safari will get.