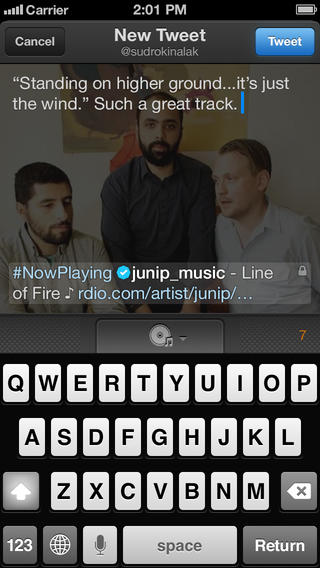 After updating its official iOS client with the somewhat controversial conversation redesign (hint: blue lines), the micro-blogging service Twitter now turns its attention to its music discovery app, Twitter #music. In a new update issued Friday, Twitter #music now shows tweets along with each track right in your #NowPlaying feed.

“We’ve put the Twitter into Twitter #music,” the company boasted. That’s not all, as these tweets are fully actionable, which makes me wonder whether the company will eventually fold the #music app into the Twitter mobile client down the road…

These tweets that appear in your #NowPlaying feed along with each track can be interacted with: you can reply to, retweet, favorite, email or message any Tweet.

Other than this interesting feature, there are no other additions in this version of Twitter #music. Last month gave us a fairly substantial update which has brought out several improvements, like personalized recommendations based on analyzing your music library and enhanced artist pages and features.

If you’re into music and love the Shazam song-matching service, their new Twitter Card can now play song previews that were shared from the Shazam app, right in your Twitter timeline.