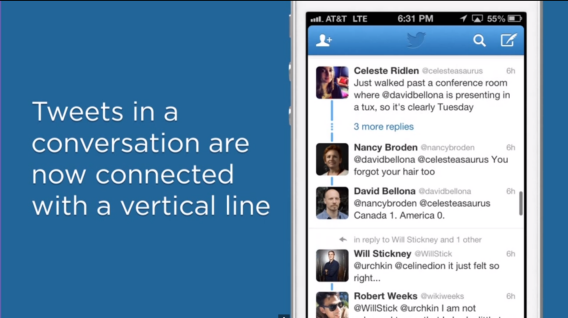 Apart from bolstering up users’ security with two-factor authentication, it’s been a while since Twitter added any life-changing capability to its iOS and Mac software. That being said, today’s update should mark good news for mainstream users who for a long time have been asking for a sensible way to follow long conversations on the micro-blogging service.

As part of the redesigned timeline, there’s now a blue line indicating a conversation between people you follow. The conversation flow is even kept intact if you reply to a tweet, but delete the user name of the person you’re replying to. Also, the first tweet in the conversation now appears above the most recent reply…

Tweets that are part of a conversation are shown in chronological order so it’s easier for you to follow along. You’ll see up to three Tweets in sequence in your home timeline; if you want to see more, you can tap a Tweet to see all the replies, including those from people you don’t follow.

Tapping reveals the entire conversation, with quick shortcuts letting you instantly reply, retweet or favorite a tweet. Another important feature, and this is by design: the conversation view puts the first tweet in a conversation at the top, even if it was sent hours previously.

Oh, and you can now share conversations via email on iPhone and Android or via direct message, the latter inexplicably being an Android-only feature.

The redesigned conversation view starts rolling out to everyone today.

That’s a lovely tune, isn’t it?

You can download Twitter’s iOS app free from the App Store.

The company’s web interface and Android client have gained these features as well.

And if you’re being stalked or chased by Twitter spammers, you can now report individual tweets for abuse or spam directly from Twitter for Android and Twitter.com (it’s already available on Twitter for iPhone).

Love watching all the critics of change on Twitter. I’m reminded of how much everyone HATED Retweet when Twitter officially implemented it.

I’m not a big fan of Twitter’s mobile app, but it’s a nice little update that helps a great deal with discovering, enjoying and following conversations on Twitter.

As is often the case with major updates like these, some people are unhappy about their timeline becoming festooned with vertical blue lines. As you could imagine, die-hards took to – imagine that – Twitter to complain about messing up their workflow.

If it’s any consolation, even Twitter UK’s director said the new conversation view “drove me crazy for a week”, but now he can’t do without it.

So if you’re hating Twitter’s conversation flow, simmer down – you’ll like it soon enough.