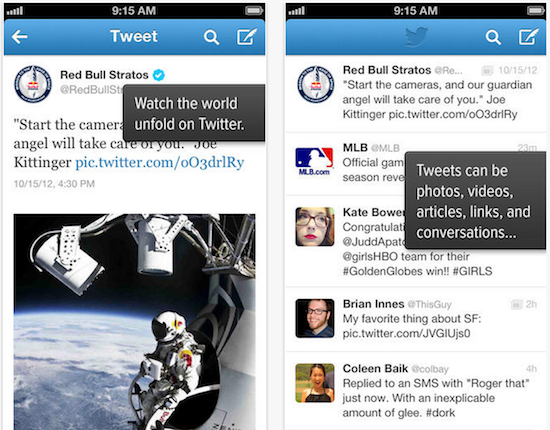 Folks using the official Twitter client on iOS will be happy to hear that it has received a significant update this morning, bringing the app to version 5.9. The update includes a handful of improvements, including 2 step authentication and enhanced photo searching.

Twitter first introduced two-step authentication back in May, following a number of widely widely publicized hacks involving celebrity and other high profile accounts. With today’s update, Twitter is bringing the new security feature to iOS and Android devices…

Now you can protect your account with login verification. This is a new form of two-factor authentication that allows you can turn on and manage directly from your app.

Also in this release:
• View anyone’s photos in a beautiful gallery when you visit their profile and tap ‘View more photos’
• Photo search results can also be viewed in a gallery
• Enjoy several improvements to lists: create new lists and edit your existing lists; manage titles and descriptions; add or remove members
• Other bug fixes and improvements

The new enhancements to Twitter’s photo search are also welcomed, as they allow you to browse through a user’s entire library of uploaded photos from within the mobile app. The fact that there’s a gallery mode, allowing you to view them all at once, is also a nice touch.

I’m more of Tweetbot/Twitterrific kind of person myself, but this is a solid update—both security-wise and feature-wise—for folks who use the official client. If you’d like to check it out for yourself, you can find Twitter in the App Store, for both iPhone and iPad, for free.