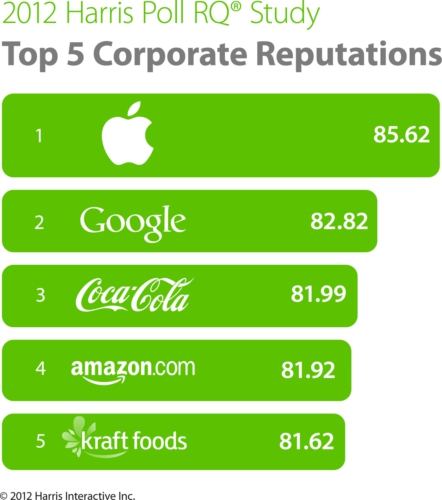 2012 has been pretty good to Apple thus far. Since the new year started, the company has announced record-breaking sales and revenue from its previous quarter, was named top smartphone manufacturer in the world, and has watched its stock price climb past $500 per share.

And then yesterday, the iPhone-makers received another accolade. According to the 2012 Harris Poll Reputation Quotient, a survey that measures corporate reputation for US brands and companies, Apple is now the highest-regarded company in America…

The survey asked the general public to measure the reputation of the 60 most visible companies in the US, and covered 6 categories: Social Responsibility, Emotional Appeal, Financial Performance, Products & Services, Vision & Leadership, and Workplace Environment. 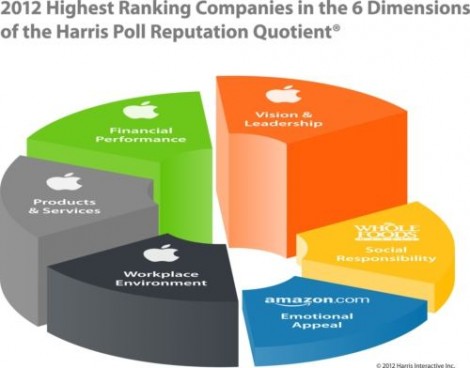 Of the 6 categories, Apple topped 4 of them, giving it the highest RQ (Reputation Quotient) score of 85.62. Not only was that enough to top Google, who came in first place in last year’s poll, but it was the highest score ever recorded in the Harris Poll’s 13-year existence.

Google still came in second though, with a score of 82.82. Other notable ranking companies were Amazon.com, who came in fourth place, and Microsoft who came in 15th place. Facebook, interestingly enough, didn’t make the list at all this year.