Go beyond the Music app with this Apple Music tips and tricks video showcasing the secret and lesser-known features of the Music app that you should be using.

If you use Apple’s Music app to listen to or stream your favorite tunes on iPhone, iPad, Mac, Apple Watch and Apple TV, be sure to watch our hands-on video teaching you various Music app tips. We’ve done our best to unearth the lesser-known or hidden features your average Apple Music user is probably unfamiliar with.

After watching the ten-minute video embedded above, give our lead video guy Michael Billig (@michael_billig) a shoutout on Twitter and be sure to subscribe to the iDB YouTube channel with post notifications turned on so you don’t miss a thing.

Apple Music tips everyone should know about Show me all Music app tips
1. Turn on automatic downloads for offline listening
2. Manage storage settings for lossless audio
3. Adjust your EQ settings
4. Turn on spatial audio
5. Manage sections at the top of your library
6. Sort your song list
7. Sing along to your favorite music
8. Jump to a song’s album quickly
9. Create custom stations
10. Inline Up Next shortcuts
11. Custom images in playlists
12. Sort your playlists
13. Search music by mood
14. The New Music Mix playlist keeps you in the loop
15. Don’t forget about the top charts
16. Stream live radio
17. Fullscreen album art on the lock screen
The Music app isn’t that bad after all

In Settings → Music, turn on Automatic Downloads so that every song/album added to your library is automatically downloaded for offline listening. If your iPhone is low on storage, toggle this off to stream songs instead.

Almost the entire Apple Music catalog is available in this format. On the downside, lossless streaming over cellular or Wi-Fi connections consumes significantly more bandwidth. Read: How to change streaming and download quality in the TV app

In other words, storing higher-resolution songs for offline listening is definitely going to take up significantly more storage space on your device.

Thankfully, you can manage audio quality separately for offline downloads, cellular and 5G/Wi-Fi streaming after enabling lossless audio in Settings. You could, for instance, configure your iPhone so that it never downloads music in the lossless format and only stream lossless audio over cellular.

Lossless only works with wired headphones. Leave it off if you have AirPods or other wireless headphones because it’s not worth the extra space and bandwidth.

Not many people are even aware that they can change the way music sounds on their iPhone and iPad by adjusting an equalization (EQ) setting. In Settings → Music → EQ, you can choose between various audio presets.

The equalizer is turned off by default. We recommend switching between the different equalizer settings whilst listening to a song to instantly hear the difference.

The vast majority of Apple Music catalog is available in Dolby Atmos. Artist have re-mixed much of their old work for Dolby’s multi-channel audio format, with new albums being recorded in this format as well.

This lets you enjoy Apple Music in spatial audio, which applies audio filters and effects for a better separation of vocals and instruments.

This will prompt the Music app to play a song’s Dolby Atmos version when using compatible headphones such as the AirPods, AirPods Pro, AirPods Max and some Beats products (spatial audio doesn’t support the iPhone speaker). To control spatial audio, press and hold the volume slider in Control Center to access a hidden toggle. Read: How to get details about any Apple Music song on your Mac

5. Manage sections at the top of your library

The Library tab of the Music lists a few options at the top: Playlists, Artists, Albums and Songs. But did you know that you can choose which sections to display?

To do so, touch Edit in the top-right corner and enable desired sections—Playlists, Artists, Albums, Made For You, Songs, TV & Movies, Music Videos, Genres, Compilations, Composers, Downloaded or Home Sharing. Tick the boxes next to the sub-sections you’d like to show in your library, then touch Done.

The Music app defaults to sorting your music by the artist but wouldn’t it be great if you could browse your library by artists or, better yet, in the alphabetical order?

Well, you can but you’ll need to switch to the Library tab and then go to your song list by hitting Songs at the top of the screen. Now touch Sort in the top-right corner and choose how to sort the list: Title (alphabetical order), Recently Added (from the most recent additions to the oldest ) or Artist (alphabetical order).

7. Sing along to your favorite music

The majority of Apple Music songs have embedded time-synced lyrics. Simply start listening to a song in the Music app, then switch to the Now Playing screen.

To bring up a panel with animated lyrics, hit the icon in the bottom-left corner. You can tap a line to jump to that part of the song. To share up to four lines of lyrics, touch the three-dotted (…) menu on the lyrics screen (or press and hold a song in other views), then choose Share Lyrics.

8. Jump to a song’s album quickly

Whenever you’d like to see the album a song originates from, just press and hold a song in any view and choose Show Album or hit album artwork displayed at the top of the contextual menu. This will show you a list of songs from that album which are present in your library. To reveal the entire album track list, hit Show Complete Album at the bottom of the list.

Back in the iTunes days, there was a feature dubbed Genius which provided personalized recommendations based on the contents of your music library and other factors. iTunes is no more, but the idea behind Genius lives on.

To hear music similar to the artist, song or genre you’re currently listening to, hit the three-dotted (…) menu on the Now Playing screen and select Create Station.

Alternatively, at any point invoke Siri and say something along the lines of “Hey Siri, start a station from,” followed by the name of a song, artist or genre.

10. Inline Up Next shortcuts

The Music app holds a list of songs to play next in a special queue, dubbed Up Next. To see your Up Next list, touch the icon in the lower-right corner of the Now Playing screen which resembles three bulleted lines. You can now drag any track to a new position to reorder the Up Next queue to your liking.

You can also swipe right over a song in the list, then choose the purple icon to play this song next or the orange one to add it to the very end of the Up Next queue. To remove a song from Up Next, swipe left over it and hit the Delete icon.

To make your playlist easier to distinguish visually, upload a custom cover image. Select Playlists under the Library tab and choose the desired playlist, then touch the three-dotted (…) menu and choose Edit.

Now hit the Camera button within the cover image to reveal options for taking a photo or choosing an image from your library to use as playlist artwork.

Folks who have lots of playlists might want to sort them alphabetically for easier browsing. Hit the three-dotted (…) menu on the playlist screen and choose Sort By, then select how you’d like to sort your playlists: Playlist Order, Title, Artists, Album or Release Date.

Sorting playlists requires iOS 16.0 or later. Before iOS 16, you could only browse your playlist in the order you’ve added them but now you can choose a custom sort order.

Instead of using keywords to find the right song, sometimes you just want to listen to something that matches your mood. Apple’s editors have created hundreds of mood-based playlists, with the most popular ones listed underneath the Browse tab (the Music by Mood section or touch a mood like Feel Good).

For even richer results, go to the Search tab and enter a mood-based keyword like Romance, Calm or Party to get a list of relevant songs that match that theme.

14. The New Music Mix playlist keeps you in the loop

Aside from playlists created by human experts, Apple Music provides algorithmically-created ones, dynamically updated and personalized just for you. For example, one of those is filled with the best of what your friends are listening to.

To discover something new, hit the Listen Now tab in the Music app and touch the heading labeled Made for You, then select the New Music Mix playlist.

This playlist exposes you to new music from artists Apple’s algorithm thinks you’ll love, updated every Friday. While there, feel free to explore other personalized playlists such as Favorites Mix, Get Up! Mix, Chill Mix, Friends Mix and more.

15. Don’t forget about the top charts

One of the best ways of discovering new music is through exploring charts in the Music app that list the most-streamed songs and more. Actually, this playlist is a great way to discover the day’s most popular songs.

Go to the Browse tab and scroll all the way down, then choose Charts. Now touch the Daily Top 100 heading to see what’s trending globally or in each country separately. If you’d like to check out what’s popular in over a hundred cities around the world, select the City Charts heading instead.

Alternatively, explore the top songs, albums, music videos or playlists by selecting corresponding headings (Top Songs, Top Albums, Top Videos and Top Playlists). Charts include songs across genres. To view genre-based charts instead, hit All Genres in the top-right corner and select a listed genre such as Rock or K-Pop.

Apple Music supports live streaming of any broadcast radio station that’s a part of the iHeartRadio brand. This is a great way to follow your local radio stations in the Music app. To get started hit the Search tab and enter the radio station’s name, call sign, frequency, or nickname. You can also ask Siri to stream a live radio station.

iOS 16’s Music app lets you switch between a standard Now Playing panel on the lock screen and an expanded version that fills up the screen with album art.

Simply touch the small album cover image in your Now Playing controls on the lock screen to switch to the fullscreen player. In this mode, the album artwork is much bigger and the color of the background and player controls matches the album art.

To go back to the default view, hit the cover image.

The Music app isn’t that bad after all 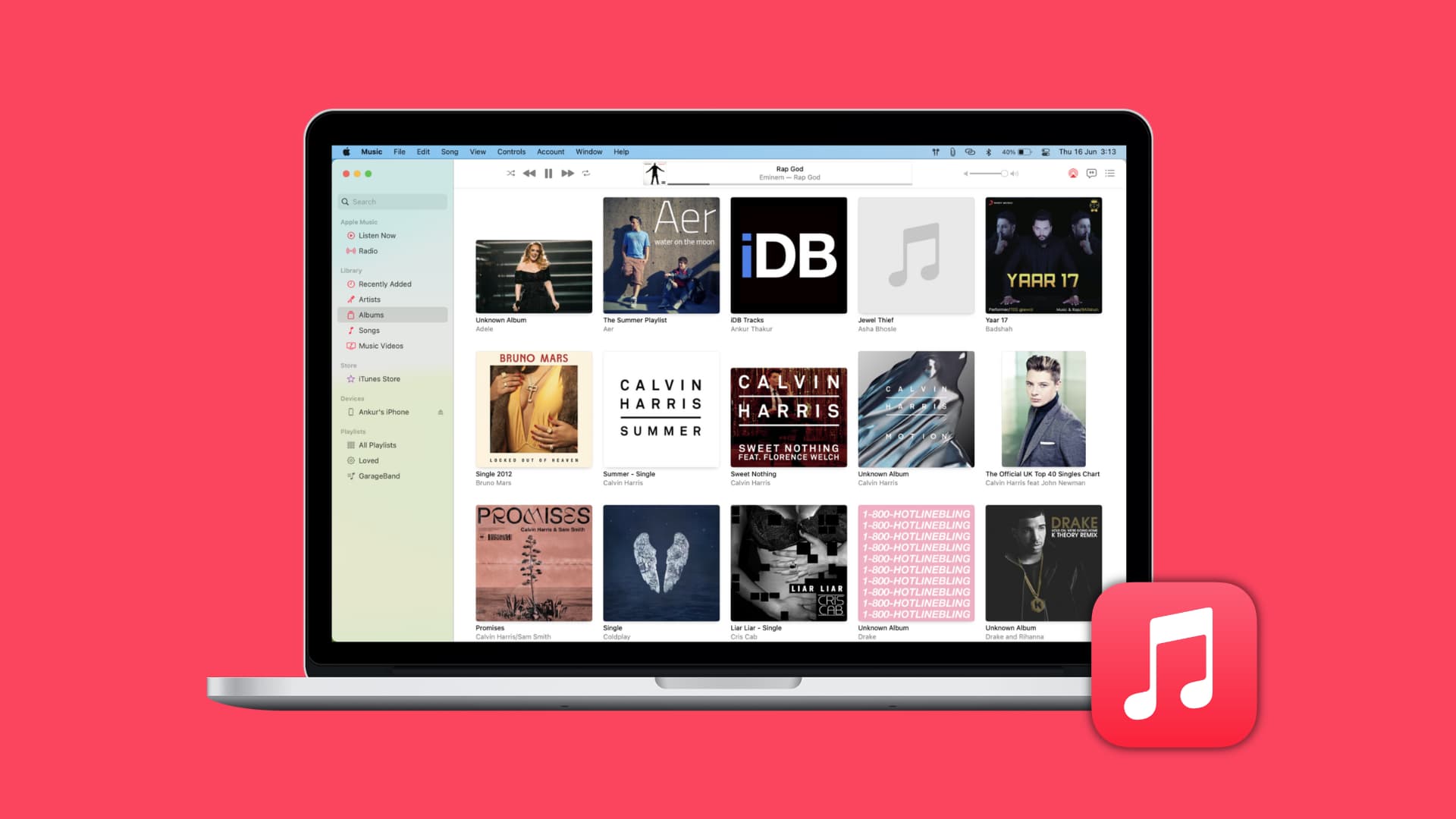 You’ve hopefully learned something new by watching our Apple Music video tips and tricks. The Music app could be better designed—especially as some of its features are buried deep in menus or too difficult to discover on your own, so you’ll need all the help you can get. Read: How to use Spotify offline on Apple Watch

Armed with the knowledge in this tutorial, you’ll learn how to better manage songs you love, discover something new to listen to in a myriad of ways and personalize your experience in the Music app. Watch: The best secret iOS 16 features