Do you need to get a single shot of the entire conversation in Messages? Maybe it’s for something important like a court appearance, or perhaps you want to save a backup just in case you need it down the road.

You can certainly scour the App Store for tools. But we took the work out of that for you. Here, we’ll show you how to screenshot a whole text conversation with a screenshot-stitching tool called Picsew. 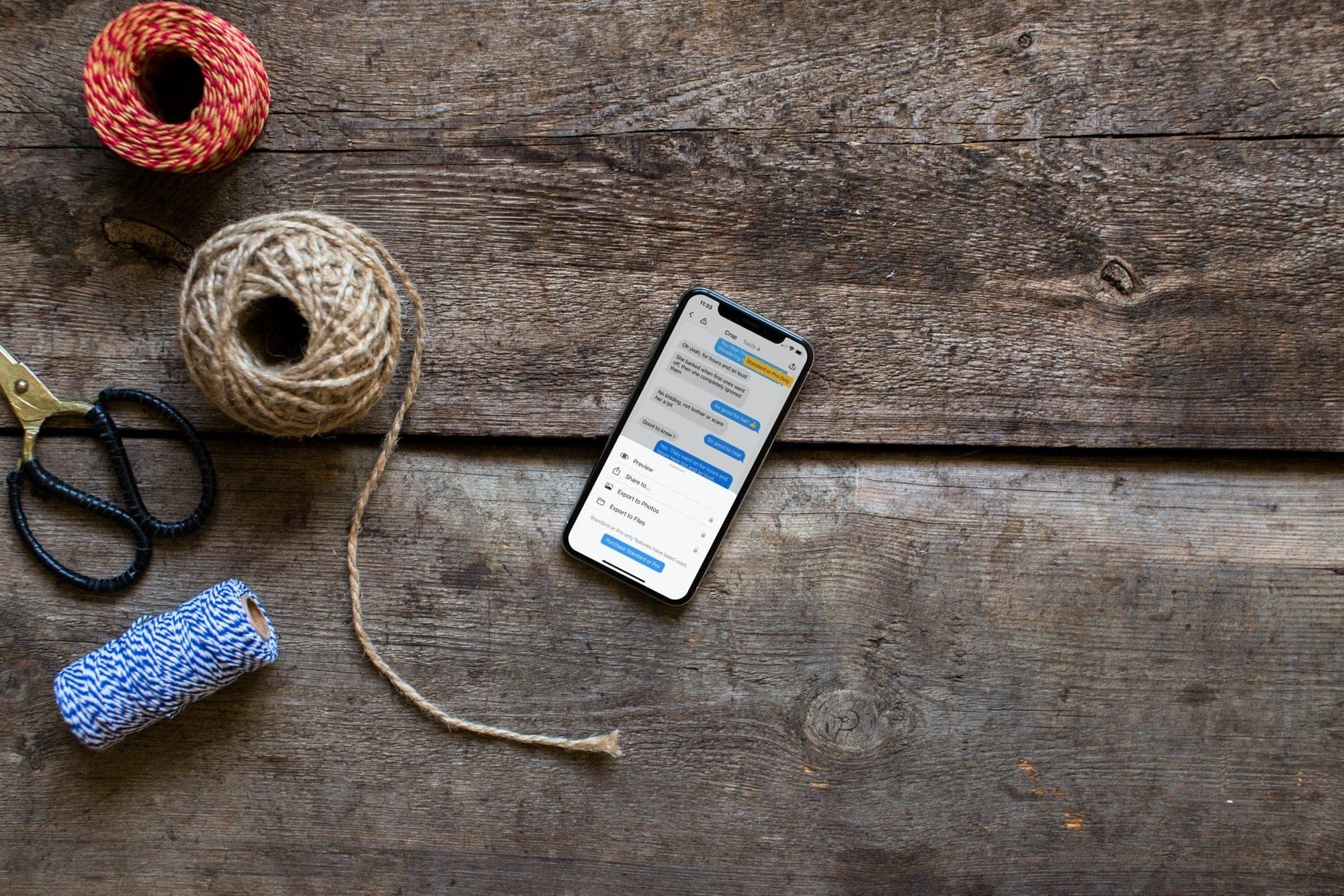 Taking multiple screenshots of your conversation and stitching them together sounds like work. But Picsew does make the process easy. Plus, we’ll give you a couple of other app options so you can try them all.

Since Picsew can stitch together most any type of similar photos to look like a single screenshot, you can use it for other apps. So aside from Messages, you may use it for Messenger, WhatsApp, or another chat communication tool.

1) Take screenshots of your conversation using the buttons on your device as you normally would. Try to move the conversation to points where they will stitch together naturally.

2) Download Picsew, open it, and tap to select your screenshots. Keep in mind the order in which you choose the photos; they will display from the bottom up in the stitched image.

3) Tap Vertical at the bottom for text messages that look like one long scrolling shot. The paid version offers the Scrollshot option, which will stitch your images automatically and Horizontal places them side-by-side.

4) Between the screenshots, you’ll see a dark yellow line with a pencil icon. Tap that to adjust the spacing between the images or remove toolbars, keyboards, and the like. This allows you to place the screenshots exactly as needed. Drag either the upper or lower image to move it and tap the checkmark to seal it in. 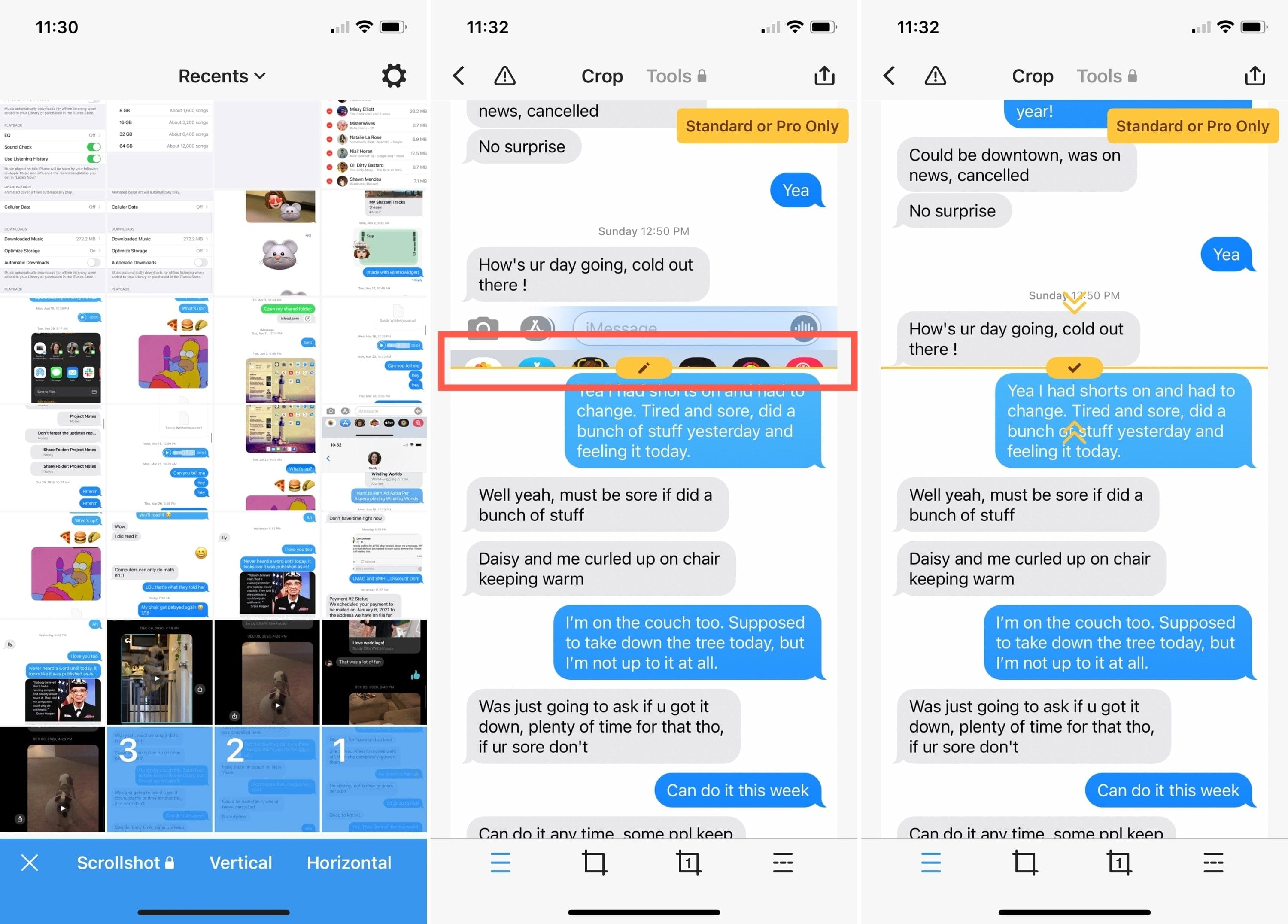 5) When you’re done, tap the Share button on the top right. You can tap Preview to see the finished image, which allows you to go back and change it if necessary. Or select Share to, Export to Photos, or Export to Files per your preference.

It doesn’t take long to get the hang of using Picsew. And you can play around with a few test screenshots before you work on that important one, just to see how it all works.

Picsew is free with an in-app purchase for additional features.

A scrolling screenshot app would be the perfect solution. However, most of these apps simply capture video, which is something you can do yourself with the iPhone Screen Recording tool. And other screenshot stitching apps can be clunky or limited. But for a couple of more options that work pretty well, check these out.

Stitch It actually works wonderfully. It assembles the screenshots for you but allows you to rearrange them if needed. It also crops the screenshots at points that make sense, like removing toolbars.

The downside: You can only stitch three images for free. But if you plan to do this often and need more images, take a look at the in-app purchase.

StitchPics is similar to Picsew in that you have complete control over the lines between the stitched images. So it’s another great option.

The downside: The Auto stitch feature still seems to require manual adjustments, and the interface takes some getting used to; it’s not as smooth as Picsew.

If you need to create one individual image of conversation in Messages or a text thread in another chat app, hopefully, Picsew or one of the other mentioned apps, gives you just what you need.

Do you have a different text thread screenshot solution? Please share it in the comments below!