The Odyssey jailbreak saw a staggered release that first began with a public beta just over a month ago, but as of today, the Odyssey jailbreak is now officially available for avid jailbreakers to download and use to their hearts’ content with no such ‘beta’ tag attached to the name.

The announcement was shared via the official Odyssey Twitter page just minutes ago: 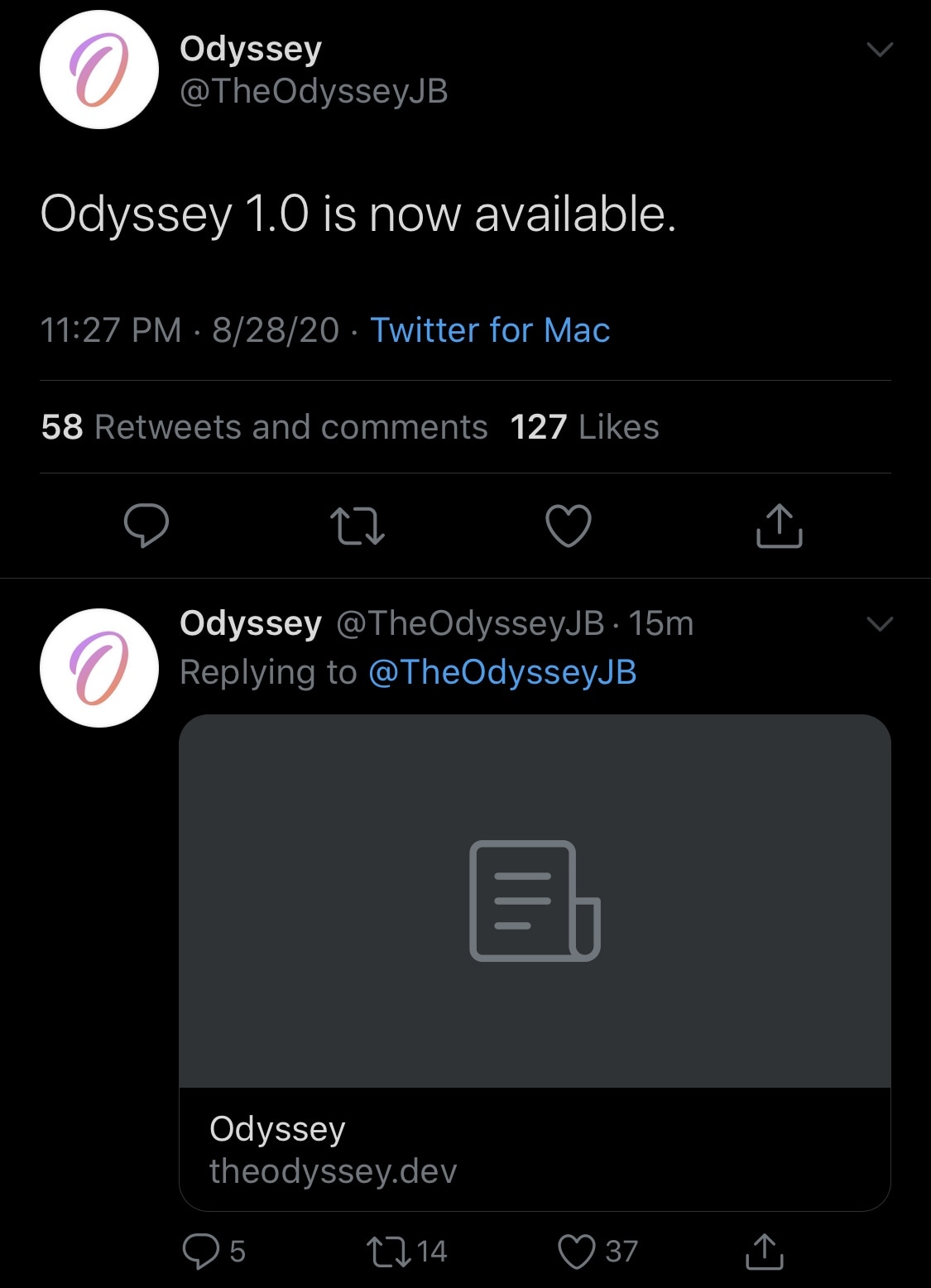 As for how it looks:

The design of the Odyssey jailbreak app, shown above, should look familiar, as it’s largely inspired by the preceding Chimera jailbreak for iOS 12. Users can even theme the app based on their personal tastes:

Right off the bat, it should be noted that Odyssey is a side-loadable jailbreak app that supports A8-A13 devices running iOS 13.0-13.5 and iOS 13.5.5 beta 1. Like all jailbreak tools made by CoolStar-led jailbreak teams, Odyssey pre-installs the Sileo package manager, but what makes this tool unique from those launched before it is that Sileo can be removed and replaced with an alternative package manager, including Cydia, Installer, and/or Zebra.

Notably, Odyssey is built almost entirely with Apple’s Swift programming language and uses the Procursus bootstrap. The jailbreak supports CoolStar’s libhooker framework for tweak injection, which is claimed to be better than both Cydia Substrate and Substitute. This is, of course, often subjected to debate and users of other jailbreaks tend to disagree. We have no official stance on the matter, as our job is merely to report that these tools are available and leave it to you, the user, to decide which one you should use.

It’s also worth bringing up that the Odyssey jailbreak is mostly open source on CoolStar’s GitHub page, an effort to fulfill a promise made months ago in which CoolStar pledged to honor the late @s0uthwes’ memory. The original Chimera13 GitHub page battled with a DMCA takedown request filed by the unc0ver team about a month ago, but was reinstated following a successful appeal.

If you’re already happily jailbroken using checkra1n or unc0ver, then you needn’t trouble yourself with the process of installing a new jailbreak unless you absolutely can’t resist the Odyssey Team’s jailbreak ecosystem. Checkra1n users have the option of using the Odysseyra1n script, whereas unc0ver users can choose to use Odyssey’s newfangled migration feature to move to the new jailbreak experience with ease.

Should you do any of the above? While I’d love to give you a definitive ‘yes or no’ answer, it really comes down to your personal preference. Personally, I don’t plan to move from the checkra1n jailbreak as it comes because I’m used to using it the way it comes. Some may express disapproval with my choice, and that’s their right to do so. Whatever you choose to do, more power to you; choice the entire point of jailbreaking in the first place.

The Odyssey jailbreak can be had from the official theodyssey.dev website and should not be downloaded from anywhere else for security reasons. You can also follow our step-by-step tutorial if you need help jailbreaking with Odyssey.

Do you plan to use the Odyssey jailbreak? Let us know your thoughts about it in the comments section below.